They got the start they wanted, but by the time the final buzzer sounded, the New Westminster Hyacks were saying their goodbyes.
Feb 28, 2019 12:40 PM By: Dan Olson 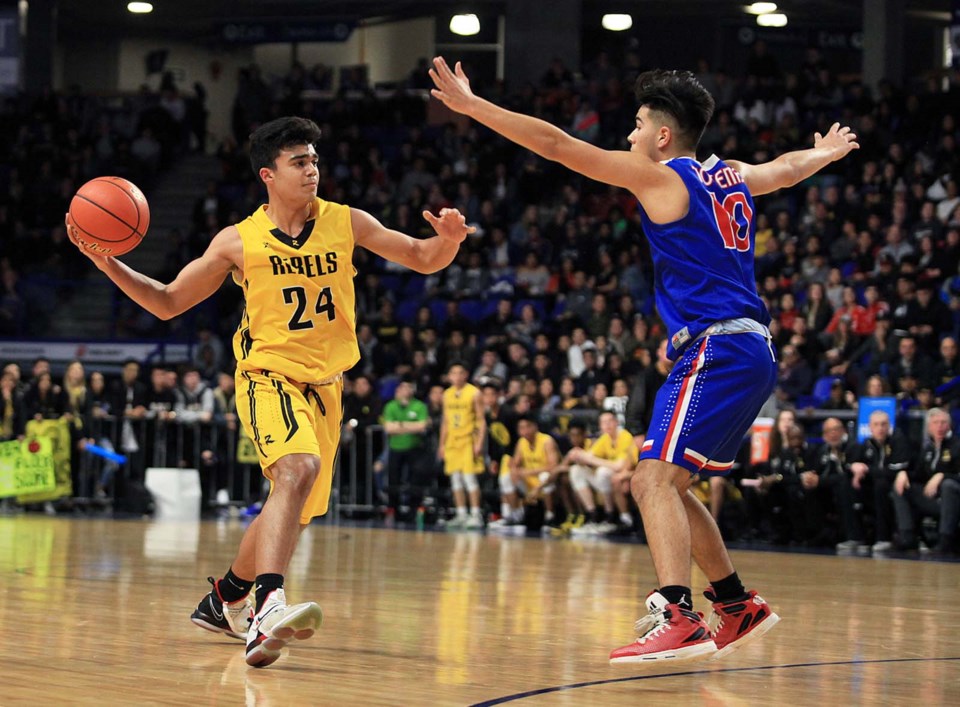 The Burnaby South Rebels' Jiordano Khan prepares to move the ball during last year's B.C. 4-A final. The Rebels defeated New Westminster to keep the run going with an eye on qualifying for another provincial championship.NOW file

They got the start they wanted, but by the time the final buzzer sounded, the New Westminster Hyacks were saying their goodbyes.

The senior boys basketball team suffered a season-ending loss Wednesday at the Lower Mainlands, falling 85-69 to the defending 4-A champion Burnaby South Rebels in the consolation bracket.

Faced with a must-win situation, neither team had room for error. New West came out well and even pressed ahead by eight points in the early going, but by halftime were on the wrongside of a 43-35 score.

The Rebels launched the second half with a couple of buckets through turnovers, then turned on the jets.

“It’s too bad, because we came out and scored like crazy and were looking good at the start,” remarked New West coach Ted Cusick. “We were hitting our shots but then their defence tightened up and suddenly we weren’t hitting them. They’re a good team.”

Down 29-25 after one quarter, New West traded shots and took a brief lead before Burnaby South chimed in with a small streak to take the lead. They came out with the second half’s first three baskets and were soon up by a dozen.

“(Burnaby South’s) big guys gave us too much trouble. We couldn’t stop them,” said Cusick.

The Rebels got 19 points, six rebounds and six steals from senior Justin Sunga, while Kyle Kirmaci tallied 16 points. Chipping in with 15 points and 11 rebounds was Jiordano Khan.

“(Burnaby South) is a legitimate No. 1 team in the province, they are so good and so big,” said Cusick.

Ranked 4th in the most recent provincial poll, the Rebels were knocked onto the consolation side after being forced to forfeit their first game of the Lower Mainlands for using an ineligible player, as ruled by B.C. School Sports. That put them on New West’s side of the draw, with the Hyacks relegated after dropping their second game of the tourney last week to Vancouver College.

Burnaby South now plays No. 7-ranked St. George’s tonight (Thursday), 8 p.m. at the Richmond Oval, in a must-win affair. If successful, they meet the winner of Killarney/Sir Winston Churchill on Friday (4:30 p.m.), with the winner earning the third and final berth to the B.C. 4-A championships in Langley.