Rebels fall prey to Panthers in BC semis

It came down to second chances and who had the hotter shot. Usually those elements are assets for the Burnaby South Rebels, who all season long relished power match-ups like that of Friday's semifinal.
Mar 9, 2019 1:38 AM By: Dan Olson 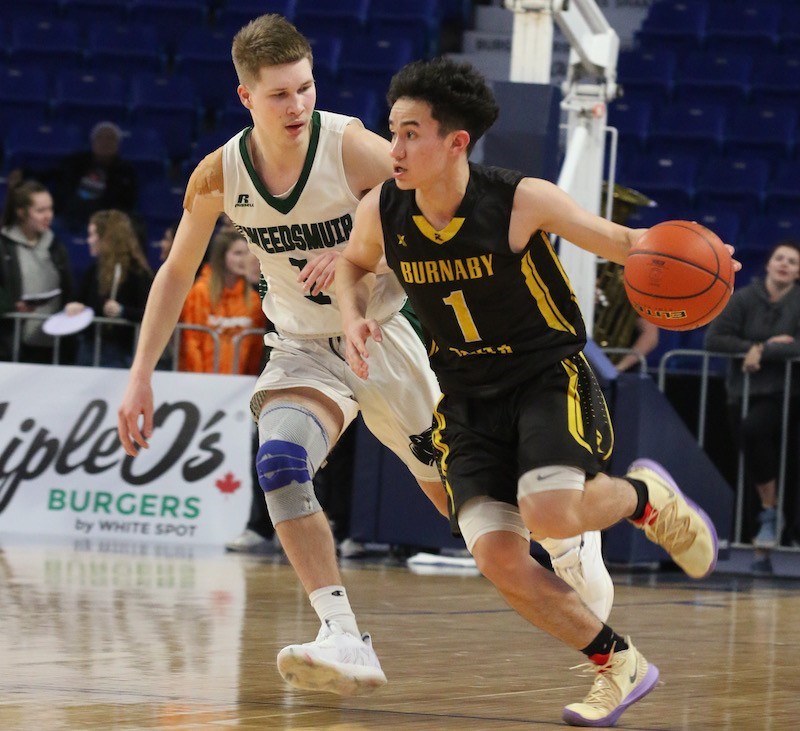 Burnaby South's Kyle Kirmaci, at right, keeps ahead of Lord Tweedsmuir's Austin Swedish during semifinal action on Friday at the Langley Events Centre. The two teams tangled in early December at the Tsumura Invitational tournament, with Tweedsmuir prevailing both times.Mario Bartel/TriCity News

It came down to second chances and who had the hotter shot.

Usually those elements are assets for the Burnaby South Rebels, who all season long relished power match-ups like that of Friday's semifinal. The two had met twice before, each with a win, so familiarity and a rivalry were parts of the equation. It just didn't unfold quite as expected.

The Lord Tweedsmuir Panthers proved more successful on second chances, and delivered in the shots department to stop Burnaby South 75-64, punchng a ticket to the B.C. 4-A senior boys basketball championship final.

Although unsaid and not offered as an excuse, the loss was also a reflection of the absence of the Rebels' six-foot-10 Grade 11 post Sasha Vujisic, who suffered an injury late in Thursday's quarterfinals. It meant Burnaby South was vulnerable both on the boards and in the paint, where so much of Friday's contest was determined.

"We shot the ball really well (Thursday), but we struggled behind the three-point arc and the ball just didn't drop, but our guys kept shooting," remarked Rebels coach Mike Bell. "That's what we do, we shoot the ball. It just didn't happen today."

Vujisic was on the bench Friday but never took off his warm-up jacket, labouring to his seat after each timeout huddle. Without the perennial tourney all-star, Burnaby South had trouble absorbing the frst rebound, instead witnessing Tweedsmuir recover the ball after a failed shot too often and getting a second, and occasionally a third opportunity to make good. That stat line alone -- where the Panthers prevailed 19-4 -- could be the whole ball game summed up.

The Fraser Valley No. 3 qualifier were quicker out of the gate, garnering a six-point lead before Burnaby South closed out the first quarter with a pair of Justin Sunga buckets. The Rebels built on that to start the second frame, with Kyle Kirmaci nailing a three-point shot to give the No. 5-seed squad the lead for the first and only time. Jiordano Khan went on a key-to-key run to make it 18-15, but Tweedsmuir reclaimed the lead with an impressive march of their own, out-scoring the Rebels 15-4 to exit the half up 30-26.

The reigning champions, who defeated Semiahmoo in last year's B.C. final, were just OK in the shooting department over the first half, connecting on 12-of-38 shots for a 31.6 per cent success rate. The Panthers, meanwhile, cashed in on 41.2 per cent of their shots, with Arjun Samra accounting for 14 points.

Displaying the same kind of resilience which earned them a berth to the provincials, Burnaby pulled even in a hurry to launch the third quarter, thanks to a trey from Sunga and a single free throw from Aidan Wilson. It was also the game's first free throw chance.

Once again, Lord Tweedsmuir retook the lead but were unable to get much of a spread until Samra canned a three-point play, followed by Jackson Corneil on a converted steal with three minutes left in the quarter. Trailing by nine, the Rebels cut the deficit to four, thanks to a three-pointer by Matthew Pineda and a putback from Wilson, before Elijah Devison hit a jumpshot at the buzzer to make it 52-46 for the Panthers.

Tweedsmuir tallied nine of the first 13 points of the final quarter, then responded in kind whenever the Rebels battled back. They were unable to shave much off the deficit over the final three minutes, with the Panthers going 10-for-14 from the penalty stripe to end the game and earn it's first spot in the B.C. championship final.

Samra led all shooters with 35 points, while Devison was the only other teammate to score double digits, with 15 points. Tweedsmuir had three players -- Josh Hendricks, Corneil and Samra -- collect 11 rebounds apiece.

Having racked up 38 points, 31 rebounds and five blocks over the first two games, Vujisic's presence would certainly have made a difference. But, as Bell noted, the two teams met earlier in the season when Vujisic was sidelined due to injury so it was a case of others filling the void. Only Tweedsmuir filled it first.

"We played them like this (without Vujisic) already so we made a little adjustment," noted Bell. "We were going to have Aidan guard (Devison) who has a great midrange (shot), and we thought that would give us a bit more advantage to get to the boards where (Corneil) plays a lot of the perimeter and likes to penetrate on bigs.

"(Corneil) uses that to his advantage, he's very crafty that way. ... I thought Jio did a great job (checking Corneil) but we gave up too many second chances. We kept having to come back but the effort just wasn't there and the shots weren't there with it. That's the result you get."

Burnaby South will face No. 3-seed Terry Fox Saturday, 4:45 p.m. in the third-place game at the Langley Events Centre.

"We've got Grade 12s going to graduate so we have to make sure we go and compete in the next game," said Bell. "Whoever that is, we want to go out with the W at the end of the day. Let's go out and compete."

The seniors led the way as only seniors can, boosting the Byrne Creek Bulldogs past Steveston-London 85-70 to advance to play for ninth place at the B.C. 3-A senior boys basketball championships in Langley.

Thanks to big games from Sufi Ahmed, Bithow Wan and Chidubem Nkoloagu, the Bulldogs never looked back after taking the early lead.

Byrne Creek led 25-17 at the first quarter mark, and were in firm control by halftime with a 50-33 advantage.