Rebels get healthy with playoffs looming

Not even a slight cold snap could dampen the best news of this week for the Burnaby South Rebels.
Jan 23, 2019 7:05 PM By: Dan Olson 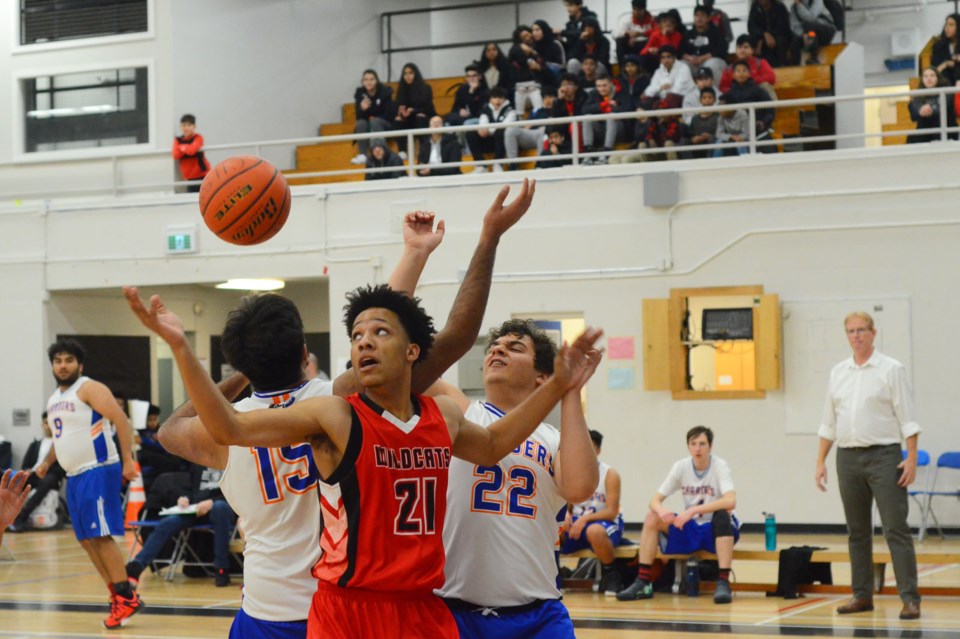 There are still things up in the air as the Burnaby-New West senior boys basketball season heads into its final week. Both the Burnaby South Rebels and Byrne Creek Bulldogs stood undefeated at NOW deadline, while Burnaby Central and Cariboo Hill, pictured above, are on the outside of the top-six.Cornelia Naylor

Not even a slight cold snap could dampen the best news of this week for the Burnaby South Rebels.

The senior boys basketball team put it's healthiest lineup on the floor in Monday's 77-58 triumph over the Cariboo Chargers, with the return of provincial all-star Sasha Vujisic.

The 17-year-old star centre, who was injured in the first week of the 4-A hoop season, counted 17 points, while teammate Jiordano Khan cashed in a team-high 18 points. Along with the contributions of Aidan Wilson, who chipped in a dozen, that's a great sign for the coming stretch drive.

Burnaby South currently holds down the No. 6 spot in the provincial poll, but having spent nearly two months without their six-foot-10 centre, and having missed both Justin Sunga and Wilson for parts of the past few weeks due to injuries, the ranking is a definite snapshot of what's past. All focus now is on the future.

On Wednesday, they followed the win over the Chargers with a decisive 82-52 victory over Burnaby North, improving to 5-0 in league play (and 17-3 overall).

The defending provincial champions enter the final week of league play with plenty to be positive about, including results wise.

Over the weekend the Rebels rolled right into the final of the Abbotsford Snowball Classic tournament, where Washington State's Mount Vernon proved to be an excellent test. The Americans prevailed 95-77, thanks to a good run in the third quarter. At haltime, Burnaby's boys trailed by just six points, getting 15 points from Sunga and nine by Baltej Sohal.

It came on the heels of a 81-73 decision over W.J. Mouat in the semifinal, where Burnaby South erased a 10-point deficit in the third quarter to take a 56-55 lead into the final frame. Sunga finished with 25 points and four boards, while Sohal counted 23 points, including 17 in the second half. They earlier defeated Belmont 78-68, getting 21 points from Matthew Pineda.

The Rebels head into the season-framing battle with fellow undefeated Byrne Creek on Monday (5:15 p.m. tipoff) in a showdown for first place.

Other league teams are also on the move.

The Burnaby North Vikings registered their second win of the regular season earlier this week, edging Moscrop Panthers 79-73. Curtis Alsop tallied 25 points and recorded 18 rebounds, while Jay Esquivel notched 20 points and three blocks. New Westminster blasted Burnaby Central 108-52, while Alpha spun a solid 95-86 victory over Burnaby North two weeks ago into a good string of games on the weekend at the Bob Carkner Memorial tourney in Richmond. The Aztecs topped host Steveston-London 87-86 in overtime, and pushed Lord Byng into extra time before falling 73-66.