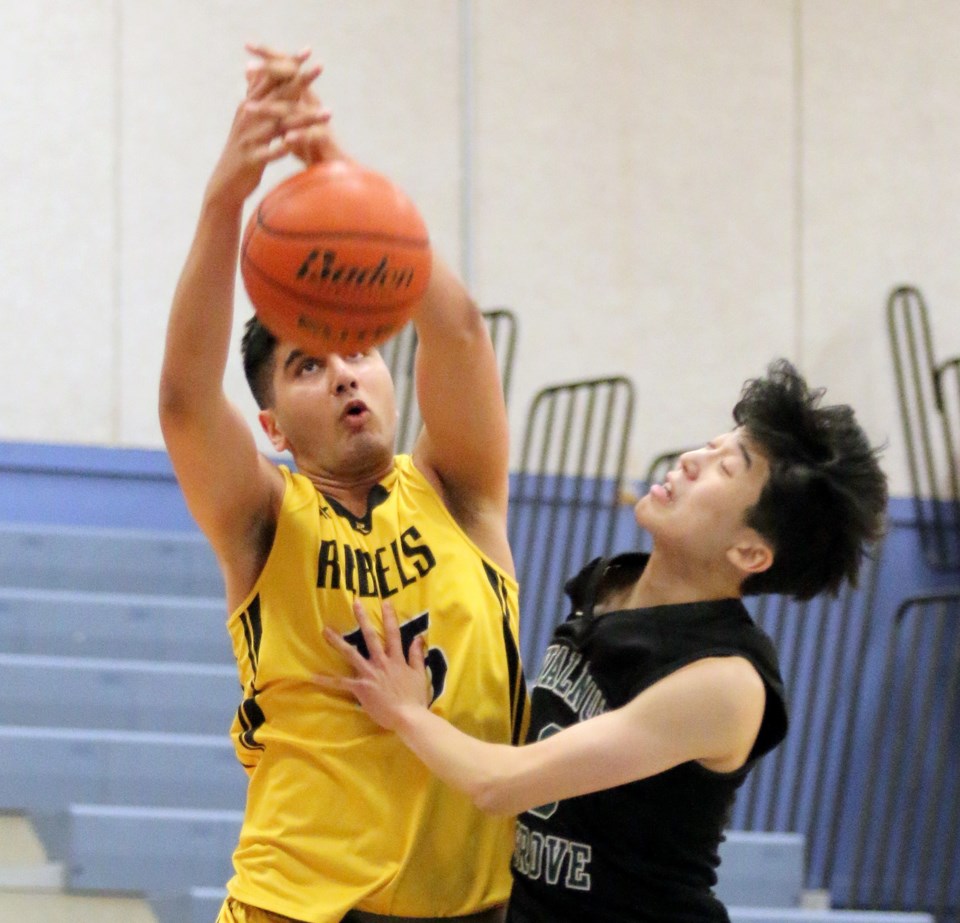 Burnaby South's Karan Aujla, left, battles a Walnut Grove defender for the ball during a game in Coquitlam two weeks ago. The two teams met again on Wednesday, with the Rebels recording another win.Mario Bartel/TriCity News

The Burnaby South Rebels may not be No. 1 anymore, but they’ll no doubt take it as a challenge.

After suffering their first setback of the 2019/20 senior boys 4-A high school basketball season, the Rebels jumped right back on the horse Monday and got back in the winning way, topping Burnaby Central 76-56 in the inaugural sr. boys Burnaby-New West basketball league opener.

Powered by Grade 10 post Karan Aujla’s 24 points, Burnaby South charged out of the gate early and were in full control, leading 22-0 after 10 minutes.

The visiting Wildcats did get on the board and out-scored the Rebels 18-17 in the second quarter to trail by 21 at halftime.

Burnaby South would respond and grow its lead to 31 points before the start of the fourth frame.

Contributing 14 points in the win was another Grade 10, guard Jimmy Zaborniak, while Jareb Pineda and Eric Li counted seven apiece.

Coming off an impressive but not perfect run through the Tsumura Invitational last week in Langley, the league decision was a reaffirming decision.

They closed the four-day Langley-hosted tourney by stopping Duchess Park 81-63, thanks to Zaborniak’s 26-point performance. Justin Sunga was close behind with 25 points, while Aujla joined the 20-point club as well.

The first loss of the year came Friday in the semifinal, when Kelowna cashed in a pair of last-second foul shots to edge Burnaby South 78-77 for a spot in the final.

Trailing by 14 points at halftime, the then No. 1-ranked Rebels cut it to a single point with 10 minutes left, only to witness the Owls go on a 15-3 run. Non-plussed, Burnaby’s boys responded with a 14-0 streak of their own to go ahead 77-76.

But Jarred Taylor scored on both foul shots with two seconds to play to give No. 2-ranked Kelowna the win.

It came on the heels of a solid 74-62 win over No. 5-rated Claremont. Sunga led the squad with 25 points, while Aujla counted 18 points.

The Rebels, who defeated Walnut Grove 64-57 on Wednesday, will host Moscrop on Monday (8 p.m.), before launching into their Rod Thomson Tournament next Wednesday with a game against Frank Hurt.

In their own twist on the turtle and the hare fable, the Burnaby North Vikings gave the rival New West Hyacks something to mull over after Tuesday’s league-opening senior boys basketball game.

By erasing a 26-point deficit over the final quarter and pull out a dramatic 76-74 victory home court win, Burnaby North made the “show up when it counts” meme stand large.

Led by Grade 12 point guard Jay Esquivel’s 31 points, the Vikings out-scored New West 30-2 over the final 10 minutes, with the team captain draining the game-winning points from the foul line with just two seconds on the clock.

It certainly didn’t start off well for the hosts, however. The Hyacks, fresh off a 1-3 run at the vaunted Tsumura Invitational, powered ahead of the Vikings 50-31 at halftime. They expanded that lead to 72-46 after three quarters, and appeared ready to reach triple digits.

But, as North coach Charles Kwon notes, a different tactic and a more deliberate approach helped flip the score.

“Being down by 26 after three quarters, the boys were rushing. They were panicking,” recalled Kwon. “They felt that time was running out and had to do everything at 100 (miles per hour). But I disagreed. I told them to ‘slow it down boys. When we rush, we make mistakes’.”

The team also managed some favourable matchups after the Hyacks heavily subbed their starters to start the final frame.

Kwon kept centre Jason Sawyer, despite his four fouls, in the game and working the inside. Dante Beciaris, Kudzai Munopo and Filippo Sampaolo were tasked with playing tough defence as well as rebound, while swingman Sobha Sangha helped drive the ball forward.

They cut the score to 74-71 with barely a minute remaining, and needed a big shot to close the gap. Esquivel pulled the fans to their feet when he drained a game-tying three-pointer with 20 seconds on the clock.

He’d force a turnover with eight seconds to play and get inside the key, drawing a foul that would seal the deal.

“We didn't win the championship, but defense won our first league game,” Kwon said. “New West only scored two points in the fourth quarter and we went on a 30-2 run. At the same time, we had zero fouls (in the quarter).”

Following a handful of exhibition losses, getting the inaugural win out of the way, in the first league match, was a big boost for the squad, remarked the first-year coach.

“(I) told the boys last night, ‘Remember, the season is not one-game long. We have seven more leagues games, tournaments, exhibition games and then playoffs. Yes, you guys are happy and excited about our comeback win tonight. But everything will be forgotten if we don't play well (Wednesday) against Mountain.’”

In other league games on the schedule, Moscrop, which opened the season last week with a 52-48 win over Burnaby Central, visits Alpha.