Rebels regroup after ruling slaps them out of semis

It’s the perfect spot for the clichéd quote “It is what it is.” To Burnaby South Rebels head coach Mike Bell’s credit, he never turned to that. The beleaguered senior boys skipper said that the confluence of issues which tossed the No.
Feb 25, 2019 4:24 PM By: Dan Olson 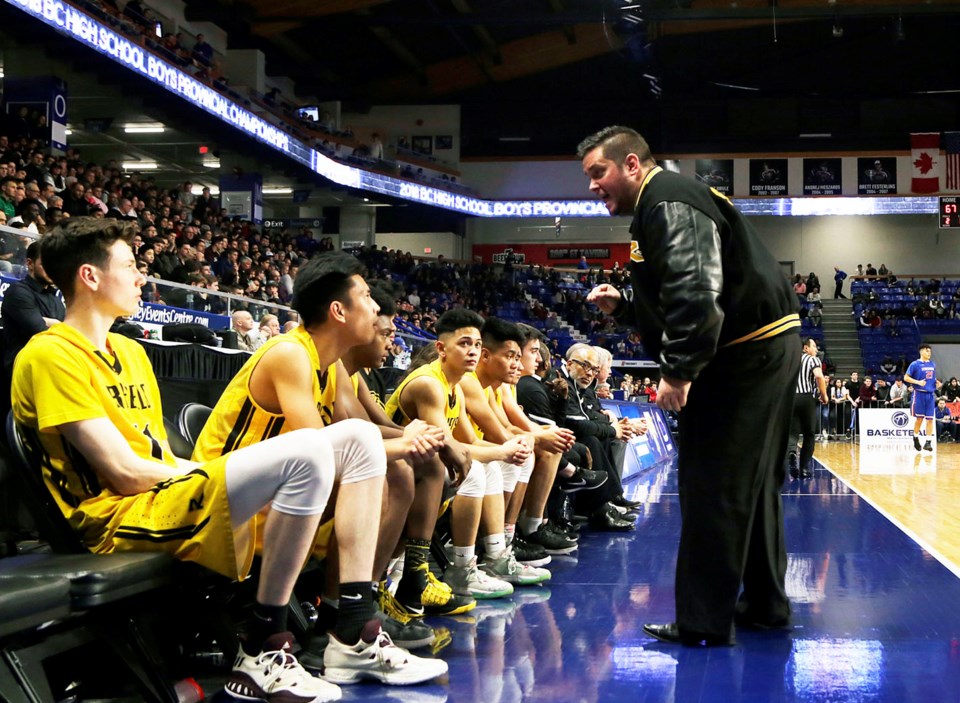 Burnaby South coach Mike Bell addresses his Rebel players during last year's B.C. 4-A basketball championship final. The defending provincial champions face a stiff challenge with no room for error to get back to the B.C.s, after having to forfeit their quarterfinal win due to B.C. School Sports' ruling on an ineligible player.NOW file

It’s the perfect spot for the clichéd quote “It is what it is.”

The beleaguered senior boys skipper said that the confluence of issues which tossed the No. 2-ranked Rebels back a step in its Lower Mainland tournament travels, due to B.C. School Sports ruling the team used an ineligible player in a quarterfinal win last week, is not going to shake the team off its target.

But he admits the ruling, and the fact the squad was thrusted into a must-win game last Friday with a day’s notice after appearing to have sailed into the 4-A Mainland semifinal, did create a stir.

“It took us all by surprised,” said Bell, of the ruling that Grade 11 Emir Krupic, who dressed for the squad’s 96-64 victory over Killarney on Feb. 20, was actually ineligible due to having played earlier this season with a Seattle-based prep school team.

It meant Burnaby South forfeited the game to Killarney, and forced them into a must-win against Burnaby North. The Rebels took down the Vikings 96-57, and now meet New Westminster for the third time in the past six weeks in another do-or-die game on Wednesday (6:15 p.m. at the Richmond Olympic Oval).

Bell said his crew performed admirably in the win over Burnaby North, considering that not only had they been pushed to the longer route with one strike against them, but that some were using the decision to suggest the program had tried to skirt the rules.

It couldn’t be further from the truth, he said.

“We were told (by B.C. School Sports) that he was eligible on Feb. 14,” said Bell. “On Feb. 20 we had a conversation where they said he did play for (a prep school). In my prior conversations (with the Seattle school) I was told that it was not a prep school, that it was a post-graduate academy.

“I wanted to make sure, but things changed from when I was told that it was just a club (team), then a prep school. … We wouldn’t have played this player if we thought he wasn’t eligible.”

No matter where the miscommunication came from, it falls on Bell's shoulders. He credits his players for not letting the setback dissuade them from their goals or detract from what they've already accomplished.

Instead of staring at two chances to win one of the Mainland’s two berths, the Rebels find themselves one-game into a four-win gauntlet, where they face additional wear and tear. Should they beat New West on Wednesday, they’ll square off Thursday against the semifinal loser of the Kitsilano-St. Georges game – who were ranked No. 4 and No. 7 in B.C., respectively, and then face another game Friday in the third-place battle. One loss along the road will end their hope of defending last year's B.C. title.

Doesn’t seem like an option any team would choose.

“We have a bunch of hard-working men who played through a long season to get that No. 2 ranking. You never take anything for granted, but we’re going to work through this,” said Bell.

“We’re definitely trying to turn this into a positive the best we can.”

In the league playoff final two weeks ago, the Rebels topped the Hyacks 94-64.

Krupic returned to Burnaby South in January after attending the Port Coquitlam-based B.C. Christian prep program in 2017/18, and starting the 2018 school year at the Elite Sports Academy in Issaquah, Wash. He was a major contributor, as a Grade 9, to the Rebels’ junior provincial championship win in 2017. He is now ruled ineligible to play at Burnaby South until next January.

Despite the additional hurdles they find themselves behind, Bell believes his team is more galvanized than ever for the coming challenges.

“I’m still as confident as when we started. We only have three losses all year to B.C. teams, so there’s no reason that we can’t build on this.”