Rebels rise with 'next man up' attitude 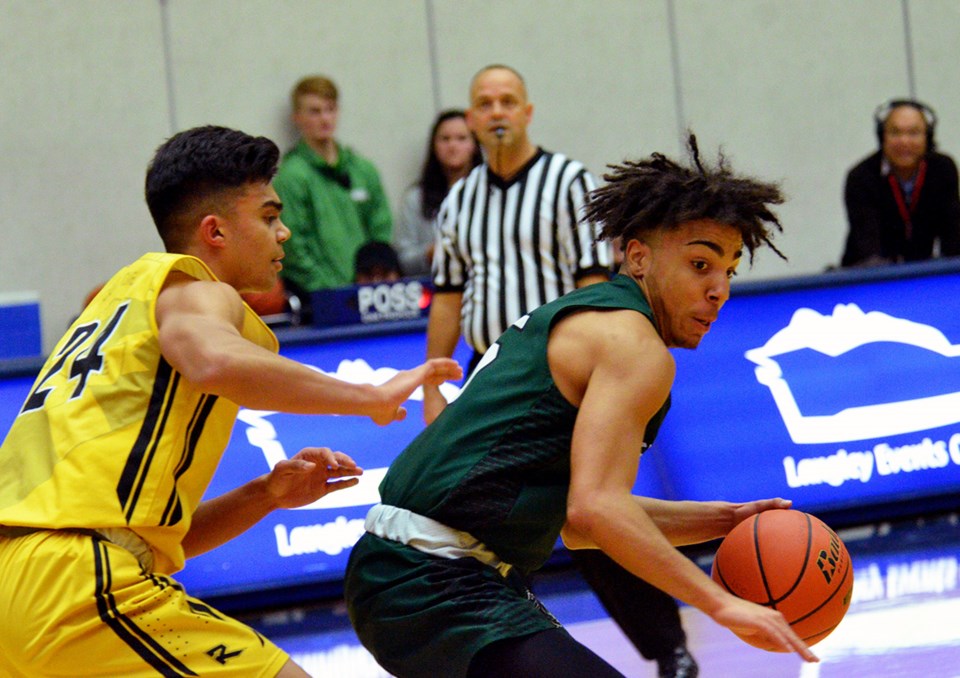 Burnaby South Rebels' Jiordano Khan, shown at left during the season-opening Tsumura Invitational, was a main contributor in Tuesday's semifinal victory over Burnaby North. The Rebels will face New West in the Burnaby-New West league final on Monday.Gary Ahuja/LEC

It’s come down to two.

The South Rebels bested Burnaby North 93-54 with a well-rounded effort that saw the team draw on everyone to contribute.

“We’re very happy with the effort, how the guys came out strong right from the start,” remarked Burnaby South coach Mike Bell. “Our big guys had big games and we ran everyone in the game.”

Sasha Vujisic finished with 23 points – 19 in the first half – and seven rebounds. Vujisic also racked up eight dunks in the first half, raising a lot of noise from the home crowd, while fellow big-man Aidan Wilson chipped in three. Jiordano Khan also had a strong game.

Although both his big men – six-foot-eight Wilson and six-foot-10 Vujisic – are back in sync after missing some games due to injury, the team has had to adjust to the absence of guard Baltej Sohal. The Grade 12 versatile guard has been a major driver on offence during much of the season, especially when Vujisic was injured and Khan had to shift more to a forward role.

Khan, back in his No. 4 spot, rose to the occasion.

“Jio had an unbelievable game. He really stepped up with Baltej out,” noted the coach. “It’s been the way the season has gone, and we really depend upon a ‘next guy up’ approach.”

In the other semifinal, both teams held the lead in the fourth quarter before New West emerged with an 89-84 decision.

Although the Hyacks, who sat as the No. 3 seed entering the playoffs, were up by as much as 10 in the third quarter, Byrne Creek was true to their moniker, biting back to take a 76-75 lead in the fourth quarter.

New West regained the momentum and steered the game slowly to their advantage, thanks to a string of free throws by captain Mo Al-Ghreibawi.

“Everybody did their part,” remarked Hyacks coach Ted Cusick. “We didn’t rely upon one guy to do all the scoring or defending.”

Luke Burton and Al-Ghreibawi led New West shooters with 23 points each, while Ethan Rivas counted 16 points and 20 rebounds. Kirk Bothwell chipped in with 10 points and 10 boards.

“New West played great,” noted Byrne Creek coach Bal Dhillon. “We shot the ball well, but they rebounded very well. ... We have some things to work on.”

The Bulldogs, ranked No. 10 among 3-A programs, has already clinched a bye into its Lower Mainlands.

In the qualifying round, New West knocked off 2-A Cariboo Hill 89-62. Ajay Virk cashed in a game-high 29 points for the Chargers, with Harjap Dhaliwal counting 21 points.

Burnaby North won a tight battle with Alpha, emerging on the right side of a 74-72 thriller. Nic Daantos led the Vikings with 18 points, while Daniel Kim contributed 12 points.

Burnaby South headed to Kelowna on Wednesday to play in the Western Canadian Classic tournament. It opens today (Thursday) with a game against Alberta No. 4-ranked Cardston.
“We expect to see a lot of good teams, it should be a good bonding experience right before the playoffs,” Bell said. “The team’s been bonding really well and this is just more of the same.”

Although the team expects to be without guard Baltej Sohal, who has enjoyed a breakout season as a Grade 12, due to injury, Bell is hopeful he’ll be back in the lineup for the Lower Mainlands.

The league final is slated for Monday, 7 p.m. with New West playing at Burnaby South.