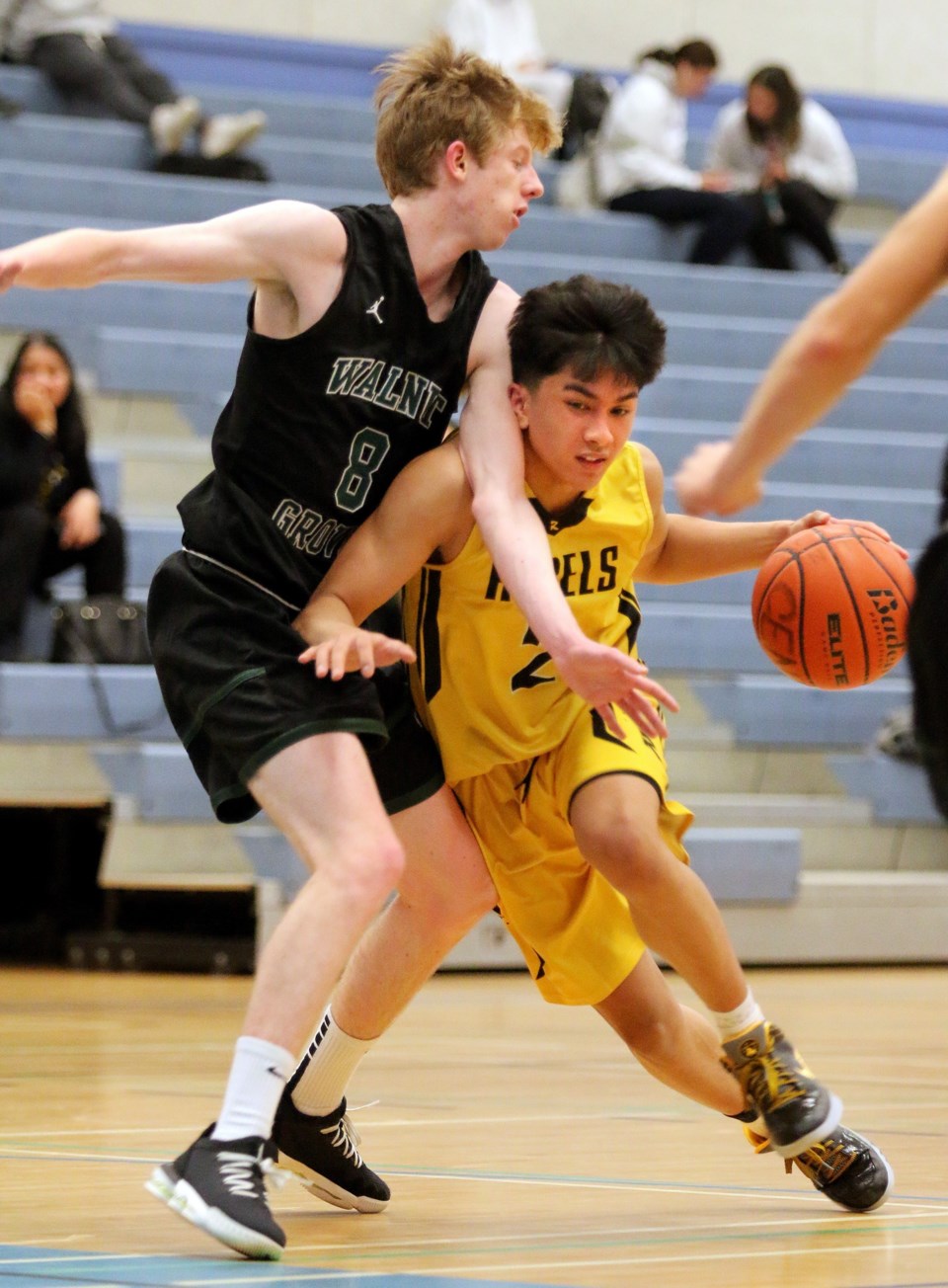 Chalk up another big win for the Burnaby South Rebels.

The No. 3-ranked team in B.C.'s senior boys 4-A circuit, the Rebels successfully played host-with-the-most at the Rod Thomson Memorial Rebels Classic last week, wrapping up the three-day event with a decisive 80-66 triumph over Heritage Woods Kodiaks in the final.

The Burnaby squad broke out quickly, leading 36-10 after 10 minutes, with Jareb Pineda setting the tone with 12 points and Jimmy Zaborniak adding 11. They'd increase that lead to 34 points by halftime, then entered the final quarter up 74-48.

Powered by an MVP-worthy performance from guard Justin Sunga, the team had rolled past Tamanawis on the second day 74-53. After holding a precarious 35-30 advantage at halftime, the Rebels out-scored the Surrey squad 19-8 in the third quarter to set the tone the rest of the way, with Karan Aujla counting 18 points over 30 minutes.

They launched the tourney with an 86-73 victory over Frank Hurt, getting 14 points from Sunga.

Aujla would be named the Best Defender of the tourney, while Pineda joined Heritage Woods' Nariman Avakoli and Nik Bartulin, North Delta's Sagar Ranouta and Tamanawis' Arbin Dillon as tourney all stars.

Two other Burnaby teams also tested their mettle at the Rebels Classic, with Burnaby Central finishing with a 1-2 record.

They opened the series with a 82-49 loss to Tamanawis, and fell 67-50 to Frank Hurt on Day 2. In that contest, the Wildcats were tied 27-27 with Hurt at halftime, with Kendrick Manalastas counting 11 first-half points. But the Surrey school outscored Burnaby Central 40-23 down the stretch.

The Wildcats wrapped up the tourney by defeating crosstown rival Burnaby Mountain 91-72, breaking open what was a three-point game at halftime. Manalastas would be named player of the game with a 25-point performance.

Burnaby Mountain kicked off the tourney with a tough 102-31 loss to honourably mentioned Heritage Woods, and fell 75-43 to G.P. Vanier.

Only No. 1-ranked Walnut Grove spoiled the party, walking off with a 64-49 decision over Burnaby in the duel with the No. 2-rated Rebels on Friday.

It was a tight final, with the Gators leading 30-29 at halftime. Burnaby South got 13 points from Brady Lau in the first half, but Walnut Grove held a 33-20 advantage over the second half to protect its provincial leading ranking.

To advance to the final, the Rebels knocked down Kitsilano 73-45. Petalcorin cashed in 15 points and picked up the player of the game honour. Earlier, Burnaby South stopped Panorama Ridge with a convincing 73-50 win, getting 22 points from Zach Chan, and opened the tourney by beating Archbishop Carney 76-36.

The Burnaby Central Wildcats would place 10th overall after showing well in three tight games. They fell 55-45 to Robert Bateman on the final day. After dropping a 47-44 decision to St. Thomas Aquinas in the opener, the Wildcats scratched out their lone win, a 63-53 victory over Frank Hurt on Day 2. Marcell Sherwood was named the team's Player of the Game on the strength of a 23-point performance.

Coming in 11th overall were the Burnaby North Vikings, thanks to a 48-43 triumph over Steveston-London. Player of the Game Cayden Liang supplied crucial leadership, while chipping in with seven points.

They kicked off the tourney in a 50-36 loss to Sir Charles Tupper, but bounced back to edge Heritage Woods 52-50, getting 12 points from Jonathan Yang. They also came up short against Robert Bateman in a 57-51 tilt.

The Burnaby Mountain Lions, meanwhile, posted a 1-3 run at the tournament, with the highlight coming in a 47-36 win over Heritage Woods on Day 3. Ryan Male counted 15 points, as the Lions built on a five-point lead at halftime with a solid second half.

They opened the tourney with a tough-luck 46-41 loss to Carson Graham, followed by a 52-28 setback to Robert Bateman. They finished the week with a 49-43 defeat at the hands of Archbishop Carney.