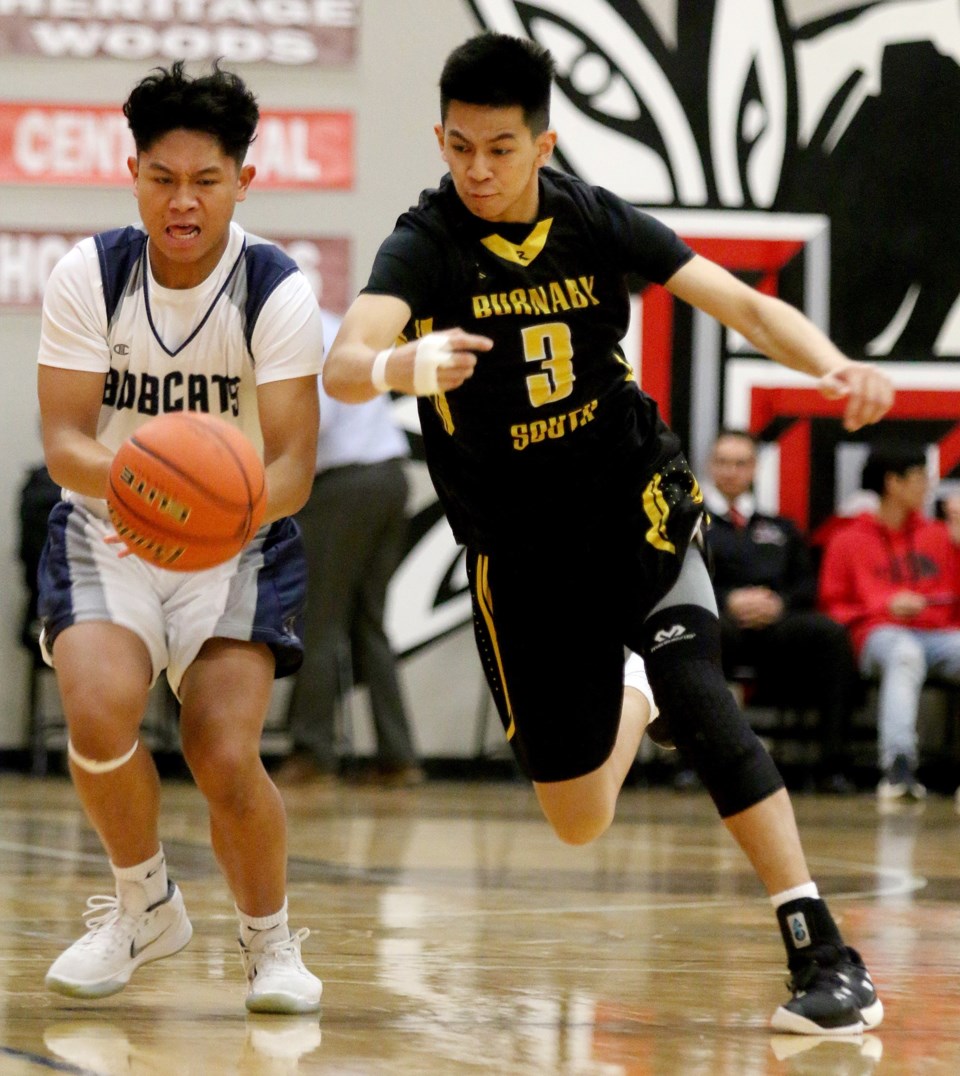 In a game of high stakes poker, what is gained with one hand can be quickly be lost on the next.

It’s just as true when played out on the hardwood.

What the Burnaby South Rebels displayed in a rousing first-half start at the Jonathan Taylor Legal Beagle Invitational final, the Centennial Centaurs equalled it and then some over the final two quarters Saturday.

When the smoke from this showdown between the No. 1 vs. No. 3 provincially-ranked squads cleared, the Cents retained their sheen with a well-played 66-60 triumph at Terry Fox Secondary.

The takeaway from Burnaby’s vantage point was how great it is have such tough competition at this stage, and how much further they want to get in their on-court consistency before next month’s playoffs.

“We have to come together, get that team chemistry and not just play off of pure talent,” remarked Rebels coach Mike Bell. “We have to learn to play together. It’s still early in the season and we’re starting that peak that we need to climb, but that’s a good team we played against.”

The game’s ebb-and-flow saw Burnaby exited the first quarter ahead 19-17, thanks to a rocket-start on 13 points from Emir Krupic (seven) and Sasha Vujisic (six). Grade 10 post Karan Aujla would put up eight points in the second frame to help, the Rebels build a nice 12-point lead at halftime.

It was a completely different scene in the second half, when Centennial outscored the Rebels 23-9 over the third quarter, and continued with the first six points of the final frame.

Although Burnaby South climbed back within two points on Krupic’s lay-up with four minutes to play, the Coquitlam squad clamped down and took advantage of their free throws to put the win in the bank.

“Completely (different half). We held them to 28 (in the first) and then they held us to 20 – that’s a good, well-coached team,” said Bell of Centennial.

“We just have to come out and compete better. Even though we got the lead there in the first half, it wasn’t our best half. The second half was even worse. They came back and pushed, and we just didn’t have any push back.”

The tandem of Sasha Vujisic and Krupic topped Burnaby South with 14 points each, while Justin Sunga netted 11 points. Jareb Pineda and Sunga were named to the first all-star team, while Vujisic picked up a second-team honour.

The tandem of Vujisic and Krupic had its moments where it controlled the pace, but were unable to maintain that tempo against a quick transitioning rival like Centennail, at least on this day. If either was feeling a bit of rust or heavy legs as the final wore on, it would be understandable. Vujisic had played a handful of games previously, but missed the first month of the season as well as the preseason training while recovering from an injured ankle suffered during last year's B.C. high school championships. Krupic, meanwhile, was making his 2019-20 debut after having been tabbed with a 11-month suspension last February after playing in a game that he was later ruled ineligible for by B.C. School Sports. The ruling committee decided that the Burnaby native had competed for Seattle-based Elite Prep program in the fall of 2018, thus making him ineligible to play last year in B.C.

That suspension was also accompanied by a default loss in the Lower Mainland tournament opening game for the Rebels.

Understandably, Kupric came out on fire, eager to play with the team on Saturday.

“He was happy to get out there. It’s Emir’s first game, trying to feel where he fits in and try not to step on too many toes obviously early," said Bell.

To get to the Legal Beagle final, the Rebels defeated host Terry Fox 81-61.

Sunga counted 27 points in the win, while Vujisic, who made his season debut just a handful of games earlier after rehabbing from an ankle injury suffered in last year’s provincials, tallied 14 points.

Burnaby South, which maintained its undefeated record in Burnaby-New West league play Monday with a 111-52 victory over Cariboo Hill, is slated to play either G.P. Vanier or Yale in their first game at the Abbotsford Snowball tournament, which begins today (Thursday).

While the playoffs are not far off, Bell is confident that the many positive signs the group has shown – often with great success – still has room for improvement.

“We still have the Snowball (tournament), we still have (Western Canada tournament in Kelowna, Feb. 6 to 8), so there’s still lots of time to grow. It’s a new year and you don’t want to be peaking yet. The loss isn’t a bad thing. We can learn a lot there from what we just saw,” he said.