The road to gold for the Burnaby South Rebels last year was one of paved with personal discovery and a lot of hard work. There was also a dose of disappointment.
Nov 29, 2018 3:44 PM By: Dan Olson 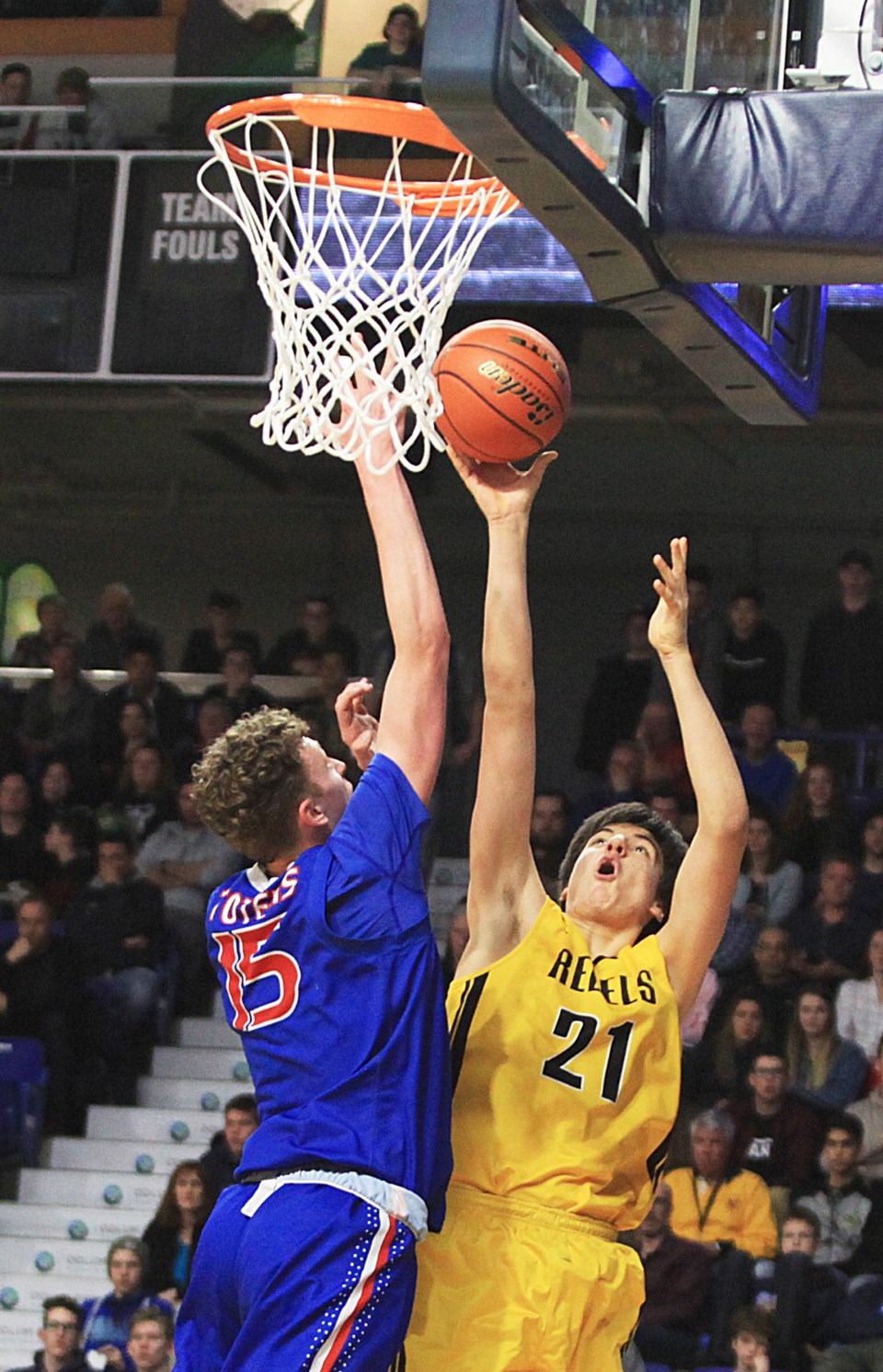 Burnaby South's Sasha Vujisic, shown above putting up a shot during last spring's B.C. 4-A basketball championship final, is using some on-court disappointments as fuel to begin the new season.NOW file

The road to gold for the Burnaby South Rebels last year was one of paved with personal discovery and a lot of hard work.

There was also a dose of disappointment.

But it ended with the meteoric rise at the provincial AAAA senior boys basketball championships, where Burnaby’s boys knocked off Semiahmoo 80-72 to claim the program’s first B.C. title since 1979.

As a Grade 10 learning the competitive ropes at the senior level, Sasha Vujisic remembers a lot of the latter experiences and the potholes en route.

“I still remember it in the back of my head, but mostly I remember the bad parts,” the 16-year-old Vujisic told the NOW. “The good parts I reflect on that but then it passes through. The negatives I stick with and that’s what I use to motivate myself to keep at it.”

File away the final celebration and feed on the struggles, in other words. It proves more food for thought as Vujisic and his Rebel teammates prepare to defend the 2018 title.

A year ago, Burnaby South found itself ranked No. 1 in the province just a week into the season following a couple of strong tournament showings. It proved shortlived, however, and while they remained in the rankings for the rest of the regular season, by the time playoffs began they were considered underachievers. The biggest hit came when they suffered a tough loss in the Burnaby-New West league playoffs to crosstown rival (and AAA) Byrne Creek.

“That was just something else. I don’t think we could have went any lower than that. When we lost that game we knew, that if we didn’t figure something out, we wouldn’t hear the end of it,” said Vujisic.

It was something that resonated with everyone, remarked point guard Kyle Kirmaci.

“When we lost to Byrne (Creek), that really woke us up and made us stronger as a team,” said Kirmaci.

That downbeat was followed by a series of upbeat efforts, but eventually saw them hanging tough in the Lower Mainlands. Clutching up and benefiting from a polished practice regimen, the Rebels got on a roll to clinch the last regional berth to the B.C.s and didn’t stop until they topped Semiahmoo with a 80-72 win at the Langley Events Centre.

Although ranked No. 1 to start this season, head coach Mike Bell said just as last year everything has to be proved on the court, every game.

“Nothing’s going to be taken for granted. We know they’re going to bring their best game and we have to bring our best game forward as well," said Bell. "Early in the year it doesn’t really mean much but we want to come out and make a statement, we want people to know we’re not taking last year as a fluke, we want to keep showing we’ve built a strong program here and compete at every grade and every level."

Vujisic comes into this season not only motivated in his role as the team’s big post player, at six-foot-10, but fueled by another disappointment.

He spent the summer in Serbia as a member of that nation’s under-16 squad in preparation for the European championships, working out with the team every day. As the Serbian squad – which included five other players six-foot-seven or taller – rehearsed for the big tournament, a mistake was about to sideline their Canadian ace-in-the-hole.

Days before the tourney was to tip off, Vujisic was ruled ineligible to play for the host country due to a missed deadline.

“I was with them right up until the tournament when I found I couldn’t play because my paperwork wasn’t ready,” he said. “That was (frustrating). It was six hours of practice every day for two months, the whole summer. That’s how I spent my summer.”

But from that disappointment he has more fire for this season, as well as some honed skills and strength.

“While with the Serbian national team I worked a ton on my jump shot and on my body. That’s definitely going to be an addition that could help us out. I’ve also of course worked around the hoop and on my defence and rebounding and conditioning. My biggest addition to my arsenal is definitely a mid-range jump shot. Just to keep the defence guessing,” he added.

It means he can support his guards and also keep the defence on their toes, while also being one of the team’s two inside forces.

If it all comes together again, the disappointment Vujisic and his teammates will be handing out will be at their opponents’ expense.

They then head to Langley for the Tsumura Invitational for next week.