There’s a whole lotta fun happening at Swangard. That’s the general point of it all when the TSS Rovers play, and has been the order of the day throughout the club’s third season in the USL-2 development soccer league.
Jun 4, 2019 4:49 PM By: Dan Olson 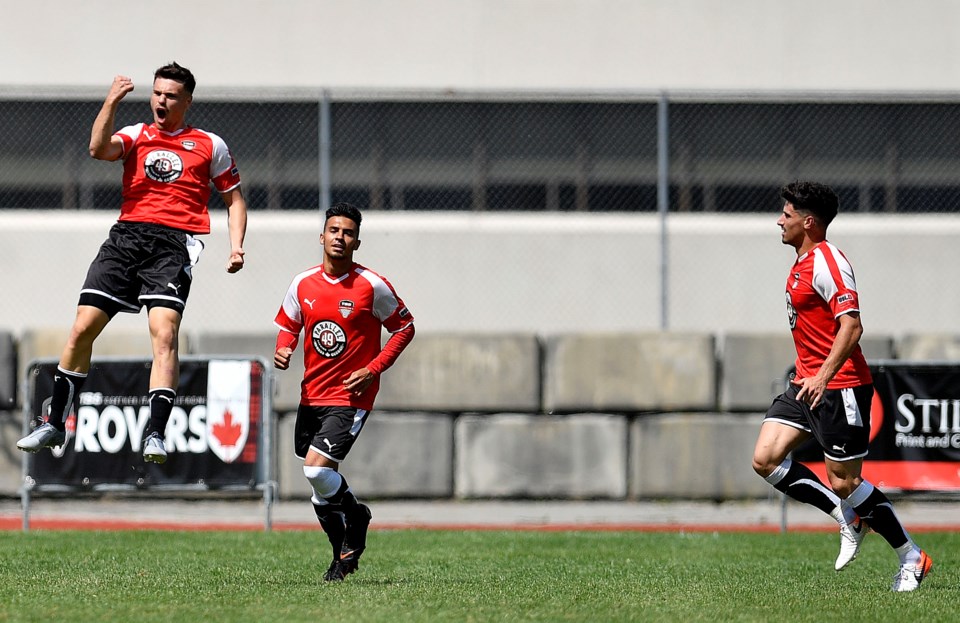 The TSS Rovers, which include SFU siblings Matteo and Marcello Polisi, shown at far left and right during a recent Rovers game, is offering free admission to those who register online. See information at the bottom of the article.Jennifer Gauthier

That’s the general point of it all when the TSS Rovers play, and has been the order of the day throughout the club’s third season in the USL-2 development soccer league.

Burnaby’s Mark Baldisimo is in his first season with the Rovers, having spent a couple of years on the men’s Fraser Valley and Vancouver Metro circuits. The play in the development league, with competition from as far away as Eugene, Ore., and Calgary, is pretty intense.

“The biggest adjustment is that there’s a lot of young players so you have to bring that energy,” the wily veteran of 23 years said. “The transition happens quickly and you’ve got to be able to match that.”

When they play their home games at Burnaby’s Swangard Stadium, energy also comes in the form of some boisterous supporters, who could give members of the vaunted Vancouver Whitecaps’ Southsiders a lesson or two.

The league has already sent a polite letter to the Rovers management on seeing if they can keep the off-pitch jubilation to a minor roar, as well as keeping the fans off the sidelines and pitch.

For the players, the small but vocal following they’ve attracted to their games has been a definite advantage, Baldisimo said.

“It’s really, really fun atmosphere. It just shows how good the fans are. When we beat Portland (under-23s) 5-0 the fans brought so much energy,” he recalled.

The problem is that win was nearly three weeks ago, and their most recent one to boot. The club has suffered a pair of one-goal setbacks, and most recently a 0-0 tie, all with Calgary Foothills.

Baldisimo, who comes from a soccer family where three play soccer at a high level, including 20-year-old brother Matthew of the Vancouver Whitecaps program, says the team is beginning to mesh after its recent struggles.

“We’ve got a real good group here from a number of good programs,” he said, referring to SFU, UBC, Trinity Western and the likes. “Our main goal is obviously to win the USL-2 league. We believe we have all the talent.

“I think we just have to take it one game at a time, and hopefully the wins will come.”

Having been groomed through local Wesburn Galaxy, as well as a stint with the Whitecaps residency program, Baldisimo is just happy to still be playing at a very competitive level.

The Rovers are offering free tickets to everyone for Friday’s 7 p.m. game against the Victoria Highlanders at Swangard Stadium. By registering online via https://go2.chimp.net/tss-rovers-2019/, fans will gain two free tickets to the game, as well as a $5 donation to their favourite charity.