No matter how their debut goes tonight in Calgary, the TSS Rovers will have chalked up a win. Getting a new franchise off the ground – a soccer club in Canada, no less – is that kind of challenge.
May 4, 2017 4:37 PM By: Dan Olson 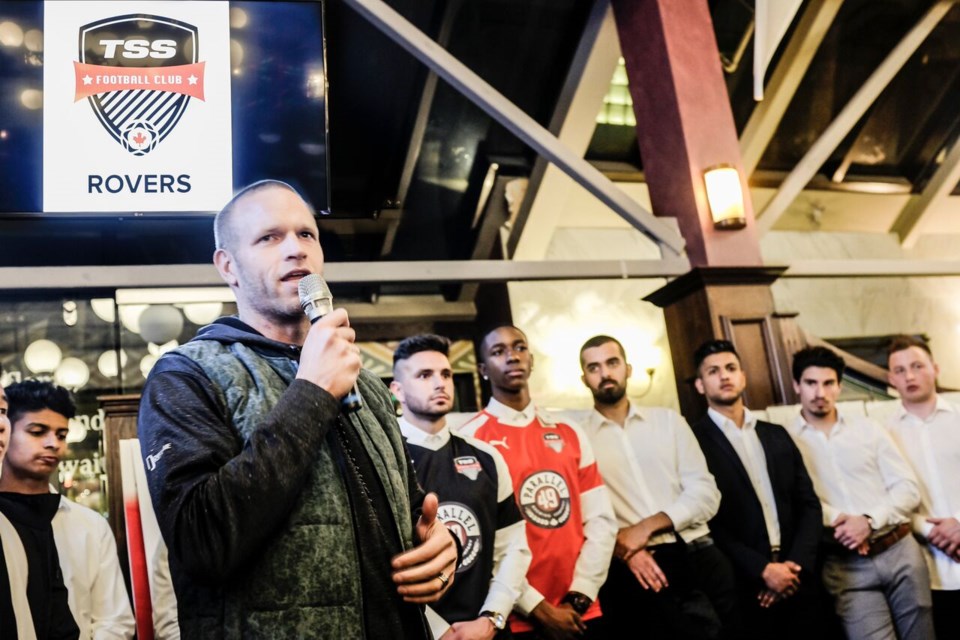 No matter how their debut goes tonight in Calgary, the TSS Rovers will have chalked up a win.
Getting a new franchise off the ground – a soccer club in Canada, no less – is that kind of challenge.
The program’s goal as a first-year squad in the United Soccer League’s Premier Development League, with Burnaby’s Swangard Stadium as its home base, is to embrace the mantra of development.
“It’s a whole new world, and we’re learning on the fly,” remarked TSS general manager and assistant coach Willie Cromack. “It’s a lot of work, but it’s what we want to do.”
The learning curve is huge – for management, players and fans – but for any hard knocks they’ve had to face, the central focus is to help Canadian talent gain a footing in the climb up the soccer ladder, he said. Colin Elmes holds the reins as head coach.
The Rovers lineup of 23 players includes a couple still in high school, four players 18-and-19 years old, and six alumni of the Whitecaps Residency program. A good number are from UBC, SFU or Trinity Western University. All live and breathe the sport.
“We’re a very young squad, but we are sticking to the idea that this is a under-23 development league… Our first and foremost goal is to develop Canadian soccer players.”
The PDL is considered the third tier of the professional circuit, with the pay virtually a per diem amount, not affecting scholarships.
The common theme of those selected is depth in experience – even the teenagers, like 17-year-old forward Jin An, a Coquitlam product who has Vancouver Metro Soccer League experience with Rino’s Tigers and played for Mountain United. He’s also gotten a taste of overseas competition, having attended training camps in Portugal.
Tak Tasaka, an 18-year-old midfielder who played with Burnaby Selects when they won the u13 B.C. title, is another of the teen talents on the roster.
There are a handful who have PDL games on their resume – including strikers
Daniel Davidson and Michael North – who will be called upon to provide valuable leadership. Davidson scored three times in 10 games with the Kitsap Pumas last year, while North, who plays for Burnaby EDC in the Vancouver Metro league, plied the pitch for the Victoria Highlanders last season.
In net, TSS has 22-year-old Chad Bush, who played for the Ottawa Fury in the NASL in 2014 and at UBC last year.
There will be a hill to climb, metaphorically, in the Western Conference’s Northwest Division, where the Rovers will take on Calgary Foothills, Eugene, Ore.-based Lane United, Portland Timbers u23s, Seattle Sounders FC u23 and Victoria Highlanders.
“For us, it’s going to be important that we put on a good experience for the fans at Swangard, make it an entertaining and fun place to watch a game,” said
Cromack.
The program came out of the Richmond-based TSS Academy, and boasts former Vancouver Whitecaps captain Jay DeMerit among its board members.
“It’s a passion project, that’s for sure,” he said. “No spouse or accountant is saying ‘Purchase a sports franchise.’ … We’re going to do our best to commit and contribute to the Canadian [soccer] landscape.”
They open the season tonight in Calgary, and return home to host Lane United, May 12, 7 p.m. at Swangard. For more info on the club, go to www.tssrovers.com.