A year ago, the Byrne Creek senior boys rugby team enjoyed an amazing renaissance. This year, they program is taking it another step.
Mar 16, 2020 12:37 PM By: Dan Olson 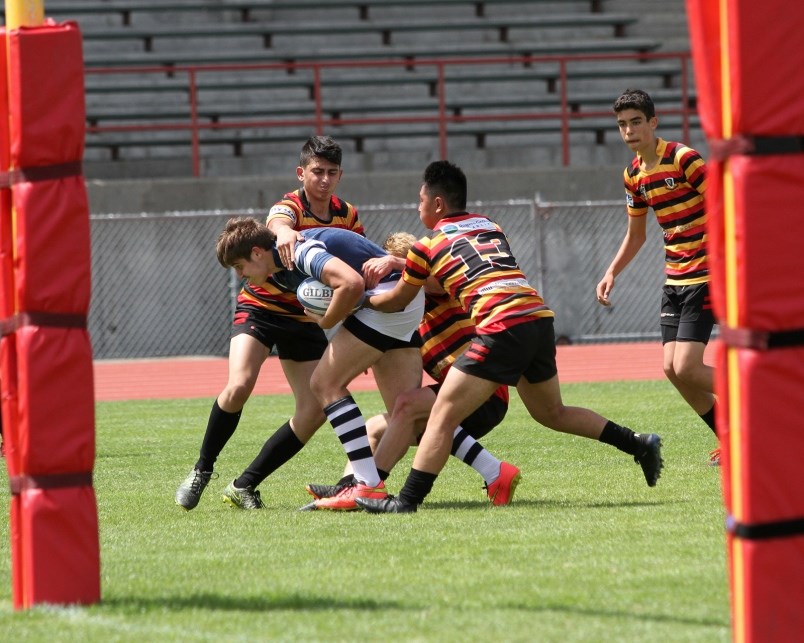 The Byrne Creek senior boys rugby team, which faced off against Charles Tupper at last year's Tier 2 provincials, has ushered in a wave of interest in the sport, including a reborn girls program.Jean Konda Witte

This year, they program is taking it another step.

Although all action – including games, practices and meetings – are paused due to the public precautions over the COVID-19 virus, the club’s coach reflected on the past weeks and progress he’s witnessed as Byrne Creek aims to build on last year’s march that ended at the provincial championships.

Coach Moreno Stefanon said the enthusiastic response this winter to the sport has spawned a deeper junior and senior squads, as well as a senior girls team.

“Mondays (were) a gong show,” said Stefanon of the practice days when both the boys and girls squads were on the field. “We had all three teams out, about 100 kids. It was controlled chaos.”

Practices began in early February, and have ramped up with more than 40 girls coming out to try the sport, along with approximately 60 boys for the senior and junior sides.

Last week, the girls team took on Windsor in an exhibition match and actually led 10-5 in the first half before the more experienced Dukes parlayed that advantage into a win. Even though Windsor were lacking numbers and it was considered a default win for the Bulldogs – the two teams played 13-aside in the first half – the game had all the earmarks of a gritty battle.

“It was just great to see so many enthusiastic faces,” noted Stefanon. “It very much looks like rugby is a good sport for girls at Byrne Creek.”

Because they’ve accepted a couple of St. Thomas More students, who have no team of their own down the street, the Byrne Creek girls program can only play exhibition matches.

The two boys squads, however, were gearing up for league action before the games were all kiboshed by the pandemic.

Stefanon noted that while the senior side lost six players to graduation – most notably Italian international student Francesco Tosato – the team continues to build with healthy numbers and interest in the sport.

“It’s really added to the athletic culture of the school,” he noted. “Byrne Creek has had a strong basketball culture, thanks to the dedication of coaches like (Bal) Dhillon. Now you’re starting to see that with these new athletic options popping up, kids are coming out to give them a try.”

He concedes that the team misses Tosato, who had played the sport for a number of years in his home country, and who acted like a coach on the field.

“His level of play was just phenomenal, and it really rubbed off on the other guys. When he talked, players would listen and absorb what he was saying.”

Two players with the junior side, Grade 10 Semir Hasic and Grade 9 Sammy Srobotnjak, are among those who have a lot of potential in the sport, Stefanon said.

“(Srobotnjak) definitely has the physical assets. He is really trying to do more than just run through people.”

The team had planned a rematch against Charles Tupper – who beat the Bulldogs in the senior boys Tier 2 provincial final last year – on April 3 at Burnaby Lake, but its expected to be cancelled.

“It’s out of our hands now, but if and when we return, I think we’ll make some noise.”