Selects stake out winner's circle with u16 provincial cup victory

With all the marbles on the line, the Burnaby District Metro Selects came ready. The under-16 boys team put it all on the pitch, edging Lakehill-Gorge 2-1 to capture the Provincial A Cup last Sunday in Surrey.
Jul 11, 2019 1:18 PM By: Dan Olson 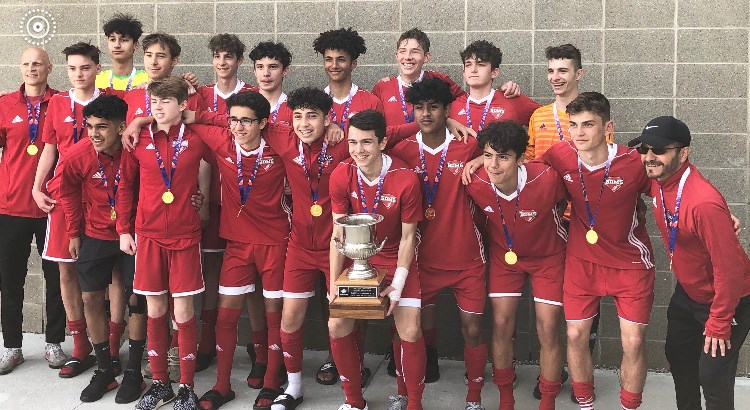 The Burnaby District Metro Selects under-16 boys team, shown celebrating their Coastal Cup win back in May, completed the cup sweep last week in Surrey with a provincial A cup win.Contributed

With all the marbles on the line, the Burnaby District Metro Selects came ready.

The under-16 boys team put it all on the pitch, edging Lakehill-Gorge 2-1 to capture the Provincial A Cup last Sunday in Surrey.

Goals by Haris Hussaini, from a free kick, and striker Joey Cannova, off a skilled individual effort, put Burnaby ahead of their Island rival 2-0 in the first half, coming before the 25th minute. Lakehill countered 10 minutes before halftime off a corner kick, then the game became a chess match over the final half.

The Selects had numerous opportunities to add some insurance, but the Island netminder was up for the challenge and stymied the Burnaby shooters. At the other end, defence limited Lakehill from getting too close, but in the final two minutes they pressed for the equalizer but were turned back by Mathew Mastromonaco. Setting the tone at all areas of the field were defenders Tyler Gunaskera and Lazar Kragulj and Cannova.

Burnaby coach Leo Cuccione noted that the strategy entering the game was fairly straightforward: limit special teams in the defensive side of the field, finish scoring chances and win individual battles.

“(We wanted to) give them no space on the field, attack as a team and defend has a team. Keep possession and move the ball around quickly,” said Cuccione in an email.

The route to the final started with a 3-0 victory over Lakehill, before Vancouver handed them a 2-0 setback.

As evident in the team’s bounce-back effort in Game 3 of pool play, where Burnaby nudged Surrey 2-1 to advance to the final, it was all the components and players coming together as one that got them to their goal.

“Winning our game against our rivals Surrey who beat us in the provincial finals last year in a shoot-out. We believe this win gave our players extra confidence to take to the finals.”

As expected, the journey to a provincial title took a full-team effort, and resulted in completing the three-step goals that the players and coaches had set out at the start of the year – to win the league, Coastal Cup and provincial titles.

“(They’re) hefty goals but we had a feeling about this team and we accomplished them all, having fun in the process and creating special moments and memories,” added Cuccione.

It proved to be a standout season, with only a blemish in the end.

Although the members of the BDMS United u13 boys soccer team may feel otherwise, the successes of the 2018/19 season will not be just of a 4-1 loss to North Vancouver in the final.

It was the second time in the provincial A cup tourney the two had met, with North Van taking the earlier game 3-0.

United, coached by Jovan Lazarevic, had opened the pool round with a 5-0 win over Kelowna United. In their third game, they blanked Fraser Valley Real to earn a ticket to the final.

Burnaby had earlier qualified for the provincial cup by capturing the Coastal Cup title.

* The Burnaby District Metro girls Fire finished fourth at their Provincial A Cup series, falling 3-1 in the bronze medal match to Fraser Valley, after the two teams opened the tourney with a 1-1 draw.