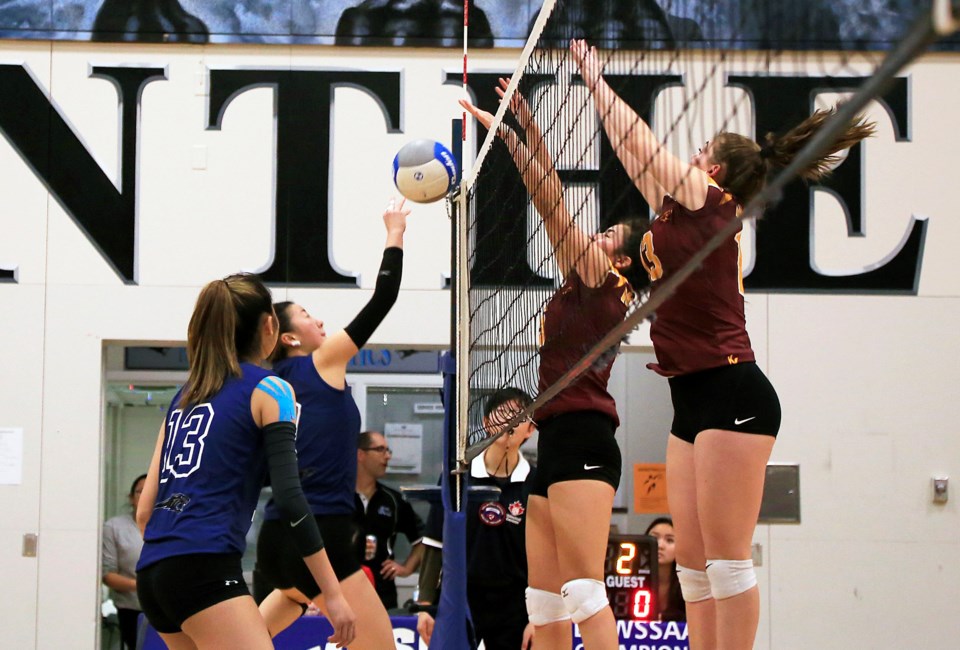 Both teams had their hearts set on playing a later game, but when push came to shove, their hearts were all-in Tuesday for a barn-burner of a bronze medal game.

The Moscrop Panthers and Burnaby South Rebels gave it a mammoth effort in the Burnaby-New West senior girls bronze medal match, taking it five sets before settling on a winner.

Still reeling from their semifinal setback a day earlier, Moscrop found just enough gas in the tank to out-last South in a grueling 3-2 victory.

After seeing the two smash it out over nearly two hours, everyone at the Burnaby Central gym would have awarded both teams a commendation for their grit and determination.

The match was settled on Christina Nieh’s spike that tipped off a Rebel defender to give the Panthers a 15-13 victory and third place in the Burnaby-New West league playoffs.

“They were on a real low coming off a loss yesterday, so this was for third place,” remarked Moscrop coach Adrian Wong. “They were really down emotionally but I’m glad they pulled through. I think the experience of just being in a lot of tight matches over the years, playing through it without folding, is a great lesson.”

The contest was for the final berth to the Fraser North zone playoffs, although South will have a wildcard opportunity, according to Wong.

After Moscrop won the opening set, Rebels replied with a 25-19 decision to tie it 1-1, fending off a solid rally by last year’s defending league champions with five of the last six points.

With their backs to the wall, the Rebels responded aggressively. They grabbing an early lead, forcing a fifth set on Francesca Alati's block at the net for a stealthy 25-21 win.

In the fifth and deciding set, the gap between the two teams was a point or two most of the way. The Rebels took the lead at 6-5 and drove ahead 13-10, but a couple of errors and strong net play by Moscrop deadlocked the two at 13-13. It came down to an error and Nieh’s  final smash down the left line to end it.

“Turning point was probably when we were up 13-10 and we kind of got stuck on one rotation and that was the turning point,” noted Burnaby South coach Myles Leong. “We just couldn’t get that side out. I ran out of time outs and it was up to the girls to fight through it. They just came up a little short.”

South was a determined underdog in the playoffs, shaking off a 3-4 league record to make the final four. After losing its semifinal to eventual league champion Burnaby Central 3-0 on Monday, the squad, led by Angela Caguioa and Athena Mok, were up for the challenge.

“Our girls regrouped quite well (after the semifinal). It was just about forgetting whatever happened before and getting to that mindset. I think they did well and fought really hard. It came down to the fifth set and its survival of the fittest at that point,” added Leong.

For Moscrop, who were coming off a 3-1 defeat to Burnaby North in the semifinal, the win was some well-deserved affirmation of a season of growth.

With only one player from last year’s provincial run, the Panthers took considerable steps to be in the picture after a 6-1 regular season. Having coached most of the team since Grade 9, Wong was pleased in how they’ve put things together.

“It’s been amazing. The start of the year it was a little shaky,” he said. “We had a tournament at UBC after the first week and they were pretty shaky. They kind of got slaughtered by most teams, and I was thinking, OK, maybe we’re a good team and not a great team. But over the season they were really committed, coming to practice and kept improving. They started to gel as a team and I’m really proud of them.”

The Fraser North playoffs begin next Tuesday at Burnaby Central.