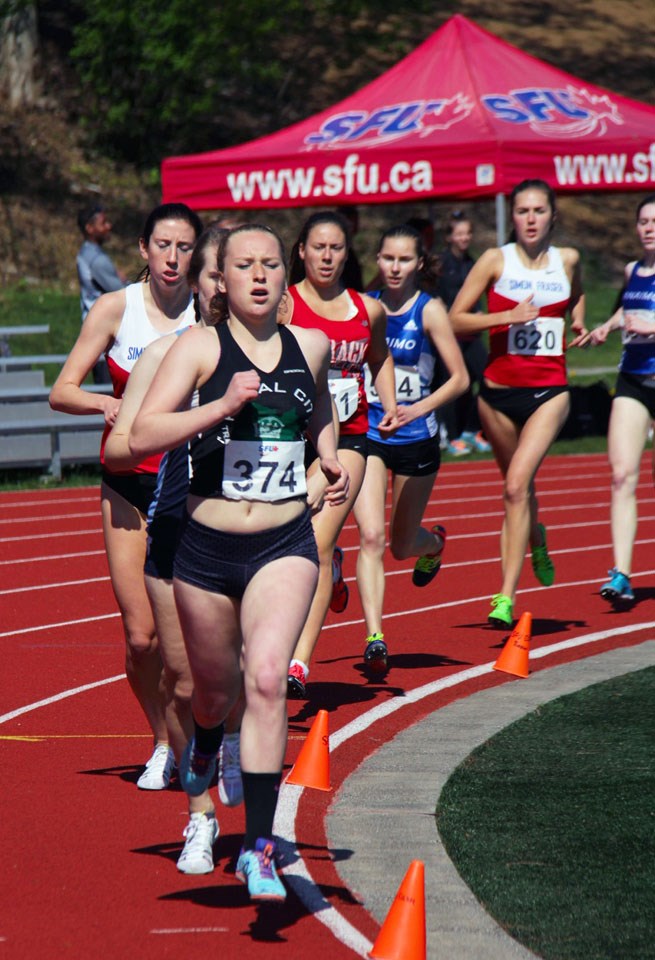 Ella Brown established a new meet record while taking her third consecutive triple jump title at the Emilie Mondor Invitational in Burnaby.
The Simon Fraser University junior registered a jump of 11.60 metres, extending her previous meet record from 11.41 set two years ago.
It was part of a strong SFU Clan track performance at the competition, with another meet mark set by middle distance runner Marc-Antoine Rouleau in the men’s 1500m race. Ranked No. 12 overall in NCAA, Rouleau finished in a time of 3:50.41, while teammate Sean Miller set a personal best of 3:58.01 en route to a third-place finish.
Also picking up gold at the meet were SFU’s Selina Byer, in the women’s javelin with a throw of 38.03, Jerry He, who posted a long jump of 6.93m, and Vladislav Tsygankov, in the men’s 100m dash with a time of 11.01. SFU also received a first-place result from the men’s 4x400m relay, which includes Josh Adheimer, Dylan Freinhofer, Daniel Kelloway and Burnaby’s Cameron Proceviat.
Picking up silver medals for SFU were Kelloway, who finished the 200m dash in 22.22 seconds, Valda Kabia, in women’s 200m with a time of 25.24, and Peter Behncke, in 15-and-under hammerthrow with a toss of 50.47m – just shy of Western Washington’s Brendan Pless’ 50.77m. The women’s 4x100 relay, which includes Natasha Friedman, Bryce West, Monique Lisak and Brown, placed second with a time of 49.05.
Claiming third-place results for SFU were Joshua Adhemar, in the 400m hurdles, Jacob Karamanian, in the 15-and-under men’s javelin, Kelloway, in the 100m, and Natasha Lazecki, in the women’s long jump.
The Royal City Track Club’s Brianna Bates captured the top distance in the 16-to-17 women’s javelin, with a throw of 33.71m, while clubmate Lauren Vanee placed second with a toss of 32.81m. Vanee would also place 10th in the 100m hurdles.
In the men’s 16-17 discus, Royal City’s Evan Smith hit a distance of 33.00m to collect silver. Teammate Jeremy Belcher came in fifth in the men’s triple jump.
Emily Chilton ran the 13th best time in the women’s 800m race, while in the 1500m women’s middle distance race, Grace Fetherstonhaugh placed 18th.
Lauryn Savela placed third in the javelin.
For the New Westminster Spartans club, Cheryl Chow secured the sixth best distance in the triple jump. She also stood 11th in the 100m hurdles. In the men’s 110m hurdles, Diego Medrano placed eighth overall.
The top result for Burnaby Striders was Nathan Mah’s fourth-place mark in the men’s 100m dash (11.20s), to go with a sixth place finish in the 200m.