SFU striker on point to start the season

Emma Pringle looks at goals like some use an old potato chip slogan – can’t stop at just one. Pringle parsed a pair of goals to lead the Simon Fraser University women’s soccer team to a 4-1 victory in their home opener on Saturday.
Sep 20, 2018 7:02 PM By: Dan Olson 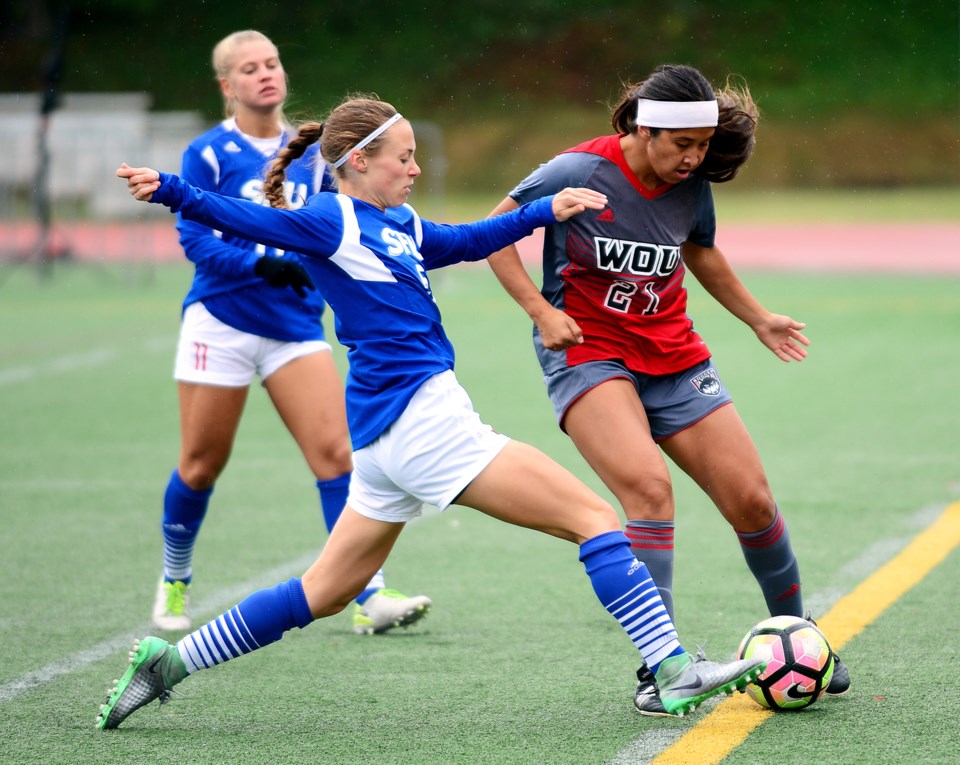 Simon Fraser University’s Christina Dickson, centre, stretches out to knock the ball away from Western Oregon’s Amber Whitmore during Saturday’s GNAC conference game at Terry Fox field. The Clan bolted out to a quick lead and held on for a 4-1 decision.Jennifer Gauthier

Emma Pringle looks at goals like some use an old potato chip slogan – can’t stop at just one.

Pringle parsed a pair of goals to lead the Simon Fraser University women’s soccer team to a 4-1 victory in their home opener on Saturday.

Pringle, a junior from North Vancouver, had set a high bar as a striker last year when she deposited 14 markers in 15 games, ranking her 18th amongst all NCAA women scorers.

The new season has seen the five-foot-eight forward continue that pace with five goals in the team’s first five games.

In their first conference test against Western Oregon on Saturday, teammate Jenna-lee Baxter got the offence going seven minutes into the contest, spinning two defenders around before lashing a hard shot to the top right corner.

Baxter later delivered a perfect cross to Pringle, who headed it into the net for a 2-0 lead at the 31-minute mark.

In the second half, the Clan countered the Wolves’ lone goal with another nifty shot from Pringle, this time from the top of the box that went in off the crossbar. Freshman Teagan MacKay would add a goal later in the contest, to go with an earlier assist. Finishing with two helpers each were Emma Lobo and Baxter.

The Clan, at 3-2-1 overall, had nine shots on goal, while limiting Western Oregon to just four.

“I’m proud of the way we came out and the speed at which we played. We scored some really great goals and executed our game plan very well,” said SFU head coach Annie Hamel.

The No. 3-ranked SFU men’s soccer team is building a strong case for a higher spot in the NCAA Div. 2 polls, after racking up a sixth straight victory, this time 6-0 over the Oklahoma Baptist University Bison.

A late surge showed the kind of spark necessary to challenge in the Great Northwest Athletic Conference, but it will take a better start if the Simon Fraser University Clan hope to add to its season-opening win.

The Clan fell to 1-2 on the football season following a 52-28 pick-axing from the South Dakota School of Mines and Technology on Saturday.

Trailing 42-0 midway through the third quarter, the visiting SFU squad got on the board when starting quarterback Miles Richardson hit Rysen John on a 17-yard pass late in the frame to cap an 85-yard drive.

The Clan would surrender two more majors to the Hardrockers before responding, this time with Justin Seiber coming in off the bench for three TD passes.

The freshman QB hit John on a five-yard throw, then found Liviano Canil from 17 yards out. He capped the final quarter with a 12-yard strike to Christian Philips, all in under four minutes.

South Dakota racked up 486 yards of total offence, while SFU was not far behind with 416.

In their first run of the season, the SFU men’s cross country team left the opposition in their dust, topping the San Diego Invitational last week.

On the women’s side, German exchange student Sophia Kaiser placed third while captain Addy Townsend came in fifth spot, to power SFU to a second-place result.