Those inaugural first days in a new classroom and on a new team can be awkward. Freshman Emma Pringle is having none of that.
Sep 14, 2016 2:30 PM By: Burnaby Now 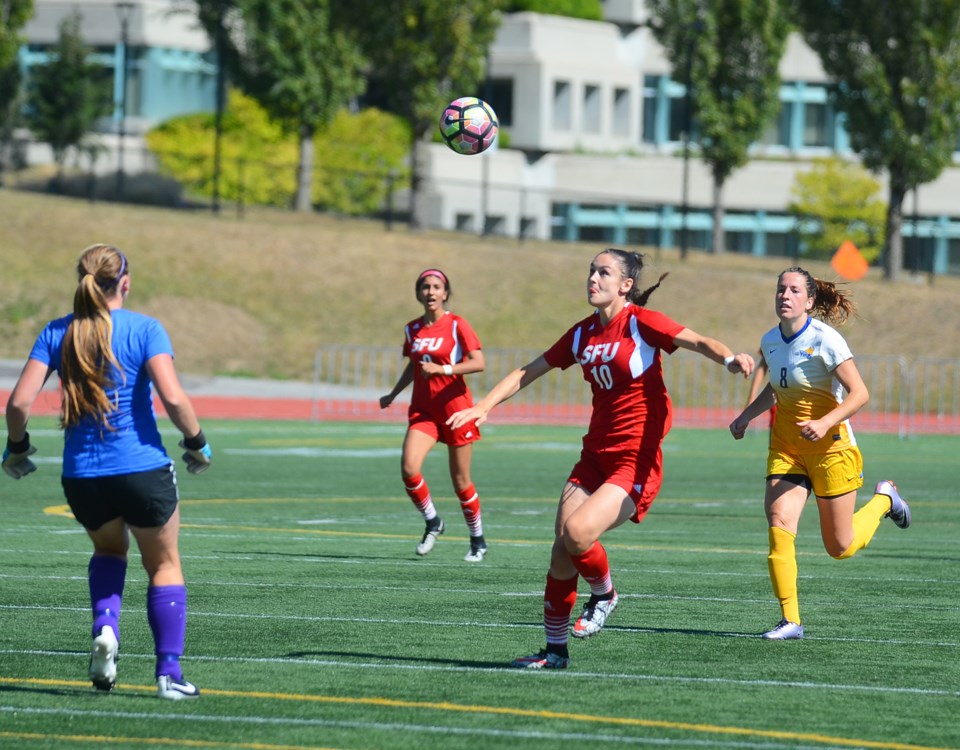 Simon Fraser University’s Emma Pringle, shown chasing down a ball during a recent women’s soccer exhibition game, has gotten off to a quick start at the university level, scoring three times over her first three games.Cornelia Naylor

Those inaugural first days in a new classroom and on a new team can be awkward.
Freshman Emma Pringle is having none of that.
The North Vancouver-raised forward is making a smooth transition as part of the Simon Fraser University women’s soccer program, having scored all three of the team’s goals to start the season 2-0-1.
In their most recent contest, Pringle dipped into her bag of offensive tricks and delivered the game-winning strike in extra time in a 1-0 victory over Cal State Dominguez Hills in California.
Pringle’s header, off a free-kick executed masterfully by midfielder Jenna Baxter, came just 2:54 into the extra frame.
“Emma is a fantastic player and person, and I am not surprised by how well she is doing,” remarked head coach Annie Hamel. “She understands what she brings to the team, and her teammates do as well. We are just feeding her game.”
In regulation time, the two teams were locked in a defensive showdown, although the visiting Clan held a 10-6 edge in shots through 90 minutes.
Burnaby’s Allyson Dickson was part of a four-strong backline that kept the Cal State rival in check most of the way, while goalkeeper Priya Sandhu picked up the shutout.
Earlier, Sandhu was perfect in a scoreless draw against Cal State LA, while Burnaby’s Teagan McManus registered one of the team’s seven shots.
SFU launched its NCAA California trip with a successful 2-0 triumph over the Academy of Arts.
Pringle scored both goals as the freshman single-handedly staked out an offensive spot, firing eight of the club’s 15 shots in the first half. Drawing assists were sisters Christina and Allyson Dickson.
SFU continued its trip on Tuesday in Irvine, Cal., and returns home to host Western Washington on Sept. 24.

Thatcher Demko 'desperately' hopes the Canucks bring back Ian Clark
May 19, 2021 11:50 AM
Comments