They’ll be minus one of their better wrestlers, but the Simon Fraser University women’s team heads to the 2019 Women’s Collegiate Wrestling Association still as one of the squads to beat.
Feb 5, 2019 4:31 PM By: Dan Olson 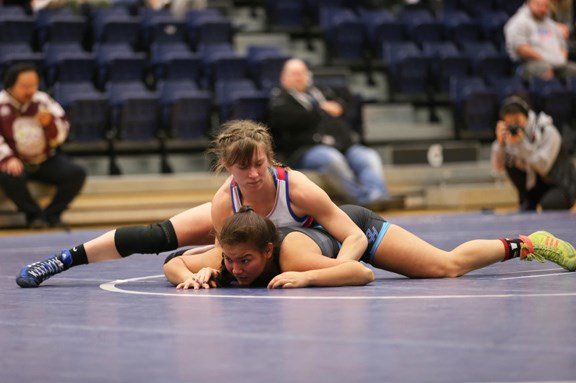 Simon Fraser University's Dominque Parrish, shown above, is looking to repeat as WCWA national champion this weekend in Georgia, leading the program's charge for a second title.Paul Yates/SFU Athletics

They’ll be minus one of their better wrestlers, but the Simon Fraser University women’s team heads to the 2019 Women’s Collegiate Wrestling Association still as one of the squads to beat.

Burnaby’s Nicole Depa would have been one of the favourites in her 136-pound division, but a troublesome knee ailment that dogged her all season was officially diagnosed as an ACL injury recently, putting the No. 1-ranked grappler on the sidelines. It’s a significant hit but head coach Justin Abdou believes the team will still be in the mix.

“We’re certainly in the hunt and enter (the nationals) ranked No. 4,” said Abdou. “It’s a pretty intense competition and we haven’t had the opportunity to wrestle with our top group much due to injuries and national team commitments.

“This will be a good chance to see what we can do.”

The Marietta, Georgia-hosted nationals has an international flare, said SFU’s coach, that really spotlights the best women’s wrestling league in the world.

In last year’s championship, SFU finished second, one result shy in their attempt at claiming a second national WCWA title.

As a senior, Depa was projected to be the one to beat this year. However, the Canadian national silver medallist’s knee kept her sidelined and she managed to wrestle just once.

“She only had one competition for us this year, which she won,” noted the coach of the St. Thomas More alumna. “But even then it didn’t feel right. As it turns out, being out this long may turn into an opportunity as we’ll get a medical hardship waiver and she can come back next year.”

The team’s other No. 1-ranked grappler, Dominque Parrish, will lead a pretty strong group into battle.

"Parrish has missed some time lately with national team commitments and a minor injury or two, but having her back in the lineup may just be that spark that we need," said Abdou. "She is a great leader and tends to make those around her better.”

The senior from Scotts Valley, Cal., will be looking at defending her WCWA title in the 123-pound division and build on a season that saw nearly every match a win by fall or technical fall.

Expected to be seeded fourth in her 155-pound class after capturing gold at the Dave Schultz International last month is sophomore Alyvia Fiske.

Also making the trip is Burnaby Central aluma Sara Brinkac, competing in the 143-pound class. The freshman is one of three first-year contenders for SFU, including Jenna Garcia and Serena Woldring. The Notre Dame Regional Secondary grad has yet to lose to a WCWA opponent this year.

“Being a freshman puts them in an interesting situation,” said Abdou. “Sara’s done well this year but has had some recent injuries. Now she’s fresh and excited to be there, so sometimes you get your best results in that situation.”

Port Moody’s Ciara McRae, in 109 pounds, Mission’s Alexia Seal, in 101 pounds, and Laura Mason, in 116 pounds, are part of a strong sophomore crew who enter new territory with their first foray at the nationals.

Meanwhile, Alex Hedrick aims to repeat as a finalist – where last year her winning streak came to a halt when she crossed paths with Parrish.