Health and happiness go together like pancakes and syrup. The defending B.C. champion Burnaby South Rebels ate a lot of dry hotcakes to start the season, but this week it was nearly all sweetness.
Jan 31, 2019 10:38 AM By: Dan Olson 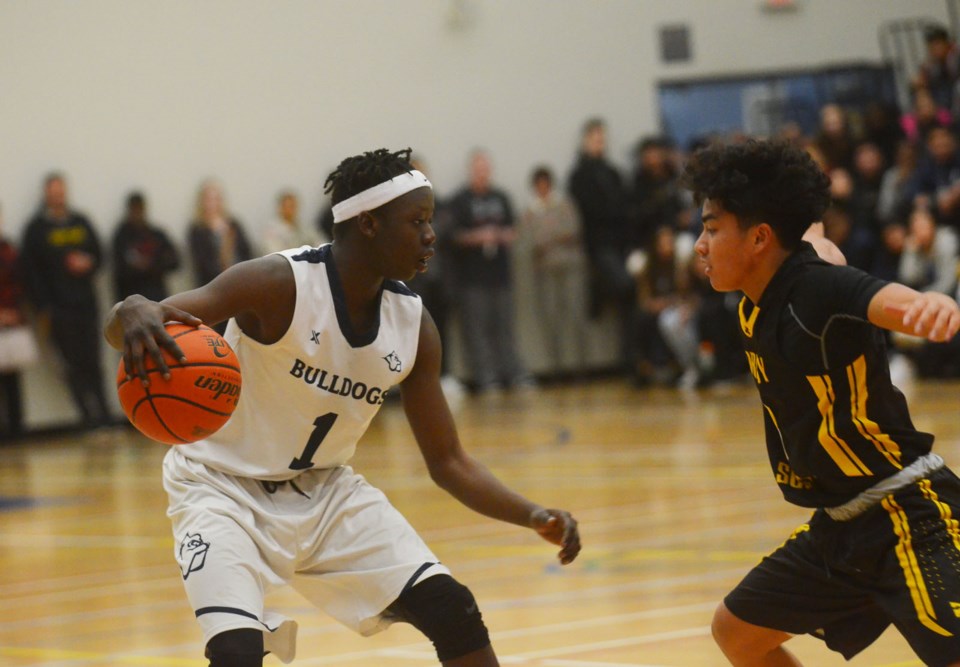 Byrne Creek's Bithow Wan, at left, and Burnaby South's Kyle Kirmaci, shown during their game last year, renewed their teams rivalry this week in a battle for first place. The Rebels emerged with the win and home court advantage in the league playoffs, which start next week.Cornelia Naylor

Health and happiness go together like pancakes and syrup.

The defending B.C. champion Burnaby South Rebels ate a lot of dry hotcakes to start the season, but this week it was nearly all sweetness.

The Rebels secured the chance to host the Burnaby-New West senior boys basketball league playoffs by knocking off archrival Byrne Creek 84-54 on Monday, spurred on by a full lineup of healthy players.

It lasted for less than a half, but as has been the case during the team’s 18-3 record, it was enough to carry them on to victory.

“Our big strategy was just to play the way we wanted, not get bogged down by the intensity and game play of Byrne Creek,” remarked Rebels coach Mike Bell. “It was a little bit shaky at the start. The crowd was loud and there was some anxious energy for the first bit, but we played to our side of the crowd and got on track.”

In fact, Byrne Creek held an 18-17 edge after 10 minutes, but Burnaby South lassoed the lead, then took off. However, they lost star post Sasha Vujisic, who had just fully returned to the lineup 14 days ago after missing the first six weeks to a leg injury, with a cut lip that required stitches.

Although he missed the rest of the game, the six-foot-10 Vujisic is “100 per cent ready” to play their next game, Bell said. In his absence, everyone did their bit to step up, with returning players fuelled by the memory of last year’s league final loss to the same Bulldogs.

“That was a big letdown, but it was  also something that sparked us,” Bell said of last year’s loss, which proved to be one of the motivational pieces that steered them to the B.C. 4-A title. “Our kids understand what we need to do and how to do it.”

By going on a 31-8 roll in the second frame, the Rebels put their fingerprints on every aspect of the game, en route to locking up first place. Guard Baltaj Sohal led the way in the crucial second-quarter turnaround, scoring eight points and adding three assists.

“Once we got the ball working for us they had to try to double-down, and our depth just took over. ... I think (Sohal) played great, he just stepped up in that atmosphere. (Vujisic) used his size, and him and Aidan (Wilson) were able to eat it up along the boards,” said Bell.

Byrne Creek, ranked ninth in 3-A, was without one of their key forwards but did get the usual strong performance from Grade 12 guard Bithow Wan, who accounted for 12 points over three quarters. Mukhtar Afadish chipped in 11 points and three rebounds during the first 30 minutes.

It was the second straight 30-point league win for Burnaby South, who knocked off its North rival 82-52 last week.

The No. 6-ranked Rebels continued their roll by defeating No. 5-ranked St. George’s on Tuesday, 77-69.

Tied 20-20 after one quarter, the visiting Rebels gained some traction in the second frame and then gathered momentum in the second half, breaking open a three-point contest.

Jiordano Khan set the tone with 20 points and seven rebounds, while Vujisic knocked down 16 points and 22 boards. Chipping in with eight timely points was Kyle Kirmaci.

The impact of the past string of games, including Tuesday’s win over the Saints, catapulted South up to No. 3 in the 4-A rankings released on Wednesday by varsityletters.ca’s Howard Tsumura.

League playoffs begin on Monday at New West, when the Hyacks play the sixth place finisher, and teams 4 and 5 meet in the other preliminary game. Alpha, Burnaby North and Cariboo Hill were still jostling for the final three seeding positions at press deadline.