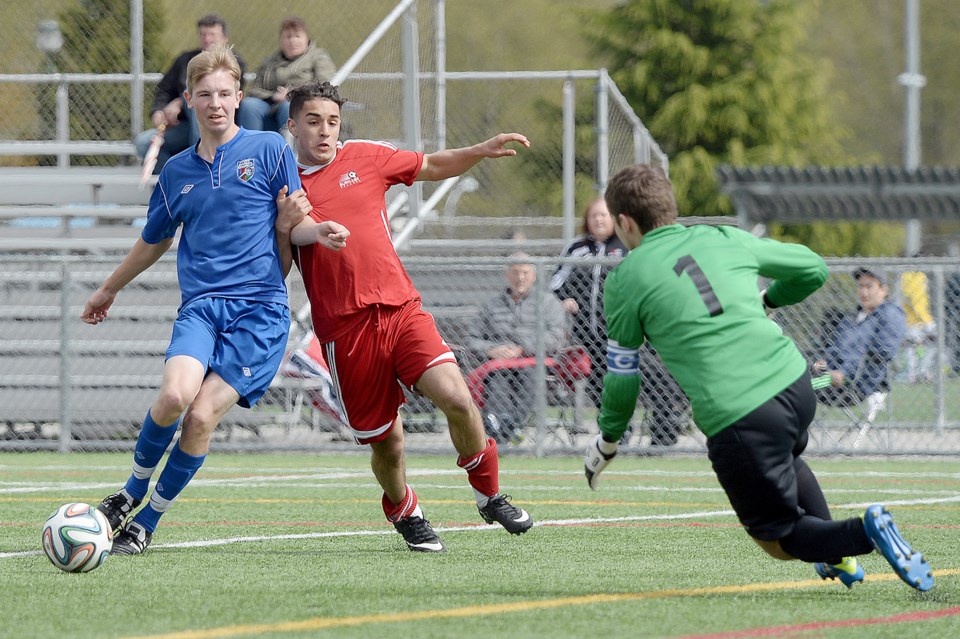 The Burnaby Selects under-18 boys' soccer team, seen in red against Delta in earlier league play, won a silver medal at the B.C. Soccer Provincial A Cup championships in Surrey on SundayJennifer Gauthier

The Burnaby Selects showed their prowess at the B.C. Soccer Provincial A Cup championships.

Select teams made it through to four age-group finals, coming away with two provincial titles.

The Burnaby under-16 boys won a fourth consecutive B.C. cup, nipping Richmond United 3-2 in the championship game in South Surrey on Sunday.

The first year u-18 Select girls also came away as provincial champions following a 3-1 victory over the Upper Island Storm.

The u-14 and u-18 Burnaby Selects both took home silver medals with tough one-goal losses in their respective boys’ A Cup finals.

In the u-16 final, game MVP Mario Greco scored a pair of goals, including the game winner, against Richmond.

Anthony Prpic got Burnaby’s opening goal early in the contest off a corner kick header.

Burnaby advanced through a tough group, with a one win and a pair of draws, including an earlier 1-1 tie with Richmond.

“It was a difficult tournament but we outplayed and outchanced our opposition in every game, including the finals,” said head coach Franco Iuele. “The team showed tremendous skill and character, and all 16 players played a vital role.”

Anjali Dhaliwal scored two second-half goals to pace the u-18 girls to the gold medal.

Dhaliwal scored the game-winning goal off a flick-on from Nicole Bell in the 68th minute.

A minute later, Dhaliwal finished off a movement created by midfielders Danielle Pietramala and Danijela Gordic with her second of the game.

Giulia Repole tied the game 1-1 just before half time on a penalty kick.

Burnaby keeper Alysia Mustard made a diving save off a penalty kick late in the game to preserve the two-goal advantage.

Team captain Anamaria Lukic also had a solid game on the back line.

Mustard made numerous key saves in the Selects’ opening 2-1 win over North Shore.

The Selects, who missed out on a shot at a Coastal Cup title earlier this season, lost to Upper Island 1-0 in group play.

“They’ve worked hard all year,” said coach Ned Forcan on the core team who have been together for the past four years.

“Every year, they’ve gotten a little better and a little closer, and it paid off.

“That’s the biggest thing for me, to watch them grow as individuals, it’s bigger than the game of soccer.”

The u-18 Burnaby Select boys were unlucky to fall 1-0 in a shootout to Richmond.

Burnaby had a goal called back in the 40th minute and, with four minutes left in the second overtime, saw a potential game-winning free kick rattle off the post.

Richmond eventually won the gold on penalty kicks with its ninth and deciding shooter.

“All in all, the boys deserved the win,” said Burnaby head coach Joe Pinto. “But they just could not finish the overwhelming chances that were given to them.”

Burnaby placed second in the preliminary round, including 2-1 wins over Bays United/Peninsula FC and Kamloops Blaze.

The u-14 Burnaby Selects also placed second following a 4-3 loss against the Port Moody Selects in their A cup final.

Burnaby opened group play with a 5-2 win over Saanich Fusion and a 5-0 victory over Kamloops, before playing to a scoreless draw with Port Moody.

In the final, the u-14s led 2-0 after 20 minutes before Port Moody tied it at the half. Port Moody kept its momentum going into the second half, quickly going up 4-2 before Burnaby responded to make it 4-3 with 5 minutes left.

"I thought we played a great game, we just turned off for 10 minutes and let them back in it," said team captain Ryan Roberts.

Richard Culleton led the Burnaby teens with five goals in the provincial tournament. Ethan Westbury was the team MVP, while Darius Manghi was the most improved player.