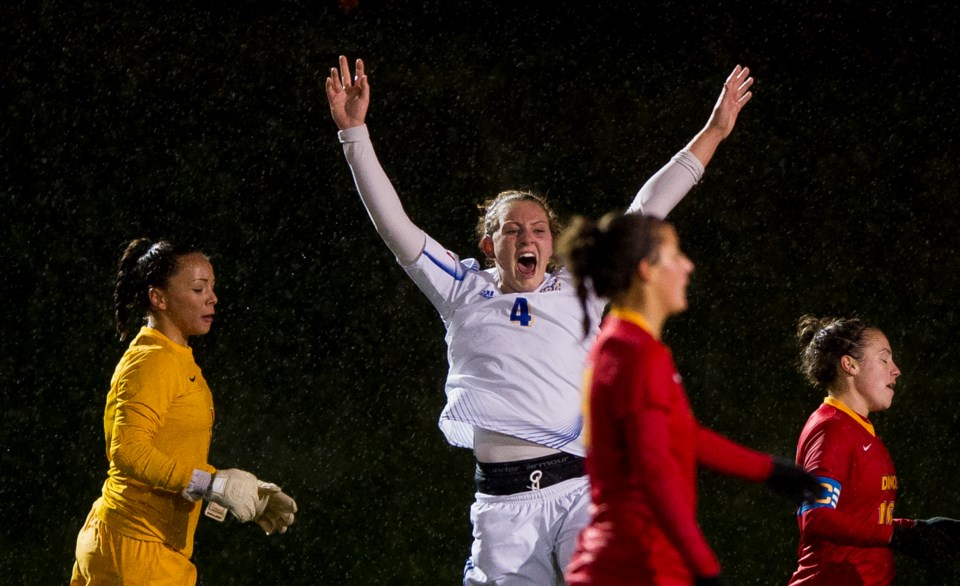 The expression on her face says it all.
In a photo snapped virtually at the final whistle last Thursday, Burnaby’s Kym van Duynhoven shouted in celebration of a rare goal that guaranteed her team another game at the Canadian Interuniversity Sports women’s soccer championships.
It wouldn’t be the last time the 5-foot-8 midfielder would celebrate last weekend.
She was a key contributor in the University of B.C. Thunderbirds’ championship march, concluding Sunday with a polished 3-0 triumph over archrival Trinity Western University in Vancouver that delivered the Gladys Bean Memorial Trophy.
Capping her university playing career, van Duynhoven embraced the completeness of the past week, where the host Thunderbirds reigned despite a lot of obstacles.
“We were extremely excited going in (to the final), especially going up against Trinity Western,” said van Duynhoven. “We played them three times this year, so we had a good idea of what to expect.”
The route to the final saw UBC edge Calgary 1-0 and Sherbrooke 2-0, with some drama along the way.
Admittedly not a big finisher, van Duynhoven said her game-winning goal against Calgary in the opener, was a tremendous moment that hinted at greater things.
“It was incredible because I don’t score many goals,” she remarked. “I wasn’t expecting to get that chance but I had worked on my headers in practice and (Tylor Shannik) put up a perfect kick. I was just glad to get it to go (in).”
Van Duynhoven’s tally came in the 90th minute against a feisty Calgary opponent – keeping the winner on track for a medal. The T-birds would follow that up by blanking Sherbrooke in the semifinal before staking out the pitch against Trinity. It was just her second goal of the season, but fewer were as important.
The Burnaby Central grad said the Canadian title makes amends for much of the adversity she and the team have faced over the past four seasons. The program hadn’t won a national title since 2006, and faced turbulence and a couple of coaching changes in recent years.
A new head coach in Marisa Kovacs and an automatic berth as hosts of the 2015 CIS championships set high expectations as the season began. Van Duynhoven said everyone was focused on the same goal from the beginning.
“We always talked about (getting to the final) as the goal for us; it wasn’t enough just to be hosts,” she said. “We wanted to win it.”
Her personal route has seen her overcome injury and disappointment to reach this point.
As a sophomore she suffered a knee injury but played through it and had surgery at the end of the season. Through the hard work and knowledgeable support of the training staff, she overcame various knocks to stay on the field.
“It’s been a real journey,” she said of her four years as a UBC midfielder. “There have been ups and downs but I couldn’t ask for a better way to end my career.”
It’s influenced her direction in the future, as well. She is studying kinesiology with an eye on a career in physiotherapy.
Van Duynhoven was also voted to the tournament all-star team, joining teammates Olivia de Goede, Krista Whittaker and Shannik.
“I wasn’t expecting it at all. I can’t think of a better way to end my soccer here.”