The Burnaby District Metro under-13 United found that the route to Richmond was paved in gold – provincial gold, that is.
Jul 12, 2018 5:19 PM By: Dan Olson 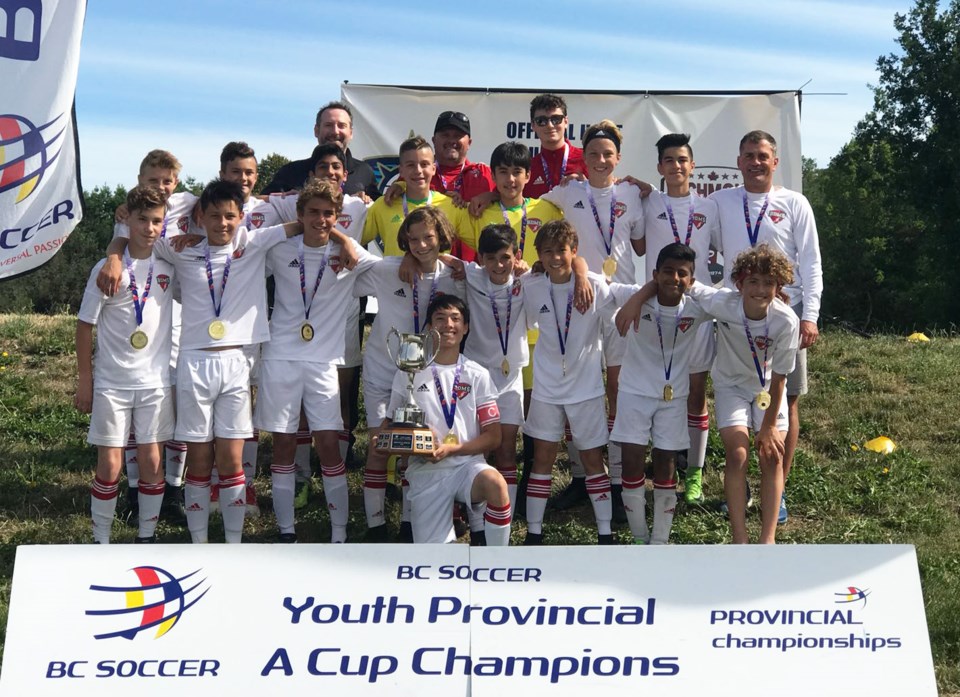 The Burnaby District under-13 boys United captured the provincial crown with a 2-1 extra-time win over North Vancouver last week.Contributed

The Burnaby District Metro under-13 United found that the route to Richmond was paved in gold – provincial gold, that is.

With a committed roster of 16 kids eager to complete the season cup sweep, United shook off a slow start and rallied to edge North Vancouver Selects 2-1 in extra time on Sunday to claim the provincial A Cup crown.

In a whirlwind weekend of games – along with the usual traffic circus of daily trips to Richmond – nothing could compare with seeing the players celebrate that final out, head coach Matt Manfredi said.

“When the final whistle blew, I couldn’t have been more happy for the players,” said Manfredi. “They deserved the win after (such) a strong finish – I’m very proud of every player. Every game (there) was a different player stepping up to be the spark and star of the game.”

Up against the Selects, Burnaby had familiarity and history on their side. The two teams faced off in the Coastal Cup semifinal nine weeks ago, with the locals prevailing 3-0 en route to that cup title.

That result added some fuel to North Shore’s fire for the provincial final, where they dominated in the first half. United trailed after just 15 minutes and spent nearly 60 minutes pushing for the equalizer.

An adjustment in the second half, by moving centre back and captain Asher Herbert up into the attack, generated the expected result with just under 15 minutes left in regulation time.

Herbert drove a corner kick into the box where Nicholas MacKinnon got his head onto it to tie the game.

In extra time, Burnaby grabbed the lead in the second minute of the second 10-minute period when Cesar Sherefani beat a defender and drilled a hard shot to the top corner, which would stand up as the winning goal.

“It was just an unbelievable shot,” said Manfredi. “I was talking with (North Van) coaches afterwards and they said they had seen enough of us.”

Burnaby advanced to the final on the basis of a 2-0 victory over Surrey – the same team they bested in the Coastal Cup final – on goals from Herbert and MacKinnon.

“We took that same energy (from the Coastal Cup) and brought it to the provincials,” said Manfredi. “It was a long tough battle as every team in our division were very good.”

United began its march against Kelowna, but surprisingly fell behind 2-0 before the game was 20 minutes old. But they regained their composure and counted four unanswered goals, two each by Varun Kothary and Sherefani.

The start repeated itself against North Van, with a 2-0 deficit this time by the 12 minute mark. Before the half Jaden Edwards got Burnaby on the board, while Laughlin Moore delivered the tying goal in a game that ended 2-2.