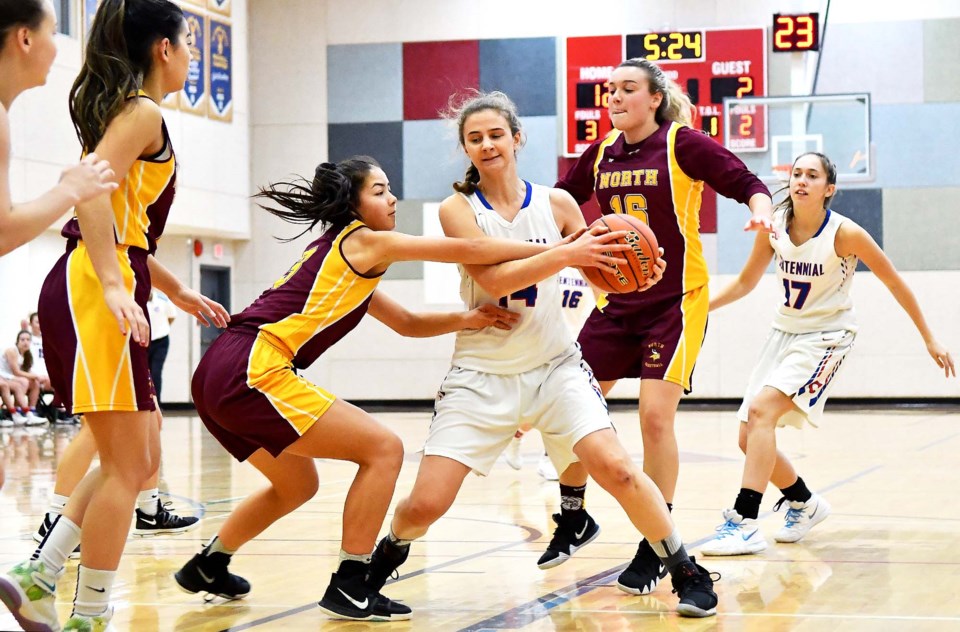 The Burnaby North Vikings' Mika Kurahashi, second from left, and Italia Paris, right, surround a Centennial ball carrier during tournament action last month. The team is taking aim at a good run in the league playoffs, which kick off in early February.Jennifer Gauthier

The aim this season was to garner experience more than reach for the moon.

And while the future is where the bigger goals are – at least on paper – this year’s edition of the Burnaby North Vikings senior girls basketball team is doing its best to tie the two together.

With the Burnaby-New West league reduced by one, due to the one-year hiatus taken by perennial league power New Westminster, an opening has arisen that could unlock a door of opportunity.

Burnaby North coach Jennifer Oatway isn’t looking past this week’s game, but she does see a lot of hope for her 15-player strong squad.

“Our playoffs are going to be really interesting,” said Oatway. “Seeding is going to be so important, and it’s exciting to be in the position we’re in right now.”

At 4-1, the Vikings sit alone in first place – but with a huge caveat. The Burnaby South Rebels, whom North hosted on Wednesday (past the NOW’s deadline), stood undefeated with two games in hand. Just one game back are the Burnaby Central Wildcats at 3-1.

The regular season wraps up Monday when the Rebels host winless Byrne Creek, and the Wildcats visit 2-2 Moscrop.

Based on recent doings, the Vikings continue to make strides as a group that entered the season with a distinct division of assets.

The squad has a pair of league wins sandwiching a solid three-game march in a local tournament to bolster their confidence, as well as bridge the gap between expectations and actual results.

With five seniors and eight Grade 11s on their roster, the team has been forged over seven weeks of various challenges.

At last week’s Britannia Bruins Invitational, they got a taste of solid competition in the form of a pair of Island teams and Delta.

They fell 49-25 to Mark Isfeld, bounced back to top Alberni District 55-42, then were edged by Delta 62-54 in the fourth-place game. The latter two games were strong efforts that went different directions, Oatway said.

“The win (over Alberni) was definitely our best game, but the Delta game we had a very good first half but just couldn’t sustain it,” she noted.

Burnaby North took a day off and then bested Moscrop 75-37 on Monday, getting a career-high 24 points from second-year forward Sammy Gee.

Of course, while the playoff picture may not be complete until Monday night, a lot has been learned in the past month.

Burnaby South has held the hammer in its three league tests, with the closest margin an 18-point victory over Burnaby Mountain five weeks ago. The Rebels also hosted their own tournament last week, padding their experience ledger by beating Tamanawis 55-37, with Awek Deng carting off the Player of the Game award, with 15 points and eight steals over three quarters, and stopping Palmer 50-29, with Tina Lui taking the game prize with a 12-point performance.

Their lone loss was to eventual tourney champion Killarney, a 64-48 setback.

The Vikings’ lone league loss came a week into the season, Dec. 10 in a 56-51 setback to Burnaby Central.

The Wildcats’ only loss was a few weeks later in a 76-47 declawing at the hands of the Rebels.

Burnaby Central picked up its third win of the season last week in a 63-33 win over Byrne Creek. Jenna Picillo tallied 20 points and Jalynne Huynh 17 in the win. Byrne’s Evet Guinoo cashed in a game-high 21 points.

With their top-six position, and thus a league playoff berth assured, Burnaby North and rivals will all be sizing up their chances for one of a few Lower Mainland spots.

Strength in numbers, as well as a vital mix of newcomers and returnees, is a bonus in the Vikings ledger.

Still in Grade 11, Gee is part of the present and future, which includes Grade 9 Shannon Wu and Grade 10 Megan Perks.

As a 14-year-old playing against predominantly 17 year olds, Wu has made the transition and shown she can handle the heat, said the coach.

“(Wu) has gotten use to the physical difference of the senior game. She just loves basketball and she needed to be challenged. Her skillset and ability has proven that it was the right decision.

Perks, meanwhile made the same jump a year ago and is taking it another step as a returnee.

“(Perks) has evolved and found a spot at the post for us. She’s gained so much confidence in having been here a year.”

Didak has been one of the team’s more consistent shooters.

“She’s our shooting guard and she’s really elevated her game as a senior,” said Oatway.

“Her leadership on the court has really set the tone for the season. She plays the way you want your Grade 12s to play,” said the coach.

In the whole scheme of things, this year's yet-to-be-determined spoils will be gravy. The future is brighter for it, said Oatway.

"Our goal at this stage to compete and challenge in (league) playoffs," she noted. "The Lower Mainlands would be a great experience."