The gift is in the wrapping, an old saying goes. Well, for the Burnaby North Vikings, the reward wasn’t necessarily on the scoreboard, but it was every present as the senior girls co-hosted the annual Wildcats-Vikings Showdown last week.
Dec 24, 2019 12:15 PM By: Dan Olson 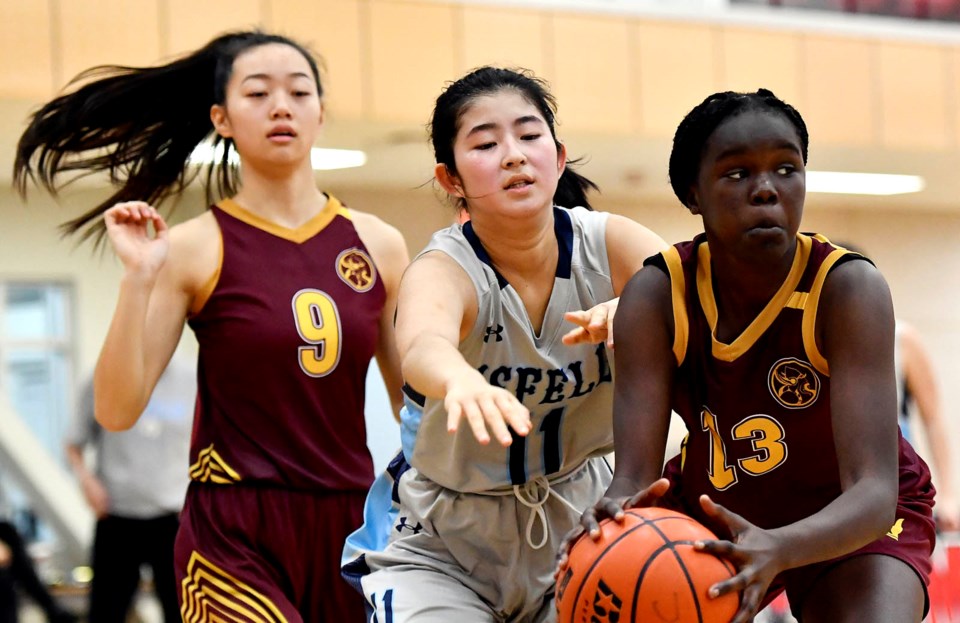 Burnaby North's Nagilu Oching plays keep away from a Mark Isfeld defender, while teammate Shannon Wu (at left) approaches earlier in the month at the St. Thomas More tourney. The Vikings would play co-host to the Wildcats-Vikings senior girls Showdown last week, putting up a pair of wins on the final day to enter the break on a great note.Jennifer Gauthier

The gift is in the wrapping, an old saying goes.

Well, for the Burnaby North Vikings, the reward wasn’t necessarily on the scoreboard, but it was every present as the senior girls co-hosted the annual Wildcats-Vikings Showdown last week.

While the Britannia Bruins ended up as the on-court champions – knocking off the St. Thomas More Knights in the final – Burnaby North came away feeling good after racking up a pair of wins to enter 2020 on a roll.

“It was a good way to finish (the calendar year),” noted Vikings coach Jennifer Oatway. “It was nice to see everyone contribute, we had good energy right through the last game.”

Admittedly, the first two contests didn’t end the way the team had hoped, with Seycove coming out ahead 58-23 in the opener, and Earl Marriott surging to a 62-40 decision in Game 2.

But considering North Van-based Seycove is ranked ninth in 2-A and both teams were very good at nurturing a lead, the losses didn’t effect the Vikings’ confidence.

“(Seycove) is very polished at this stage, and play a strong game,” noted Oatway. “Both games were reasonably close at the half but we were unable to keep pace in the second half.”

Taylor Tucci counted a team-high 12 points in the loss to Seycove, while Janelle Yang netted 14 against Marriott.

In their third game, Burnaby North topped Moscrop – which was a late addition to the tourney after Burnaby Mountain pulled out – by a 61-34 margin. Shannon Wu scored 18 points to lead the offence.

To claim 13th overall, the Vikings followed up that victory by stopping Fraser Heights 77-41, with the offence starting to show what it’s capable of. Sophia Condilenios would rally 24 points for Burnaby North, while Sammy Gee chipped in 17 points.

Yang, one of the team’s youngest players, continues to impress her teammates and coach with the way she’s made the adjustment from the bantam level.

“She’s really come into our own as our starting point guard,” remarked Oatway. “She looks confident leading from the backcourt. The group is super proud of how she’s made the role her own.”

The trio of Grade 12 captains – Mika Kurahashi, Gee and Tucci – has also done wonders by setting a great example on how to make everyone feel part of the team.

“There leadership has been outstanding. The Grade 12s have really brought everyone in and made them feel important.”

As the team takes the holiday break to recuperate from hectic schedule, the Vikings won’t have long to rest as a crucial test comes Jan. 6 when they visit Burnaby Central – who posted a very solid 3-1 record of their own to claim fifth place.

“(Central) is a very skilled team with a prodigious offence. We have to come back and be ready for them,” said Oatway.

The St. Thomas More Knights pushed it right to the final, while Burnaby South bounced back to capture bronze.

The holiday mood extended to a lot of participants at last week’s Wildcats-Vikings Senior Girls Basketball Showdown, which saw 2-A’s No. 3-ranked Britannia defeat Burnaby’s St. Thomas More – and No. 4 in the latest ranking – 73-58 in the championship final last Friday at Burnaby Central.

Fresh off of winning the Tsumura Invitational earlier in the month, the Bruins proved unstoppable at the Burnaby Central and Burnaby North-hosted tourney, going 4-0.

As part of the win, they garnered a cheque for $300 to deliver to the charity of their choice – CLICK (Contributing to Lives of Inner City Kids).

The Knights, who racked up three wins, including a 69-51 semifinal decision over Seycove, won $200 which they designated to The Door Is Open charity. Burnaby South, which rebounded from its semifinal 70-42 setback to Britannia with a thrilling 55-53 victory over Seycove, donated its $100 to Variety – the Children’s Charity. Seycove picked up $50, which they gave to Canuck Place.

The cohost Central Wildcats finished fifth, thanks to a dramatic 59-56 win over Cowichan, which gave them two wins on the final day. They also edged Little Flower Academy 63-61.

Also wrapping the tourney with two wins last Friday were the Vikings, who edged Moscrop 61-34, then topped Fraser Heights 71-41, to place 13th overall.

Moscrop, which was a late addition to the tourney, ended up beating the Burnaby North juniors in the 15th place game.