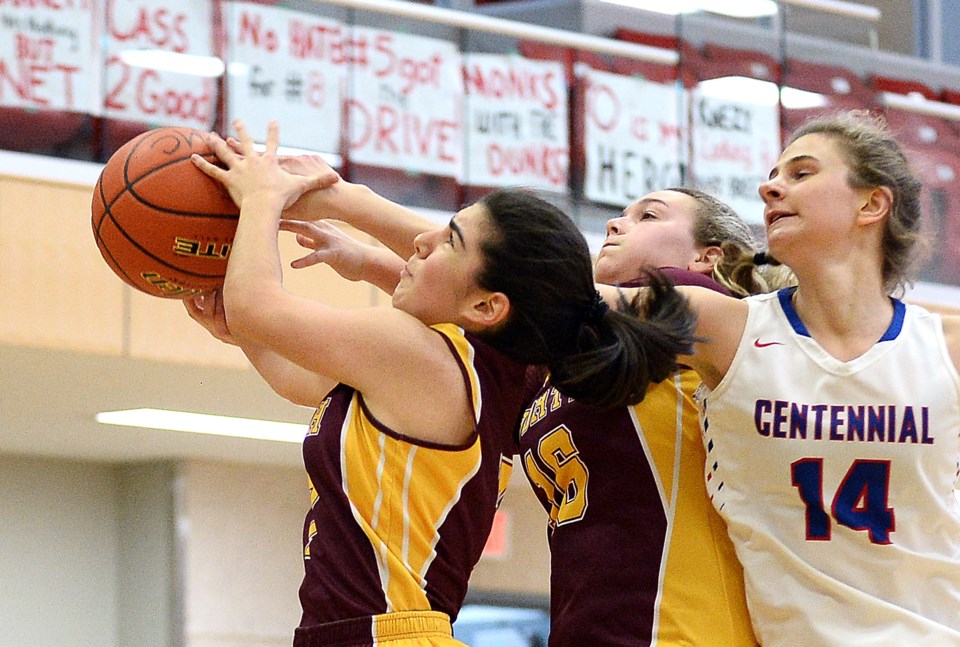 Burnaby North’s Maria Didak, left, and Italia Paris fend off a Centennial opponent during the St. Thomas More Chancellor senior girls tournament two weeks ago. Burnaby North and Burnaby Central are joining together to host this week's senior girls basketball tournament, where the top-four teams will win money to present to the charity of their choice.Jennifer Gauthier

The Burnaby North Vikings are ready to fill the void.

With the decision by New Westminster Secondary to not field a senior girls basketball team this season and pull the plug on a traditional Burnaby-New West league powerhouse, the battle for first is wide open.

It’s just a matter of putting the pieces together.

Burnaby North, Burnaby Central, Moscrop, Byrne Creek, Burnaby Mountain, Alpha and Burnaby South are all eyeing that top spot and a chance to create momentum over the next five weeks before the playoffs.

The Vikings head coach Jennifer Oatway believes balance and a deep bench will help her club contend for the chalice.

“This year’s league should be interesting, and without New West, who has dominated for so many years, I think it will be important who has the depth to play down the stretch,” said Oatway.

“This year, there is no one team that no one can catch. It’s wide open, and it’s a case where every team feels they have a shot (at winning the league).”

New West was undefeated in league play the past few years. And while they aren’t fielding a senior squad this season, the Hyacks are focusing on building a junior team that will compete next year at the top level.

Burnaby North, with 15 players at its disposal, is coming together and developing well, said Oatway, who shares coaching duties with Megan Scott.

“It’s a really exciting group to work with. We had a lot of kids come out for tryouts, and we decided to go with 15 (players) who are all athletic and dedicated and work well together,” she said.

The Vikings won their first league game, 81-33 over Byrne Creek two weeks ago, and did well to finish fourth at the St. Thomas More Chancellor Invitational tournament 10 days ago, beating Mark Isfeld 42-38 in the opener. Grade 11 forward Mika Kurahashi led the way with 12 points and 20 rebounds, while Sammy Gee chipped in 10 points.

In their next test, they put together a solid rally over the second half and cut into a 13-point deficit before falling 56-51 to Burnaby Central. Morgan Chow, one of five Grade 12s on this year’s roster, counted 15 points in the loss, while Kurahashi chipped in 12 and Taylor Tucci added 10.

This week, the North and Central unite as hosts of the Burnaby Senior Girls Showdown, which kicks off with games at both facilities today (Wednesday).

With 16 teams in competition, including Single-A No. 1-ranked Unity Christian, Double-A No. 7 Britannia, and league rivals Burnaby South and Moscrop, the tourney will be a perfect melting pot of skill-testing questions for coaches and fans alike.

Oatway sees this season as a development process, with returnees from last year’s Lower Mainland challenger bringing some vital experience to the court, and a lineup that includes Grade 9 Shannon Wu and Grade 10 Megan Perks amongst its ranks.

Leadership responsibilities will be shouldered by many, with captains Maria Didak, Chow and Kurahashi leading the way.

“This group comes to play, they’re energized and they are eager to learn,” she said. “I think the chemistry is developing quickly, and everyone’s on board with a goal to finish high enough to get to the Lower Mainlands.”

Another interesting element of the tourney, in its second year, is that four finalists will receive prize cheques to donate to a charity of the team’s choice. The winner on Friday will receive $300 and second place $200, while the consolation final winner nets $100 and fourth place finisher $50 to give away.

“It’s in keeping with the season, and I think it’s something which the players really get excited about,” added Oatway. “Teams that do well get to give something back to their community.”

Action begins at both Burnaby Central and Burnaby North on Wednesday, 3 p.m., with the Vikings taking on 2-A powerhouse Little Flower Academy, while the Wildcats host Windsor. Action continues at both sites through Friday, when the final is slated for 5:45 p.m. at Burnaby Central.