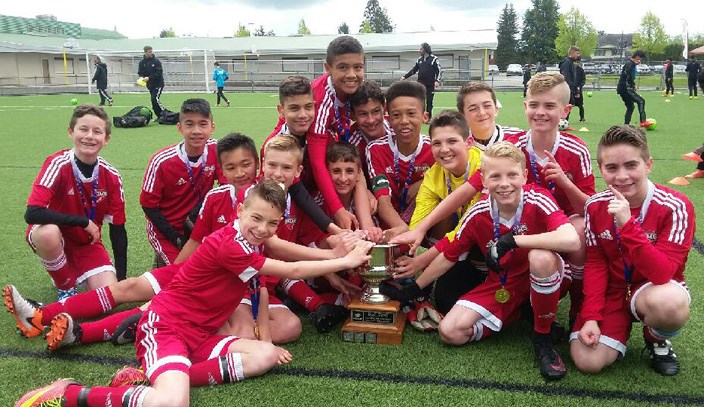 The Burnaby District Metro boys under-13 Wave celebrated their win in the Coastal A Cup final.Contributed

It was a main target all year, and now that it’s accomplished, the goal has just gotten bigger – and sweeter.
The Burnaby District Metro Soccer under-13 boys Wave 2 completed their first mission – that of winning the Coastal Cup crown, with a 2-0 shutout over Fraser Valley last week.
A patient, strategic performance helped keep the boys on course, even after falling to 10 players upon losing a forward early in the game due to a red card.
“The boys just played an incredible game, they were very focused,” recalled coach Rino Consiglio.
The squad, making the most of the transition to an 11-v-11 year and playing on the big pitch, scored early and looked in fine form against their old rival – with whom they had played twice during the season, winning 1-0 and losing 2-1.
But when striker Tiago Coimbra received a red card minutes after giving the Wave a 1-0 lead off a penalty kick, for bumping into Fraser Valley’s goalkeeper, things got interesting.
“The boys weren’t rattled, they just hunkered down. We got to talk with them at halftime, about staying the course,” said the coach. “They were pretty even-keeled through the whole thing.”
Upping the lead was Mateus Bussanich, whose one-timer provided a soft cushion in which the defence protected.
The victory earned the Wave a ticket to the provincial A Cup championships in July.
With the team comprised primarily of players from Wesburn and Cliff Avenue, there was some familiarity in which to build upon. But the coaches took it upon themselves prior to the start of the season to speed up the chemistry and confidence with a training camp.
“We held a sort of mini-camp in August at Burnaby Central, just our team, and worked on things during the week,” Consiglio said. “The key was they got to bond and work on everything together.”
They finished atop the u13 boys division with an 11-0-2 record; Burnaby’s lone losses came at the hands of Port Moody and Fraser Valley.
Any obstacles they faced were cleared smoothly, thanks to an eagerness and commitment the players brought to each and every day at the pitch.
“They came in and were well prepared,” added Consiglio. “They just wanted to learn, and came committed to the program and every practice.”
They began the Coastal Cup march with a 3-0 win over West Coast in the round of 14, and a 4-1 decision over Central City. In the semifinal, Coimbra scored four times and Tyler Lee added a single in their 5-0 shutout over Surrey.