Wildcats aim to live up to pre-season surprise ranking

It came out of left field, but the coaches of the Burnaby Central senior girls Wildcats hope to mine it for motivation. The fact that the program was ranked among the top-10 in the B.C.
Apr 2, 2020 4:20 PM By: Dan Olson 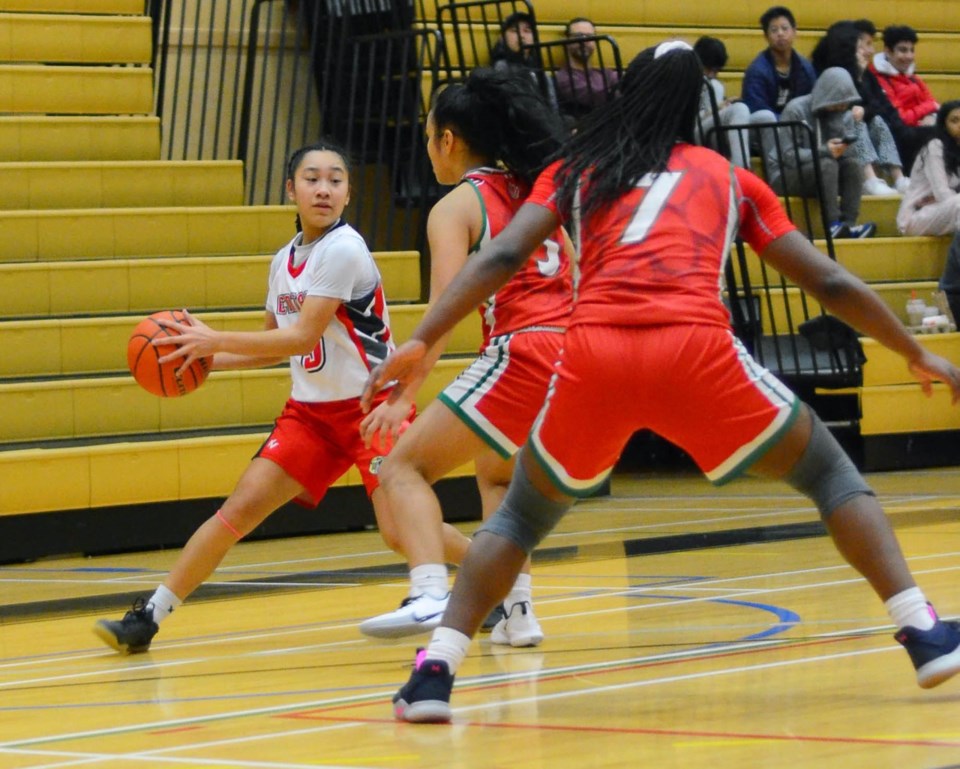 Burnaby Central point guard Jade Huynh, at left, was a prime reason why the team went undefeated during the Burnaby-New West league regular season last year. She’s one of the young leaders the team that helped earn the Wildcats a spot on the 2020-21 senior girls 4-A preseason rankings.Cornelia Naylor

It came out of left field, but the coaches of the Burnaby Central senior girls Wildcats hope to mine it for motivation.

The fact that the program was ranked among the top-10 in the B.C. School Sports Girls Basketball Association’s 2020-21 pre-season poll is a tip-of-the-hat for a youthful lineup with a lot to prove.

For assistant coach Peter VanDenHoogen, the potential is there for the squad to make next year’s provincial derby – but a lot of things need to come together before the season starts next December.

“I think it’s humbling for sure but I also think its inspiring for the girls to see that we’ve cracked the top-10 in the province, a very rich basketball playing province,” remarked VanDenHoogen, who works alongside head coach Chris Ducharme. “(Last season) was definitely a growth year. We had three Grade 8s who played up sometimes with us. We have a very young team.”

Youth and talent combined could be the perfect recipe for a program that’s not tasted any provincial action since the Gen-Y era.

Led by Grade 9 guard Jade Huynh and Grade 11 forward Priya Dhaliwal, the Wildcats pushed the envelope and dominated during the regular season last winter, going undefeated until the playoff final when Burnaby South captured the title. In the inaugural Fraser North playdowns – pitting the best from the Burnaby-New West league and the Coquitlam district – it was the Rebels once again who did the damage, ending Burnaby Central’s season in a 65-54 loss in the quarter-finals.

“That was a heartbreaker for us. … Burnaby South beat us (in the league final); then they beat us in the Fraser North tournament. Our adversity was that we rolled along easily to start the year; then when we saw South again they put a pounding on us,” said VanDenHoogen.

“Jade is a very quiet leader, but she’s the point guard. If she wants to continue to develop, she needs to be a voice from the back court,” he noted. “(Dhaliwal) is a gifted athlete and a coach’s dream to coach, but she doesn’t play physically. When she practises with us, she’s physical. It just doesn’t translate to the games.”

The team also benefited from the contributions of the Grade 8 trio of Ankita Chopra, Vobia Kalome and Jayla Huynh, who were part of a perfect season with the bantam squad, coached by the eldest Huynh sister, 2019 grad Jalynne.

VanDenHoogen said the three have an opportunity to make the big jump, but it will all depend upon if they’re ready to handle the rigours of the more physical, grittier senior circuit.

“The problem with some of the younger kids is that they’re not strong enough physically to play the whole year at senior, so you have to decide which level they’ll play at,” he said.

And while the Wildcats have all the elements to continue the upward trajectory, the first step is always thriving at the league level. Burnaby South, which finished 10th at the provincials after placing third in the Fraser North, will try to better that achievement, while teams from New West and Burnaby Mountain, among others, will also be in the mix.

Then there’s the Fraser North challenge, which replaced the former Lower Mainland route to the B.C.s. The crowd of formidable rivals from Coquitlam include fellow ranked Terry Fox (No. 4), Riverside (No. 5) and Heritage Woods (No. 9).

“When the World Cup (of soccer) comes out there is always a Group of Death. We’re in the Group of Death (Fraser North) for girls’ basketball. ... There were legitimately three of the top-5 teams in the province arguably (last year), so the provincials are a tough slog in Fraser North.”

Still, at this stage, with no teams permitted to play or practise due to the COVID-19 pandemic, so much remains up in the air. Just knowing others see the squad’s potential is a nice feeling, VanDenHoogen said.

“It’s new territory for us and we’ve never swam in deep waters before. So I don’t know what we’ll do, to be honest. I was surprised (to be ranked), but talent-wise I think we can be a top-10 team.”