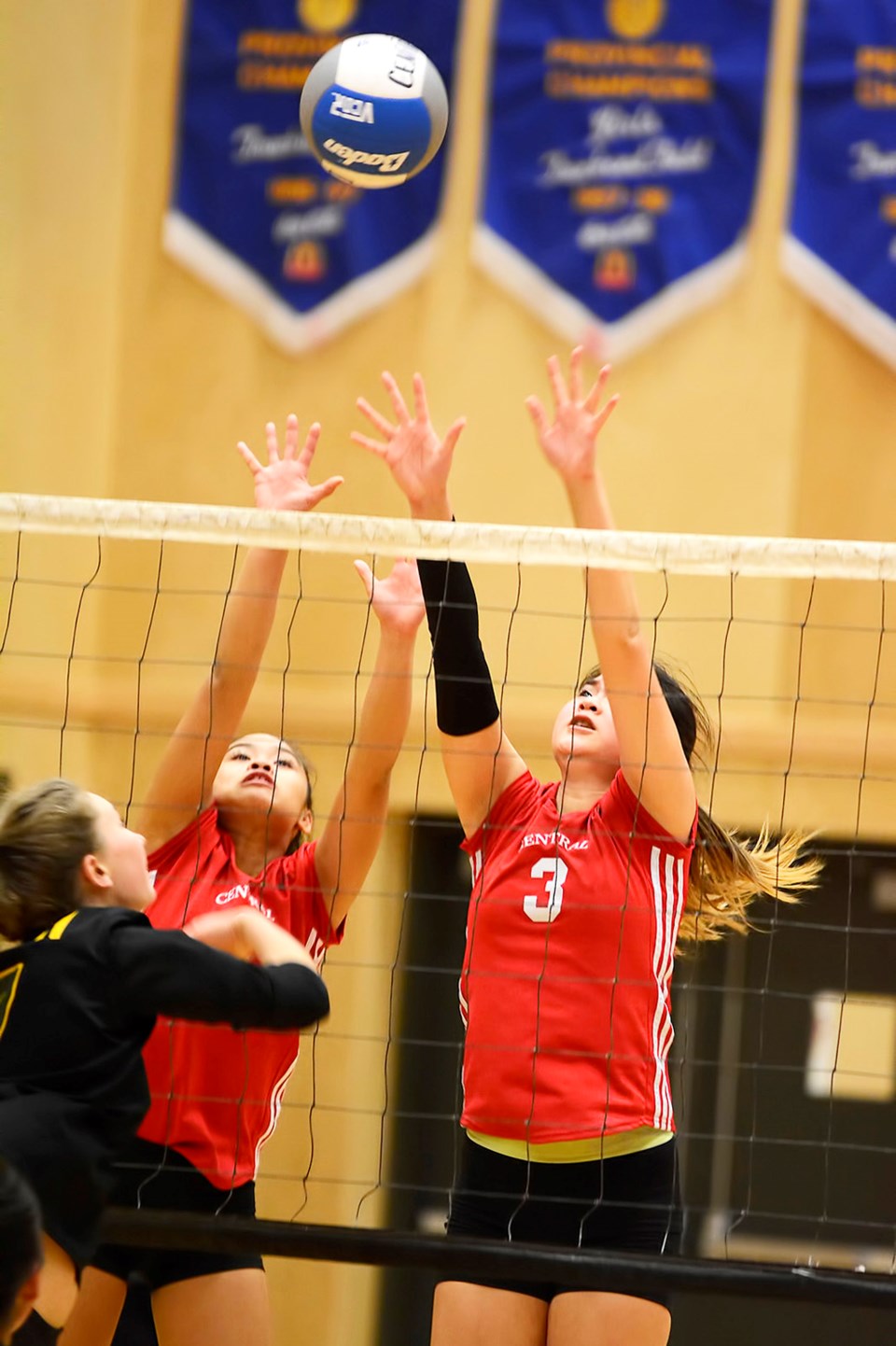 The Burnaby Central Wildcats proved too hot to handle in both the senior boys and girls league finals. The boys emerged with the league banner after a tough challenge from Moscrop, while the girls reclaimed the banner, last winning it in 2017, with a big victory over Burnaby North.NOW file

The school’s senior boys and girls teams entered Tuesday’s Burnaby-New West volleyball championships with differing storylines – one a hungry underdog, the other a heavy favourite – and racked up a sweet sweep to take the league’s top berths for next week’s zones.

In what were marathon decisions at opposite ends of the district, Burnaby Central players came together, after the senior girls’ final went past 10 p.m., to celebrate the double win.

The Burnaby Central senior girls faced both internal and external tests en route to a 3-0 win over Burnaby North in the league playoff final at Burnaby Central.

When you expect to win, one of the best tools in your toolbox is confidence. There’s no doubt that the Wildcats have that. They also have the fortitude to not throw it around.

In the first two sets against North, the visiting Vikings kept pace in the early going before the Wildcats caught fire. After going 7-0 in the regular season, with just one set loss, the Wildcats’ confidence was pretty strong. But the team is all about not taking anything for granted.

“We just try to keep as humble as possible. We knew North was one of the top teams so we tried our best and came out on top. I’m super grateful for that,” remarked Wildcats captain Anna Park.

With the first game knotted at 11, Alysha Sidhu delivered a momentum turning smash to the back row that started a 14-3 run. She followed that with a big block at the net to make it 14-11.

In the second set, Sidhu and Park blocked a North net shot to break a 9-9 stalemate, igniting a 16-6 march.

They wrapped it up 25-12 in the third set, with Park digging out a centre ball that Clair Wang buried to trigger a 12-5 closing drive.

Central head coach Sharon Snow said the core leaders of this year’s Wildcats are still benefitting from their raw introduction to the B.C. AAAA level two years ago, as Grade 10s, they debuted with a league banner, and now close it out with another.

“We set a solid game plan, we knew what we wanted to do. We knew how we wanted to execute. We spent most of the season setting up that game plan, executing it as best we could and staying with it. We didn’t want to get caught up with other things,” said Snow.

That they melded well with the incoming Grade 10s and 11s, who spent last season under the tutelage of assistant coach John Wong, was another vital part, she noted.

“Bringing them together and saying, 'This is what we’re going to do, this is the system,' and having the kids buy into it, and having my seniors care about it, not worry about making mistakes; let’s move on,” said Snow.

While they’ve bolstered their resume with strong tournament showings, including a couple of titles, the lone blemish in league play – a lost set against Moscrop – was a constant reminder of what they need to do.

“That definitely did shake us, but again, it bent us and didn’t break us,” recalled Park.

“We need to keep pushing, we need to keep trying to get more goals, and we need to achieve on top. That’s the only thing we need to do. We have to keep motivating ourselves and stay strong as a team together.”

Burnaby Central will play host to next week’s Fraser North zone tournament, where the top teams from Burnaby-New West, Coquitlam and Maple Ridge districts will battle for berths to the provincials.

CENTRAL BOYS RISE TO THE TOP

They knew, and some may have doubted.

But when the final spike was counted, the Burnaby Central Wildcats were kings of the Burnaby-New West senior boys volleyball court.

The Wildcats, who finished tied for second place in regular season play, defeated Moscrop 3-1 in the AAA final in New Westminster, capping an impressive week where they had two big character reveals.

After staking out a 2-0 lead in the final, Central found itself staring at a huge 2-16 hole as the Panthers put in a charge to get back in the game. Instead of folding and looking towards the fourth set, the Wildcats refocused and put up a valiant battle before falling 23-25. They’d take the momentum that they used to close the gap into the fourth set and wrapped up the title with a 25-20 decision.

“We said ‘Don’t worry about the beginning, focus on what you just did, coming back (from 16-2), and that’s the team we want on the court,' ’” recalled Central coach Graham Hendry.

Before they had that clarity, the Wildcats faced another dilemma, this time in last week’s quarterfinals. Down 2-1 to Burnaby Mountain, Central had its back to the wall and trailed 23-24, with season-ending elimination just a point away.

“We were one-point away from losing the entire season but we came back that set and won the next set 15-11. That was close,” said captain William Jin.

It was just another demonstration of resolve and redemption, with some returning veterans recalling how Moscrop had taken them out in last year’s league final.

“Last year we were ranked at our peak seventh (in B.C.) at one time, so we were a fine team. Moscrop was equally as strong, ranked fourth and finished fourth,” recalled Jin of 2018. It’s a different feeling this time around.

“It feels amazing, honestly. It doesn’t feel like real life. I’ve been thinking about it since the summer, planning out the season.”

Just a few weeks ago, Burnaby Central made the provincial AAA rankings as an honourable mention.

In 13th place and a regular member of the top-15 list, rival New Westminster was upset by Moscrop in the semifinal. The Hyacks rebounded to place third, beating Burnaby North. All four teams advance to the zone playdowns.