It's been a whirlwind two months journey for the Burnaby Central Wildcats. The senior girls volleyball team has worked extra hard and wasted little time in filling the schedule with quality games in pursuit of being the best they can be.
Nov 21, 2019 11:16 AM By: Dan Olson 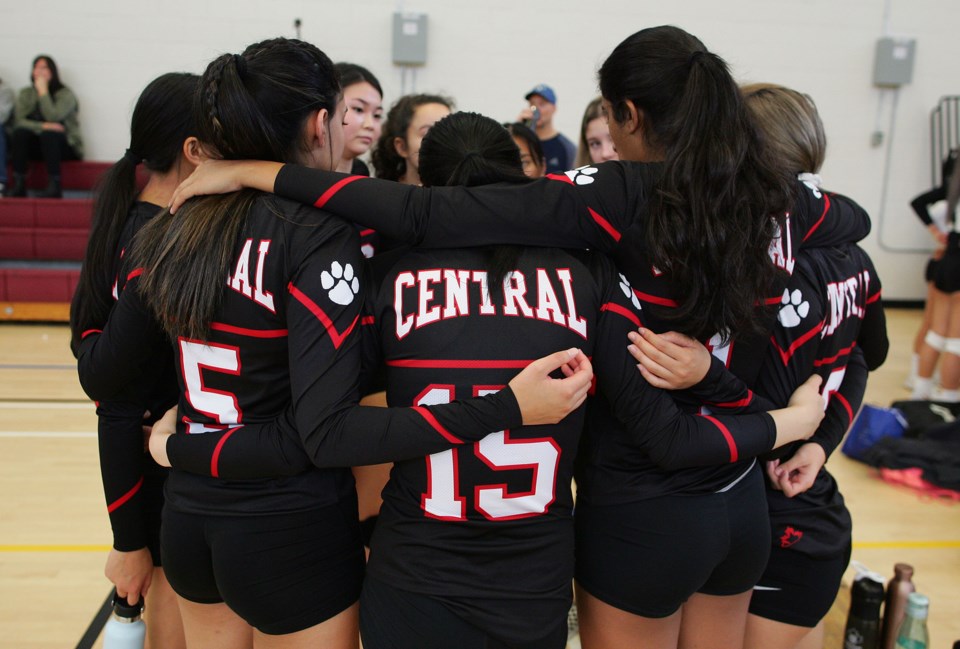 The Burnaby Central Wildcats continued their winning ways last week, capturing the Fraser North zone banner by beating Riverside 3-1 in the final. They now head to next week's AAAA provincials in Langley with some helpful momentum.Lisa King

It's been a whirlwind two months journey for the Burnaby Central Wildcats.

The senior girls volleyball team has worked extra hard and wasted little time in filling the schedule with quality games in pursuit of being the best they can be.

Now, the Wildcats get to tack on another week of play, after achieving the end goal of qualifying for the B.C. AAAA volleyball championships.

By beating the Riverside Rapids last Saturday 3-1 in the inaugural Fraser North playoff championship, Burnaby Central checked off one of their big items on the to-do list.

Although it wasn't easy, the victory demonstrated the kind of character and determination which has served the scrappy, honest squad well over a 13-week march to a provincial berth.

"Coming off the league win and hosting (Fraser North) zones we just wanted to keep (the momentum) going," noted Central coach Sharon Snow. "We just refocused and re-set our goals, laid out the game plan we though would work."

Although they had never played the Rapids this year, the Burnaby-New West league champions had researched them and watched them in the run-up to the final.

With wins over Burnaby South and Burnaby North locking up both a spot in the zone final and a provincial berth, the team didn't want to let that roll falter.

The Wildcats won the first two sets 25-20, 25-20, but got pushed back by Riverside 19-25 in the third set. The crucial fourth set was a marathon that saw the PoCo school jump ahead 17-12 before Burnaby Central battled back to tie it 22-22. While the Rapids scored the next point, it was the home team that bolstered its resolve, regaining serve and finishing it off with the final three points to prevail 25-23.

"We had moments where we had to fight back. ... It was at that time we made some mistakes and errors we just normally don't make," noted Snow of the hole they found themselves in during the fourth set. "We called a time-out (when down 17-12) and regained our composure. I was really proud of the girls and how they came back."

Team captain Anna Park made some outstanding plays that helped turn the tide.

"She dove to the floor and put the ball back up, and the whole crowd kind or rose on that moment," said Snow.

Also turning in standout effortswere Megan Cao, Leah Fernandez, who the coach cited for their excellent passing throughout the tournament, and Alysha Sidhu.

It was a full-team effort, buoyed by the route they had taken to get there.

Snow said the team's skill level and resilience for the playoffs and provincials has been formed over a strenuous wave of tournaments, packed onto a squeezed two-month league schedule.

The week prior to the zones, No. 10-ranked Burnaby Central competed in their seventh tournament since the start of September, the Peace Arch tourney, where they defeated Seaquam and got to test their mettle against No. 4-ranked Mission, which would go on to win the tourney.

"We've been up against a lot of teams, seen a bunch of teams that really challenged us. I definitely feel that the tournaments we've played in have set us up for the playoff run," added Snow. "It was really a confirmation that we could pass against those teams."

In such a compact season, Snow and assistant coach John Wong saw the biggest challenge was first to get everyone in harmony and working together -- with a returning senior core and a talented youthful group making the jump up from junior.

"That was the challenge at the beginning of the year, getting the young incoming group to buy-in and feel comfortable, and making sure everyone was on the same page," she said. "Our strategy is that we like to run a system and stay with the system, but it doesn't work if people don't buy in."

The focus now is staying true to that system, while preparing for a completely new slate of opponents. Burnaby Central is in a pool with No. 6-rated Lord Byng, No. 9 Dover Bay and unranked Sardis.

"You don't make it to the top-20 in the provincial if you aren't half-way decent," Snow said. "We've basically carried this theme through the year: be quietly confident and stay humble, and work. That's what has worked for us."

Action begins next Thursday at the Langley Events Centre, as the Wildcats open against Sardis at 8:30 a.m., then play Dover Bay at noon.

For more on the AAAA provincial schedule, visit www.bcssvolleyballchampionships.ca.