The season isn’t long – barely eight weeks, if you’re good enough to push it forward to the championship tournament – but if it goes the way they hope, it will be sweet.
Oct 6, 2018 11:30 AM By: Dan Olson 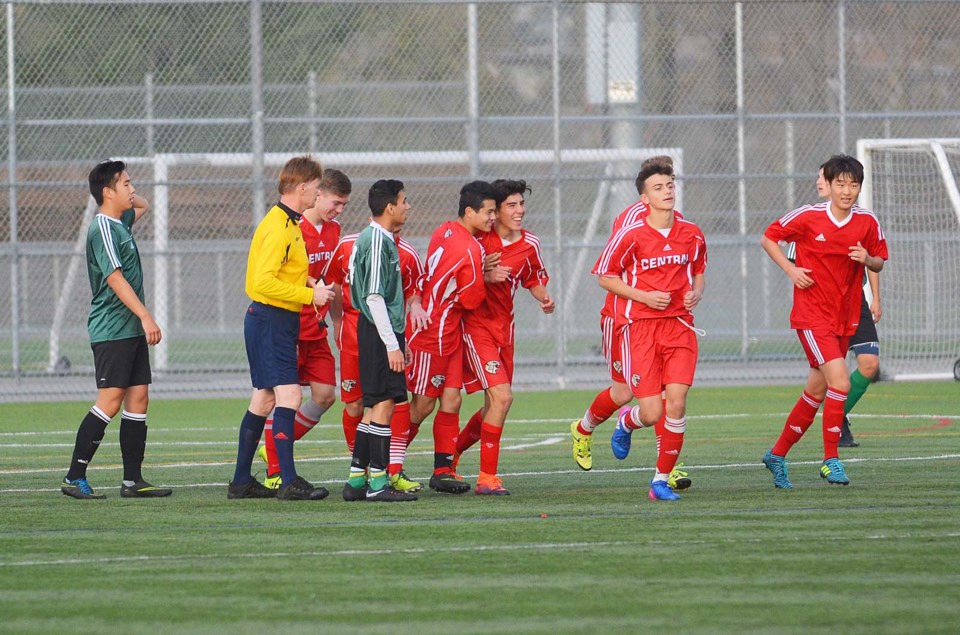 The season isn’t long – barely eight weeks, if you’re good enough to push it forward to the championship tournament – but if it goes the way they hope, it will be sweet.

The Burnaby Central Wildcats have a plan, built on years of playing together, plowing through coaches’ drills and bonding on the pitch.

This year’s as good as any to fulfill it.

Off to a 4-0 start, the Wildcats have their eyes on the provincial AAA soccer championships, which conveniently are scheduled for late November at Burnaby Lake complex.

Although their aim may be true, Burnaby Central’s coach is making sure they know there’s a route to get there, and they’ve got to keep their eyes on the road at all times.

“We have 12 returning guys, and about nine Grade 11s, and of those nine (players), seven play on the same (club) team,” remarked coach Ivan Steko. “They’re familiar with each other, they know where each other is and where to be, and that is half the battle when coaching high school sports.”

On Wednesday, they handed Burnaby North a 2-0 loss on the strength of a pair of Carson Bushman-Dormond goals late in the contest. Although the visiting Vikings locked it down and limited Central’s offence over most of the contest, the Wildcats’ attack eventually found an opening.

“With about 12 minutes left, Carson got some space and hit a nice left-foot shot down to the corner, then did the exact same thing around five minutes later. I think that one goal deflated North. I think they were playing for the tie and hoping to catch us in the counter (game),” said Steko.

Burnaby North, which was enjoying a two-game win streak prior to their Central encounter, offered up a strong defensive test. It proved to be the Wildcats’ toughest test so far.

“(Our) guys kept going, we kept coming in waves. ... We thought, if they want us to attack, we’ll bring more guys in. I think because of those constant, constant waves it probably gave us extra space, slowed them down and they got tired.”

The Wildcats began the week with a 5-0 victory over the Cariboo Hill Chargers and were challenged a week ago in their contest with Alpha.

With a large core of returnees and most having some connection to their teammates through HPL or metro soccer, the chemistry is strong, Steko said. A few players also remain from Central’s Whitecaps Residency program, which moved to UBC a year ago.

“Because they were already educated here they chose to stay here – so it’s not your common high school team. We’re kind of reaping the benefits of that and hope it leads to something bigger.”

Led by captains Adrien Labreche and Niko Mrakic, the squad is deep at every position. Steko had to wade through 40 players at tryouts and make some difficult decisions to get the roster down to a manageable 20.

"We have game breakers in Kyle Hanson, Matias Estay and you can’t argue with Carson with two goals (Wednesday). He’s a handful," said Steko. "They know where he’s going – left, left, left, and he still scores. In the back we have Nicholas Momantani who is just fantastic. I’ve got everyone – our bench is as good as our starters. It’s a good problem to have."

Now they want to improve on last year, when they finished 10th at the B.C.s.

“They’ve set (the goals) for themselves. They want to finish top-three for provincials, but we have to get there first. If everything goes well and we come out of Burnaby, their goal is top three. (From 10th last year) is a significant jump, but everyone is talking about how good this team is.”

In other action Wednesday, Burnaby Mountain improved to 3-0-1 with a 2-0 shutout over Byrne Creek, Burnaby South knocked off Cariboo Hill 3-1, while Alpha trounced New West 6-1.

Burnaby Central’s next game is against the only other team without a loss so far, Burnaby Mountain, Oct. 10 at Central.