It appears the Burnaby South Rebels boys basketball program has found what famous explorer Ponce de Leon spent a great part of his life searching for. The fountain of eternal youth certainly seems tapped into the Rebels roster.
Dec 5, 2019 12:42 PM By: Dan Olson 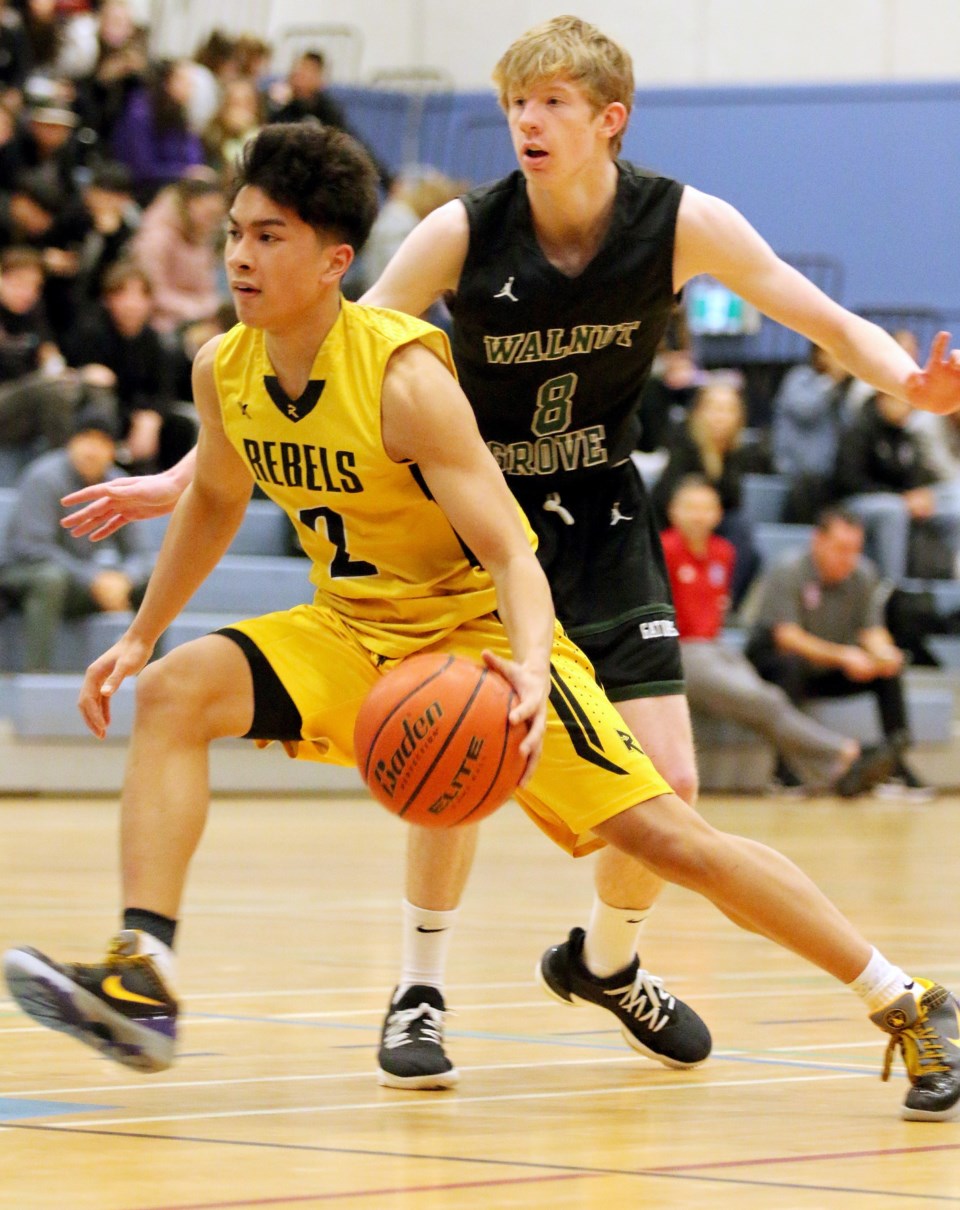 Burnaby South Rebels' guard Justin Sunga drives into the key during the team's 90-56 opening round win over Walnut Grove at last week's Heritage Woods Kodiaks Klassic. Sunga would be named tourney MVP as the Rebels rolled undefeated through the first tourney of the senior boys season.Mario Bartel/TriCity News

It appears the Burnaby South Rebels boys basketball program has found what famous explorer Ponce de Leon spent a great part of his life searching for.

The fountain of eternal youth certainly seems tapped into the Rebels roster.

While misfortune may have created a couple of holes in the lineup to start the 2019/20 senior boys basketball season, it’s proven to be more evidence of a fortune of opportunity for Burnaby South’s flow of youthful talent.

The No. 1-ranked team in B.C.’s 4-A conference, the Rebels are riding the wave of young guns as they enter today’s Tsumura Invitational tournament, fresh off a 4-0 march through the competition at last week’s Heritage Woods Kodiak Klassic.

While tough-luck injuries to Grade 12 starters and leaders Sasha Vujisic, the team’s six-foot-10 centre, and Emir Krupic would send most programs for a loop, the Rebels buckled down and threw a lineup out that was Grade 11 and 10s, and barely skipped a beat.

“Obviously it’s a big obstacle because those are two kids who we see feature roles on our team, but it’s just back to next-man-up,” remarked South head coach Mike Bell. “Just be tough and be ready with the chance you’re given, and compete when you’re number is called.”

No doubt about it, the squad did just that over four games in Port Moody and Coquitlam last week, wrapping with a convincing 90-50 victory over No. 4-ranked Handsworth in the final.

Led by tourney MVP Justin Sunga, with 30 points, and Jareb Pineda for 21 – both Grade 11s – the squad put up 90 points in three of the wins, with the closest margin a 76-62 semfinal decision over Kelowna.

In that tilt, Burnaby had to flip a 39-32 halftime deficit, but did ramped things up to pull it out of the fire.

Sunga was again the team’s top scorer, cashing in 23 points, while Grade 10 forward Karan Aujla counted 21 points and Pineda with 18.

Both Aujla and Jared Pineda were named to the all-star squad.

In his second season with the senior squad, Sunga has taken another step in being able to command a high-tempo tone in directing the offence.

“Bringing (Justin) up last year with the other boys really got him to see the senior level, but he’s a kid who’s been challenged every year, pushed every year,” said Bell. “The kid’s ultra-talented. His vision of the court is so far beyond others, he just sees things before they happen and is able to adjust. He just finishes strong around the hoop – a very tough and smart kid.”

Averaging 26 points a game, Sunga has settled into a bigger role, while Grade 12 Matthew Pineda has shouldered a big portion of the leadership void lost through injury and the graduation of last year’s floor marshals Jiordano Khan and Kyle Kirmaci.

“(Matthew Pineda) has taken on a bigger role. He’s who I turn to to talk to for all the leadership purposes,” the coach said. “The team really looks up to him. He does everything for us. He’ll go in and take on a bigger guy, he’ll go in and take on a littler guy. Throughout our team we’re under-sized until we get Sasha back, we’re pretty small, and that usually falls on Matt’s shoulders but he’ll battle on and take it.”

The senior Pineda brother impressed his coach by how he sets the pace on both sides of the ball, and throws himself into his role.

“They take pride in the offence as well as pride in the defence, and it really starts with (Pineda). Matthew’s just willing to put his body in the way of everything – he had 14 charges in four games.”

Moving up from last season’s undefeated provincial champion junior Rebels lineup, Jareb Pineda and Grade 10s Jimmy Zaborniak and Aujla are staking out prime minutes and roles, a carry-over from all they learned in a 34-0 run a year ago.

“I think they’ve gone through a lot of battle testing. Splitting them up and challenging Justin (with the senior team) last year as a Grade 10, leaving Jareb down with Jimmy and Karan, helped them grow together. Justin and Matt are such solid leaders that it just flew together.”

What keeps that theme going is the fact that the current junior Rebels appear to have not skipped a beat, cashing in with a 5-0 stroll through the Big Ticket tournament last week, ending with a 65-53 win over Gladstone.

Challenging kids to go that extra step in developing is a program initiative that continues to pay dividends.

“As a kid who was normally been in the shadows, kind of like Jareb last year who played behind Justin – Zach is being challenged to play a leadership role after playing a lot behind Jimmy (Zaborniak). We’re just kind of making sure no kid is really comfortable and is always being challenged for a bigger stage and they adapt and learn,” said Bell.

With this year’s senior Rebels, the challenge is not necessarily to ignore the press clippings and rankings – last year’s provincial third-place finish, with Vujisic sidelined to an ankle injury, serves as a reminder.

Meshing together as one and creating momentum going towards the playoffs are part of the process. Surviving the obstacles and injuries that befall many a team is another key.

Bell is eager to see it unfold at its own pace.

“It’s still early in the year and no one is playing their best basketball. We all want to be playing our best basketball hopefully near the end of February and going into March,” said Bell. “Everyone else is going to get good, we just want to be sure we’re pushing ourselves to be better.”

The Tsumura Invitational continues until Saturday, with the championship final slated for 8:30 p.m.

Burnaby South will dive into the Burnaby-New West league on Monday when they visit Burnaby Central (7 p.m.). The team will also be hosting it's annual Rod Thompson Rebels Classic tournament, beginning on Dec. 19.