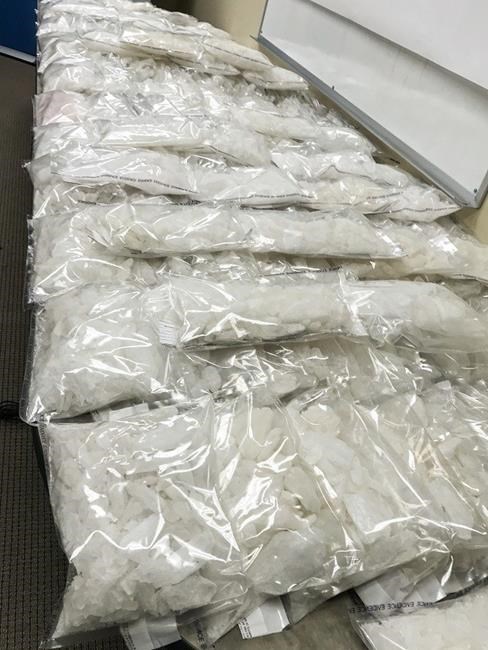 The agency says in a news release that officers flagged a produce truck for further inspection as it entered Canada from the United States at the Coutts border crossing on Christmas Day.

It says they found more than 228 kilograms of meth inside with an estimated street value of $28.5 million.

Border agents arrested the driver and handed the investigation over to the RCMP.

The RCMP Integrated Border Enforcement Team has charged Amarpreet Singh Sandhu of Calgary with importation of a controlled substance and possession for the purpose of trafficking.

The 38-year-old suspect was released from custody on Jan. 14 and is to appear in Lethbridge provincial court on Feb. 11.

“While many Canadians were celebrating Christmas at home, border services officers at Coutts remained on the front line to protect our country," Ben Tame, who directs the border agency's southern Alberta and Saskatchewan districts, said in the statement Wednesday.

RCMP Supt. Allan Lai said the operation's success is a testament to the strong partnership between the national police force and the border agency.

"We know that crime has no borders and it is imperative that we continue working with our partners, like CBSA, to share information and co-ordinate enforcement action as needed to keep Canadians from the harms of illegal drugs and crime related to smuggling in Alberta and all of Canada.”

This report by The Canadian Press was first published Jan. 27, 2021.