Canada's chief public health officer is warning that the decline in COVID-19 case counts is slowing as several provinces battle surging waves of the virus.
May 10, 2021 4:44 PM By: Canadian Press 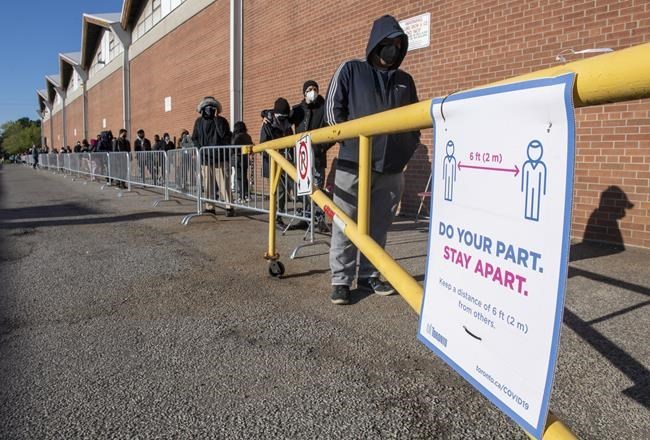 Canada's chief public health officer is warning that the decline in COVID-19 case counts is slowing as several provinces battle surging waves of the virus.

While there were signs of hope that Ontario and Quebec were making progress on Monday, provinces to the east and west continued to struggle.

Manitoba Premier Brian Pallister said that his province is in the midst of a third wave of COVID-19 despite a long fight to stave it off.

"We’re in a race between the variants and the vaccines, and more must be done to ensure the variants don’t win," he said as he announced expanded financial assistance for businesses.

The province recently brought in a number of new public health restrictions, and on Sunday it announced that schools in the Winnipeg and Brandon areas will be moving online beginning Wednesday until at least May 30.

COVID-19 case numbers have also been high in Nova Scotia, which closed its provincial boundaries to non-essential travel on Monday to try to limit the spread. Nova Scotia's travel rules are in force until at least the end of the month, and an application process for most travellers will be introduced by May 14.

While the total number of new infections across Canada has been declining across the country since mid-April, Canada's chief public health officer Dr. Theresa Tam said disease activity is "elevated or increasing" in many jurisdictions, threatening the overall progress.

"The latest national-level data show the decline in national case counts has slowed to a less than 2 per cent decrease over the past week, with an average of 7,749 cases being reported daily" for the week of April 30 to May 6, Tam said in a statement.

Health officials in Iqaluit, meanwhile, sounded the alarm about rising COVID-19 cases in the city's shelters and correctional facilities after at least 18 positive tests in those settings. A seniors home in the city was also evacuated over the weekend after a staff member tested positive for COVID-19.

The news was better in Canada's two biggest provinces, which both continued a recent trend toward stability.

Ontario's hospitalizations and active cases continued a slow decline, as the province announced it is now receiving enough vaccine to allow health-care workers to begin booking their second shots in the coming days.

Like other provinces, Ontario had extended dosing intervals to four months, but officials said Monday some high-risk workers may now be able to get their second shots earlier than previously thought.

However, Ontario's health minister suggested that the encouraging signs in the province may not be enough to lift a stay-at-home order currently in place until May 20. "(Medical experts) have advised us to stay the course for now," Christine Elliott said, adding that officials "need to see a pretty significant drop in the numbers of cases." The province reported 2,716 new COVID-19 cases and 19 more deaths Monday.

Quebec announced Monday that it has given second vaccine doses to all long-term care residents, as it reported just 662 new cases.

But while the province's situation was stable overall, officials were still dealing with a flare-up in the Estrie region east of Montreal, which was moved from the orange to the red alert level on Monday. The move means restaurant dining rooms and gyms must close, among other restrictions.

New Brunswick, meanwhile, announced that the only part of the province that had been under the orange alert level of the province's COVID-19 response plan would be moved to yellow at midnight, allowing some restrictions to ease.

British Columbia's daily case counts dipped below 600 for the first time since March, for a three-day total of 1,759, although there were another 20 deaths over the same period.

Everyone 18 years and older in high-risk communities are allowed to book their vaccination appointment and those in their 40s elsewhere in B.C. can ask for a shot, said provincial health officer Dr. Bonnie Henry.

Canada is scheduled to receive two million doses of the Pfizer-BioNTech COVID-19 vaccine this week, allowing provinces continue to ramp up their immunization efforts.

Alberta began accepting vaccination appointments for children as young as 12 on Monday, while several other provinces expanded eligibility to younger adult age groups.

Saskatchewan on Sunday announced that more than 70 per cent of residents over 40 had received a first dose of a COVID-19 vaccine, surpassing the bar to trigger the first step of the province's reopening plan. The milestone means that on May 30, restaurants and bars can open, places of worship can fill to 30 per cent capacity and group fitness classes can resume.

This report by The Canadian Press was first published May 10, 2021.