SPRINGFIELD, Mass. — The American Hockey League has postponed three Toronto Marlies games over the next week due to league COVID-19 protocols.
Apr 14, 2021 11:35 AM By: Canadian Press 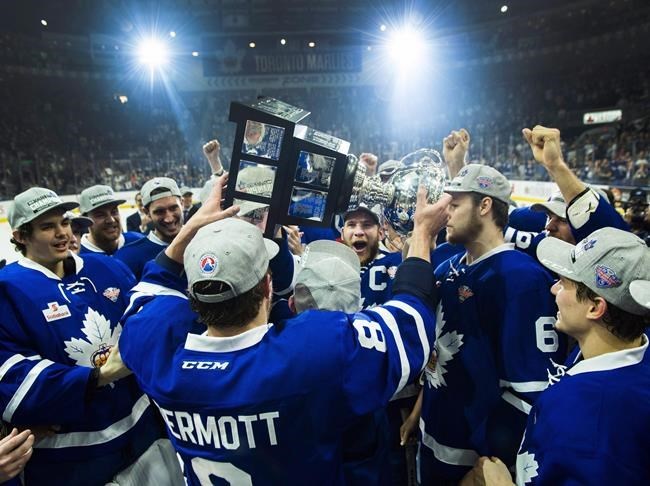 SPRINGFIELD, Mass. — The American Hockey League has postponed three Toronto Marlies games over the next week due to league COVID-19 protocols.

The AHL announced the postponements Wednesday, but did not elaborate on why the Marlies were entering league protocols.

Toronto's games Thursday and Sunday at Laval (Montreal) and April 21 at Belleville (Ottawa) are affected by the AHL's decision. The league says make-up dates have yet to be determined.

The league is also moving a May 9 Laval at Belleville game up to April 21.

Toronto last played Saturday against visiting Laval. As of now, its next scheduled game is April 23 at Belleville.

Sports in Canada have been hit hard recently as the country struggles to contain the third wave of the COVID-19 pandemic.

The Vancouver Canucks are working their way back from an outbreak that saw 22 roster players and four members of the coaching staff test positive.

This report by The Canadian Press was first published April 14, 2021.

Tennis Canada could move top tournaments to US if Toronto, Montreal plan not approved
May 12, 2021 9:47 AM

Leafs, Habs will face off in long-awaited playoff rematch, Oilers will face Jets
May 12, 2021 6:05 AM
Comments