I've seen a few Tweets following last week's oil spill, suggesting Kinder Morgan stands to profit from the incident, mainly because they are shareholders in Western Canada Marine Response Corporation, the company the handles oil spill cleanup on the
Jennifer Moreau Apr 16, 2015 11:36 AM

I've seen a few Tweets following last week's oil spill, suggesting Kinder Morgan stands to profit from the incident, mainly because they are shareholders in Western Canada Marine Response Corporation, the company the handles oil spill cleanup on the West Coast of B.C.

It's true they are shareholders, but the relationship is a bit more complicated.

In 1976, oil companies pooled their money to create Burrard Clean, a co-operative to clean up oil spills. In 1995, there were changes to the Canada Shipping Act that required Burrard Clean become federally certified, and the name changed to Western Canada Marine Response Corporation. This private company is still industry funded. The idea is taxpayers shouldn't have to cover the cleanup operations, and if there's a spill, the company at fault pays for the cleanup.

WCMRC's shareholders are Imperial Oil, Shell Canada, Chevron, Suncor and Kinder Morgan's Trans Mountain pipeline. (Chevron is the only one of the first four still operating a local refinery.) Kinder Morgan (aka Trans Mountain in this case) owns 50.9 per cent of the shares, which are divided based on the volume of oil each handles.

Here's an excerpt from Trans Mountain's response to an information request from Robyn Allan as part of the NEB hearing: 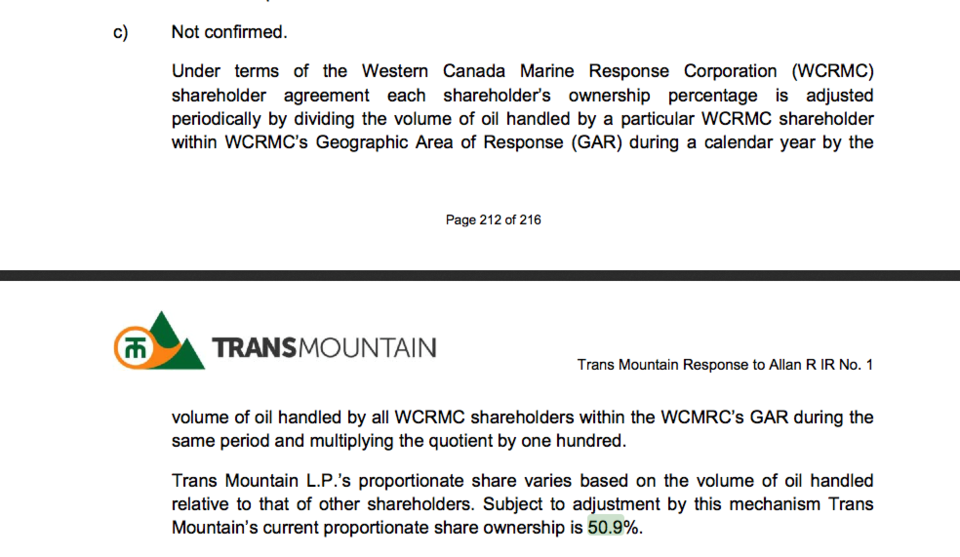 So would Kinder Morgan profit from an oil spill? WCMRC is not publicly traded and doesn't pay profits to shareholders per se, so it's not like they are making money off this oil spill.

However, there is a way Kinder Morgan could stand to benefit. Let's just say the Marathassa had to pay millions to WCMRC for cleanup costs from last week's spill, and WCMRC was suddenly flush with money. That money could be used in a couple of ways, according to a conversation I had with WCMRC spokesperson Michael Lowry. It can be used to lower future fees for Kinder Morgan and the other partners, or it could be used to invest in new equipment.

So they could get a kickback in the form of lower fees, but it's not like they're making money on oil spills. You all probably remember news of Kinder Morgan's statement that oil spills could have economic benefits because of the cleanup activities. They took a PR beating for that one and probably won't make that argument again.

I also asked Kinder Morgan to clarify all of this last week, but the normally responsive communications people have gone silent on me. My guess is they want to lay low and not be associated with this spill in any way. The thing is, the Marathassa spill will galvanize public opinion against Kinder Morgan's Trans Mountain expansion plan. We also asked for an interview on that angle - how the spill would affect public perception - and we were told no one was available.