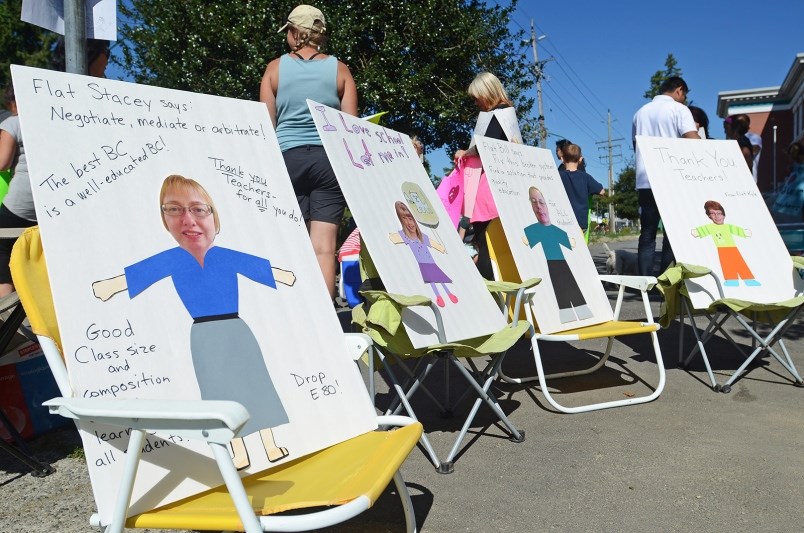 A Gilmore Community Elementary School family shows support for teachers and education despite not being able to attend a parent "sit-out" at the school in person in the fall of 2014. Class size and composition - which has long been a bone of contention between the teachers' union and the B.C. government - is now the subject of a Supreme Court of Canada ruling, in favour of the BCTF.Cornelia Naylor, NOW files

It's as if the B.C. education system just won the lottery.

The Supreme Court of Canada ruling that B.C.'s teachers union has the right to negotiate such things as class size will almost certainly inject hundreds of millions of dollars into the system.

The ruling means that at the very least many, many more teachers - and specialist teachers, librarians etc. - will have to be hired. That will cost money, which is where the hundreds of millions of dollars estimate comes from.

The winners here are not just teachers, but students, parents and pretty well everyone touched by the K-12 education system.

The positive impact on classrooms can't be overestimated. Teachers I correspond with (many over the years) have told me an alarming number of stories of how their classrooms are often "unteachable" because they have so many students who need extra attention because of their various special needs but don't receive it because there simply is not enough trained staff to provide it.

Oddly enough, the court ruling is also potentially good news for the B.C. Liberals, despite the embarrassment of that court loss. More on that in a bit.

Back to this long-running battle between the B.C. Liberal government and the B.C. Teachers Federation. In 2002, the government arbitrarily stripped language defining class size and staffing rules out of the BCTF's collective agreement.

The government felt the language made staffing decisions incredibly restrictive and totally inflexible. Principals and school superintendents felt their hands were shackled when it came to making decisions they felt made sense.

The fact the language was agreed to by the previous NDP government also played a role in the B.C. Liberal government's decision to simply banish the language out of existence. Remember, the government was holding a 77-2 majority in the legislature and arrogantly thought it could pretty well do anything it wanted.

Remember, too, that the government also arbitrarily tore up a contract with the Hospital Employees' Union, a move that was also ruled unconstitutional by the courts.

The BCTF went to court and won, twice. The government appealed, and won. And now the high court has swung the decision back into the union's favour.

The government and the BCTF will now sit down and negotiate how to move forward. This is where things may get interesting.

The BCTF may argue the old language is now back and so it shall remain, untouched. The government will likely argue the court's ruling effectively translates into a need for both sides - not just one - to bargain in "good faith" for a final settlement.

As much as disputes between the BCTF and the government usually involve money, it's important to note that the issue of which side controls the classroom is really at the heart of these fights.

I can't see the BCTF giving up much control if it sees no need to. On the other hand, the language that existed up until 2002 may be out of date (keep in mind, the definition of what constitutes "special needs" students has changed dramatically since then) and the union may want to make changes to it.

But for the government to show it is bargaining in good faith, it clearly needs to hire a substantial number of teachers to reduce class sizes, which will cost all that money. Even if the two sides can't agree, remember there can't be any job action or strike action because the collective agreement doesn't expire until 2019.

Now, to the point that there may a silver lining in all this for the B.C. Liberals.

Keep in mind that Finance Minister Mike de Jong  delivers his next budget in early February.

And if that budget shows, say, a huge $200 million increase in the education budget (potentially the biggest annual increase in provincial history) as likely required by the courts?

Why, just a few weeks later the election campaign begins.

It will be ironic in the extreme if a government that stubbornly refused to bend to demands for more funding for education for more than a decade is suddenly able to crow about a huge budget hike as it heads into that campaign.

Whether many folks buy that is another matter.