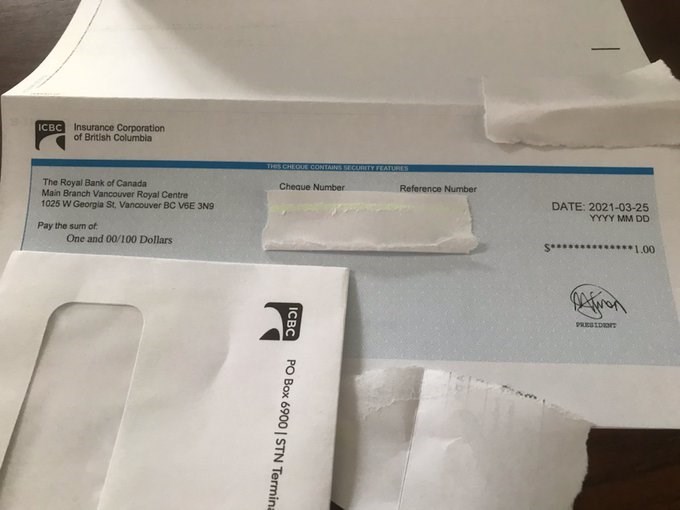 That’s what one Burnaby NOW reader wanted to know after they received an ICBC rebate cheque for a measly $2.

“It’s really insulting,” the reader wrote. “I mean why bother? I could have really used more.”

I saw another person tweet out about how their mother got an ICBC rebate also for just two smackeroos.

They can’t believe it.

I feel downright lucky after getting my rebate that was in the hundreds. It didn’t feel like enough at the time I received it, but after seeing the experience of other people, I am not going to complaint one bit.

People have been waiting in eager anticipation for their juicy ICBC rebate cheques – especially after Premier John Horgan called the one-time rebate cheques are "the largest single give-back to policy holders in Canada through COVID-19."

I wrote previously about a Burnaby driver named Christopher who tweeted out – with great sarcasm - that he got his ICBC rebate for just 26 bucks.

Then there was the Coquitlam woman who got an ICBC cheque for only $1 – I imagine all the people who got $2 will feel lucky at receiving “double” the amount.

“I was in disbelief and I thought: ‘this has got to be some kind of mistake or joke,’” said Shari O’Neill, whose post of a photo of the cheque went viral on social media.

The cheque was one of the first batches being mailed out by ICBC after a cyber attack hit the third-party cheque vendor, stalling the initiative.

She expected to receive at least $200 back for the two cars after the B.C. government said cheques would range from $25 to $400 when the rebate plan was announced in February.

O’Neill said sending the cheque for $1 was a waste of time and money and it would have made more sense if the government just credited the amount on people’s insurance for the following year instead of mailing out cheques to people in amounts so small as to be useless.

Solicitor General Mike Farnworth, who is the minister responsible for ICBC and a Port Coquitlam MLA, said in February the rebates were the result of balancing lower claims costs during the pandemic with other considerations, such as lower premium revenues.

"The vast majority of people who insured their vehicles in the early months of the pandemic will see on average a rebate of $190," he said at the time.

On its website, ICBC stated that it has begun mailing COVID-19 rebate cheques in small batches directly to eligible customers and continues to work on options to send out more cheques in the coming weeks.

ICBC estimates that 0.2% of cheques will have a value of $1.

Maybe they will be able to buy a piece of candy, or a pack of matches.