I had a conversation online with some Burnaby residents on Monday about the latest Trans Mountain oil spill. Some of them hadn’t heard about the spill so I gave them the details about as much as 190,000 litres of light crude spilling.
Jun 16, 2020 9:29 AM By: Chris Campbell 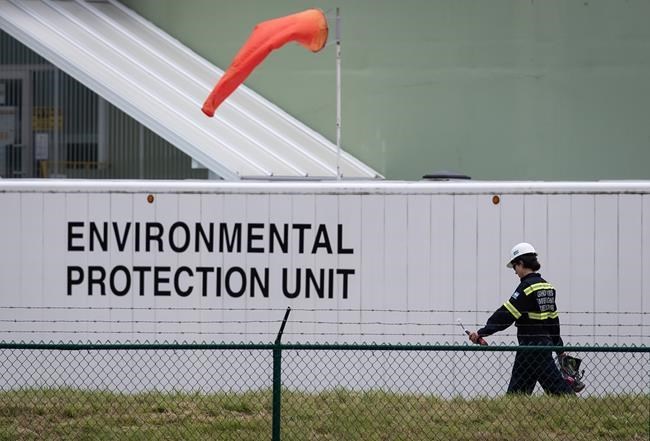 An emergency response worker carries an air monitoring device at the site of a crude oil spill at a Trans Mountain Pipeline pump station in Abbotsford, on Sunday, June 14, 2020. Trans Mountain says oil is flowing again through its pipeline after as much 190,000 litres of light crude spilled from a pumping facility in Abbotsford, B.C. THE CANADIAN PRESS/Darryl Dyck

I had a conversation online with some Burnaby residents on Monday about the latest Trans Mountain oil spill.

Some of them hadn’t heard about the spill so I gave them the details about as much as 190,000 litres of light crude spilling.

“Where did it happen,” one of them asked.

“Oh, so not here? Whatever,” was the response.

That’s the thing about working for a community newspaper. At the NOW, we’re pretty hyper-local when it comes to the stories that our staff write about because that’s what our readers are most interested in.

If it’s not related to Burnaby in a really specific way, many readers tune out.

But this story does relate to Burnaby in a really specific way, so I was alarmed by the response. Yes, it happened in Abbotsford, it could just as easily happen in Burnaby because of how much Trans Mountain infrastructure is in our city. Pipelines. A tank farm. A marine terminal.

Imagine if the spill happened near one of our local rivers or Burrard Inlet.

Trans Mountain says oil is flowing again through its pipeline after the spill at a pumping facility in Abbotsford.

A statement from the Crown-owned company says the pipeline was restarted Sunday afternoon. The line was shut down early Saturday when an alarm was triggered at the Sumas pump station.

I find it a little alarming that the pipeline was restarted so quickly when there is an investigation still taking place. Trans Mountain linked the cause to a fitting on a 2.5-centimetre pipe, and says the oil was contained, recovered and slated for disposal.

A statement posted late Sunday by the federal Environment Ministry says Trans Mountain's is co-ordinating the response at the site, along with environmental and emergency contractors.

The ministry says there has been no reported impact to groundwater, but monitoring continues.

He said in a statement that it happened just south of a cultural and burial ground of great significance to his people.

"Our main concern is for the cleanup of this spill and preventing further impacts to our territory. We need to have our monitors on the ground immediately."

Trans Mountain said crews at its incident command post were working on the cleanup with local officials, area Indigenous groups, the Canada Energy Regulator, the Transportation Safety Board and the province.

The pipeline moves about 300,000 barrels of crude a day between Alberta and B.C.'s waterfront terminal near Vancouver.

The federal government approved expansion of the Trans Mountain pipeline last June that will triple its capacity.