Opinion: Did COVID kill Trans Mountain protests in Burnaby? Or was it jail?

Way back in April, Trans Mountain’s tank farm in Burnaby was the scene of a protest, with the company accused of not following social distancing measures amid the COVID-19 crisis.
Aug 3, 2020 6:00 AM By: Chris Campbell 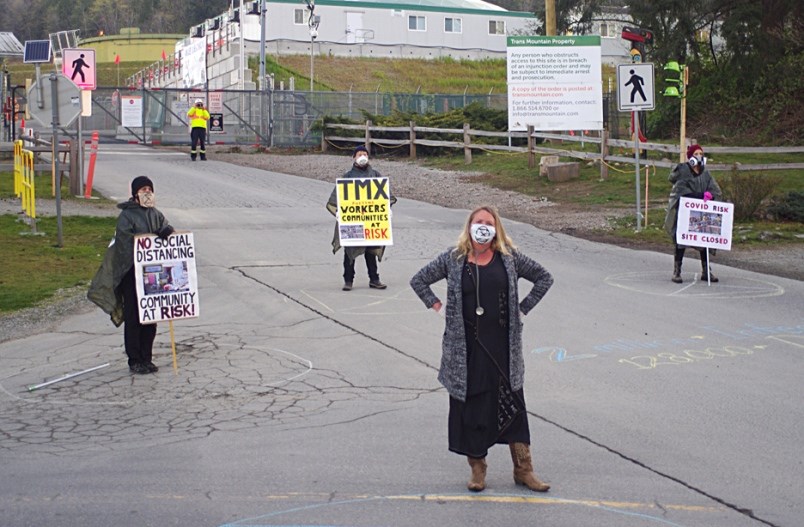 Way back in April, Trans Mountain’s tank farm in Burnaby was the scene of a protest, with the company accused of not following social distancing measures amid the COVID-19 crisis.

Members of a group called Extinction Rebellion marched a funeral casket labelled “Covid Kills” in front of buses carrying workers heading to the tank farm in North Burnaby. (The company denied the accusations and you can read more here.)

Nobody was arrested at this protest, as far as I know, which makes it unlike most of the protests in Burnaby during the past few years. We’ve seen a long list of arrests at the tank farm and at the Westridge Marine Terminal in Burnaby on Burrard Inlet over the years.

As for 2020, other than a protest by SFU students at the Burnaby campus back in March, this year has been really quiet.

It’s surprising to me, in a way, because I’ve been told big protests were on their way for about the past 18 months. I’ve received emails about plans and seen messages posted on social media threatening to shut the Burnaby sites down every time there is a new court victory by Trans Mountain.

The latest was in July whenSupreme Court of Canada declined to hear a case from the Squamish and Tsleil-Waututh Nations that could have halted the Trans Mountain Pipeline expansion for a second time.

When opponents lost yet again in court, I saw more chatter about how protests were in the works.

Now, obviously, we’re in the midst of the COVID-19 pandemic and that would definitely put the brakes on some protests. But as we’ve seen with Black Lives Matter, many inspiring protests are still happening in Metro Vancouver.

So, what’s the other reason why people who were so fired up to protest have now gone silent as far as going onto Trans Mountain property in Burnaby?

When I took over at the NOW in 2018, there was a protest every few days, with people of all ages getting arrested in Burnaby. There were so many, I hired extra staff on weekends to cover them all.

But then the court system started getting tougher as far as jail sentences go.

Rita Wong was sentenced to 28 days in jail by Justice Kenneth Affleck of B.C. Supreme Court in 2019. The sentence followed Wong’s peaceful protest on Aug. 24, 2018 at Trans Mountain’s Westridge Marine Terminal that violated a court injunction. Protesters have previously received fines or jail sentences ranging from seven to 14 days. The other 28-day sentence was handed to David Gooderham.

I don’t think it’s a coincidence that protests started to tail off as jail sentences got longer and longer.

Meanwhile, earlier this week at my Burnaby Mountain apartment, I received in the mail a multi-page construction notice from Trans Mountain.

In it, Trans Mountain talks about “plans to begin pipeline construction” of the expansion project subject to approvals and permits. The pamphlet details a whole range of sites in Burnaby, Coquitlam, Langley, Surrey and other locations where work will take place soon.

Perhaps protests will start up at these other locations in order to block work.

I see a lot of talk about protesting, but when you know you might face a month or more in jail, that becomes a scarier proposition.