The delivery by hand of “disgusting” and “explicit” flyers and pamphlets is spreading to more Burnaby neighbourhoods.
Jul 2, 2020 1:26 PM By: Chris Campbell 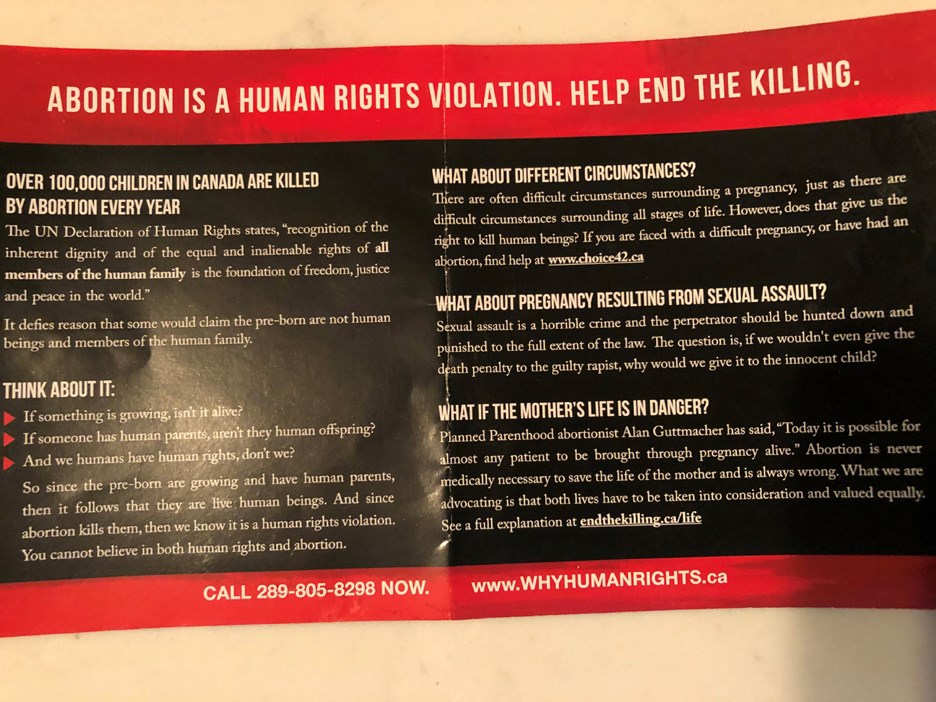 Flyers being delivered by hand to Burnaby residents. Screenshot

The delivery by hand of “disgusting” and “explicit” flyers and pamphlets is spreading to more Burnaby neighbourhoods.

Just weeks after I wrote about the arrival of this anti-abortion material, more Burnaby residents have been calling and writing in about their children being exposed to this unwanted propaganda.

Dustin is one of them. This Burnaby father of two children actually photographed the material and emailed it to me.

Right after his children saw it.

“My kids went to get my neighbours mail as they were away,” Dustin said. “I found our 7 and 4 year olds sitting on my neighbour’s front lawn looking at that disgusting anti-abortion pamphlet. My 4-year-old ran to his room screaming. I phoned the RCMP and they said they would call the company to suggest they don’t distribute them that way. They didn’t care to find the person distributing them.”
I’ve included a photo below of one of the images because some readers said they wanted more "proof," but I have blurred out the more disgusting parts of it.

People have a right to print up flyers like this, but I don’t feel they have the right to step on private property and inflict this on people.

I wrote recently about Keith, a Burnaby resident with two young children who get a kick out of going to grab the daily mail from the box outside his home.

“(They) would have been greeted by very explicit images that should not be shown to kids,” said Keith.

Keith checked the footage from the security cameras he had installed and they show a woman with a stack of the flyers dropping one off.

The flyers were not delivered in a sealed envelope and Keith thinks that, at the very least, they should be.
“As the pamphlets are not delivered in a sealed envelope, they often end up in the hands of children,” he said. “And the girl delivering the flyers could clearly tell we have kids by the amount of kids’ stuff around our yard. Distributing graphic images like these, which easily end up being viewed by children, should be illegal. Movies, books and games all have a rating system and packaging must be made appropriate. These images are worse, and should be provided only with a warning.”

Keith and Dustin want to warn other Burnaby parents about the flyers being delivered by hand to residents to ensure their children aren’t “exposed” to this kind of material.