I’m happy that people enjoy riding a motorcycle, but you won’t catch me on one. I’ve read too many statistics about people being killed or maimed while riding one.
Jul 13, 2020 6:51 AM By: Chris Campbell 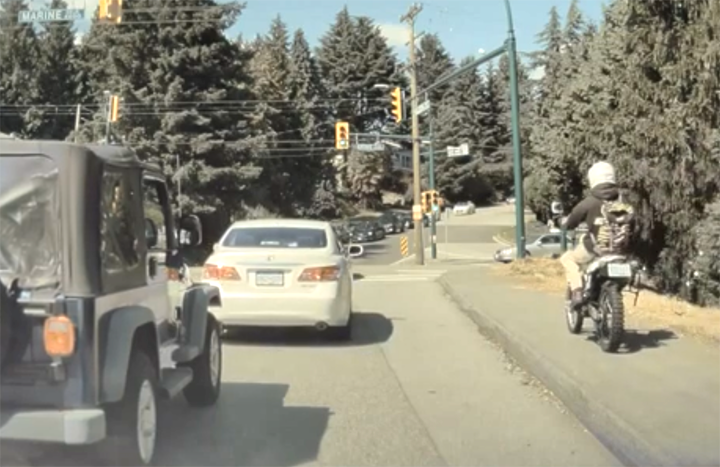 A motorcyclist in Burnaby on the sidewalk. Tristan Calvo photo

I’m happy that people enjoy riding a motorcycle, but you won’t catch me on one.

I’ve read too many statistics about people being killed or maimed while riding one. When a motorcyclist crashes or is hit by another vehicle, being on a bike is unforgiving. The rider is left more vulnerable than being in a car or truck.

So I have sympathy for motorcyclists. Multiple motorcyclists have been killed in Burnaby, including at least five since 2018.

But my sympathy ends when I see motorcyclists engaging in dangerous, entitled behaviour. You know what I mean by entitled. They feel because their bikes are skinny that they can squeeze in between lanes of traffic, especially when they don’t want to wait in a line-up of vehicles.

And then there is the person pictured above or in the two videos below (captured on dash cam by Tristan Calvo). This motorcyclist didn’t want to wait behind a few vehicles stopped in Burnaby at Marine so they hopped the curb and rolled right on by them.

It’s dangerous to themselves, other drivers and to a pedestrian or cyclist who might come around that hidden corner by the stop sign. Hedges block the view of the motorcyclist so they can’t see if someone is coming around that corner.

Just wait in line the rest of us.

Riding a motorcycle is dangerous enough without having a death wish. Just because you can do something doesn't mean you should.

At least two people will die in motorcycle crashes on B.C. roads each weekend this summer, if this year follows the same trend as other years.

There were 51 deaths related to motorcycle crashes in the province in 2018 — the highest number recorded in the past decade, according to a B.C. Coroners Service report.

“We were surprised to see such a big jump from 2017 to 2018 in terms of the number of deaths,” said Andy Watson, manager of strategic communications for the B.C. Coroners Service.

He noted that the count includes any death resulting from a crash that involved a motorcycle and could include a pedestrian or a passenger or driver of another vehicle. Most deaths, however, were motorcyclists.

An August 2018 Coroners Service report found that motorcyclist speed and impairment were the leading contributing factors in motorcyclist deaths that year. Motorcyclist error and inexperience contributed to about 10 per cent of deaths.