Burnaby restaurant owners and workers relieved to be back at work
Jun 6, 2021 8:10 AM By: Chris Campbell 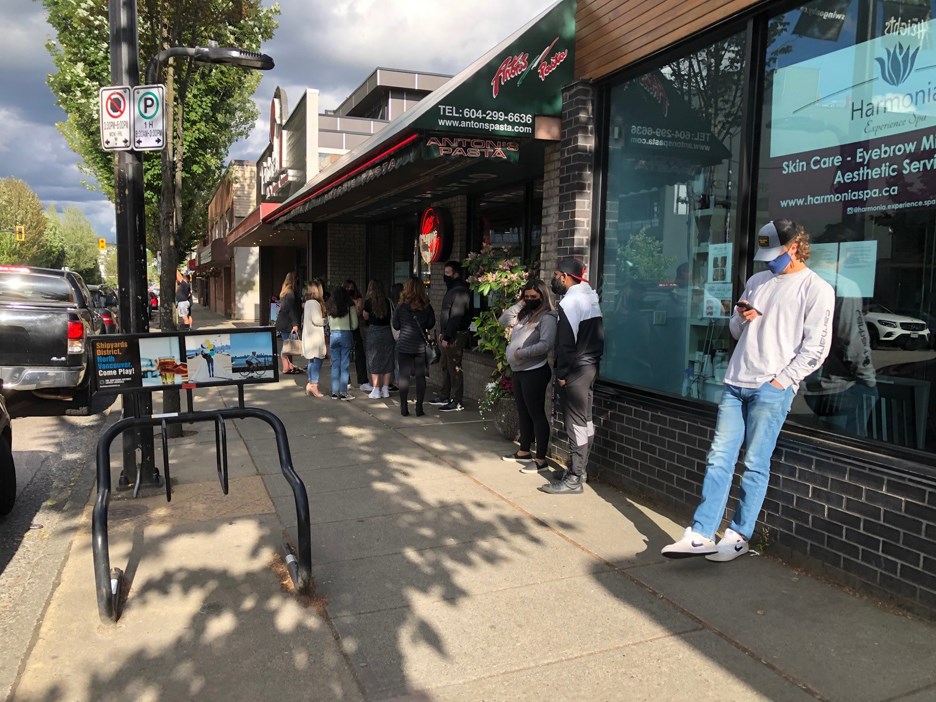 The scene on Saturday night outside of Anton's Pasta Bar.Chris Campbell

You know how I know that? Because there are long lineups outside of Anton’s Pasta Bar on Hastings in Burnaby Heights.

I’m joking of course, but it is a sign that life is returning to something resembling normalcy as the B.C. restart plan kicks in.

Restaurant owners and their workers are breathing a sigh of relief after being allowed to reopen.

I went to a Burnaby eatery on the first day of reopening and the staff were positively beaming. I’m not kidding – the smiles were huge and staff were literally high-fiving each other.

“We are holding on by our fingernails,” wrote one Burnaby restaurant owner I have been conversing with throughout the pandemic. “But we’re finally back and I think we will survive this if things continue to improve.”

Some people, of course, aren’t ready to return for in-person dining and are still doing takeout. Others will be sticking with home cooking for the foreseeable future.

But I’ve checked out a lot of Burnaby restaurants and they seem to be bustling, at least on Fridays and Saturdays. The rest of the week is still a struggle for some restaurants. The Brentwood Cactus Club was really quiet last Monday, but the bartender said other days have been good. So things are still precaious for restaurants. Not all of them will survive.

And then there is Anton’s, the place with Burnaby’s biggest portions of house-made pasta. Seeing people lined up outside on Saturday evening was, as I said, a nod to how things used to be.

So, what comes next?

With 60 per cent of British Columbia's population having received at least one dose of the COVID-19 vaccine, the first "Restart" threshold has been met in the plan, for which each phase depends on provincial vaccination rates and a continued decline in case count.

Restaurants have been allowed to welcome guests for indoor and outdoor dining for tables of up to six guests with safety protocols in place.

Of note, those six people do not have to be from the same household, which means you can get together with friends, families, and colleagues at restaurants.

What's to come in each Phase of the restart plan

The earliest date B.C. will move into Phase 2 is June 15; at that point the province must be at 65% of population with at least one dose of the COVID-19 vaccine administered and a continued decline in case count and hospitalization.

While masks will still be mandatory for indoor public spaces, when we reach Phase 2 is when banquet halls in the province will be able to re-open with safety protocols in place. At this stage, as well, there will be consultations within the sector on what further changes would look like as restrictions lift.

Phase 3, which needs a vaccination rate of 70 per cent province-wide as well as a continued decline in case counts and hospitalizations, is when the six-person limit on tables at restaurants will be lifted. The earliest this will happen in B.C. is July 1, and new safety plans for restaurants will be in place.

Those new safety plans will carry through into the fourth and final phase, which requires more than 70 per cent of our provincial residents to be vaccinated and which will begin no sooner than September 7.

"We have been on a long and tiring journey, and now we can start to chart our path forward to brighter days ahead," says Dr. Bonnie Henry, B.C.͛s provincial health officer.

Summer markets in Burnaby will have food trucks, art and entertainment
Jun 5, 2021 5:54 AM

Amazing Brentwood opens chic food court that will even have its own pub
Jun 5, 2021 6:24 AM

Opinion: This is Burnaby’s perfect takeout dish amid COVID-19 restaurant restrictions
Apr 17, 2021 8:23 AM