Opinion: These ghost developments are ruining parts of Burnaby

The southwest corner of Bainbridge and Lougheed in Burnaby used to be a bustling little neighbourhood hub. I especially enjoyed hanging out in the Soho bar that now sits empty. It’s sat empty for a long time – years even.
Feb 1, 2020 6:30 AM By: Chris Campbell 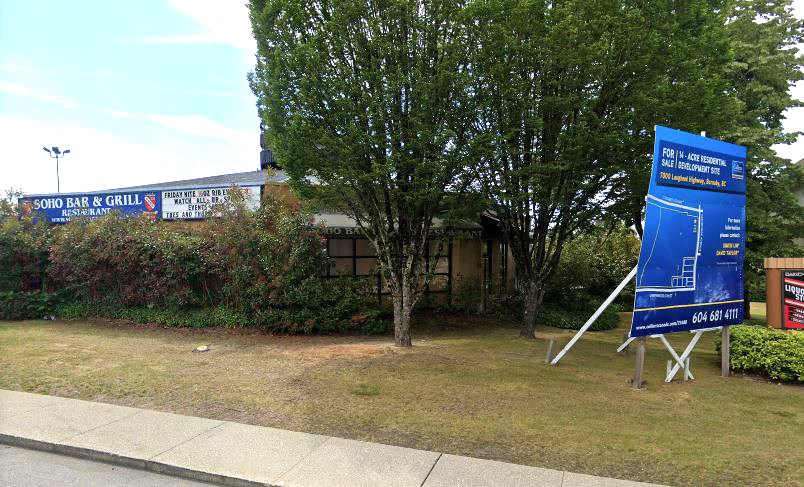 The corner of Lougheed Highway and Bainbridge in Burnaby. Chris Campbell photo

The southwest corner of Bainbridge and Lougheed in Burnaby used to be a bustling little neighbourhood hub.

I especially enjoyed hanging out in the Soho bar that now sits empty.

It’s sat empty for a long time – years even. The rest of this little business area sits mostly empty as well.

That’s the problem when you have land worth hundreds of millions of dollars if it can be developed into highrise towers.

Once the landowners decide that housing development is the direction they want to take, the existing tenants of a property often leave because there is no future. Once those tenants leave, a parcel of land can sit empty for years until a project is approved.

I’m not trying to pick on this particular piece of land, but it’s a glaring example. It’s been decaying for years and will likely continue to rot for years to come. It’s unclear if this area will ever be developed.

It sits next to the Saputo dairy plant, which is set to move to a new facility in the Tri-Cities. That land has been sold for hundreds of millions of dollars. The properties are a short walk to the Sperling SkyTrain Station. Being close to rapid transit makes this land worth gold, but this area is not one of Burnaby’s four town centres (Metrotown, Edmonds, Lougheed and Brentwood), so perhaps council will not be in a rush to allow development.

A chunk of land directly east of the Saputo plant is a bloody eyesore. A Telus industrial complex was torn down in 2015 and now it’s just a concrete crater that looks awful when you pass by on Lougheed.

With this 14-acre parcel of land now mired in a huge lawsuit between Telus and Polygon Homes, it’s anybody’s guess how long it will stay an eyesore.

And that’s a big problem. These properties are left to wither on the vine for years, leaving ghost towns where thriving neighbourhoods should be.

That’s not good for Burnaby, but that’s what the real estate gold rush has wrought.