Opinion: This Burnaby landlord’s letter is a vile insult to all renters

April 1 has come and gone with thankfully few attempts at April Fool’s Day pranks. Just not the right time. That’s because April 1 was rent day and there are a lot of people out of work who were short of money to pay the rent.
Apr 5, 2020 5:57 AM By: Chris Campbell 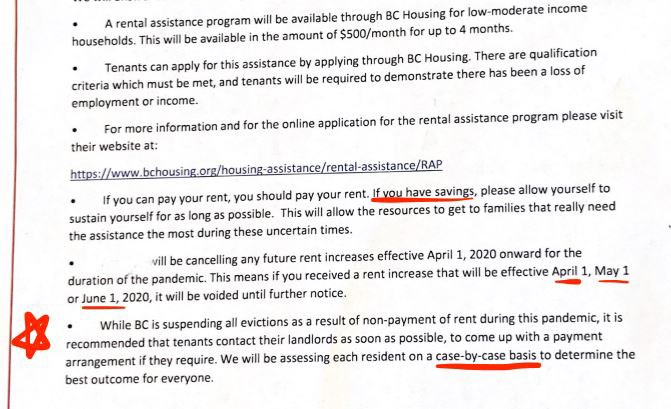 A letter from a landlord to a Burnaby tenant. Screenshot

Just not the right time.

That’s because April 1 was rent day and there are a lot of people out of work who were short of money to pay the rent.

It’s a stressful time for everyone, but particularly for renters who have lost their jobs, but haven’t received any of the emergency federal or provincial funding that’s been promised.

In the middle of all of this, one Burnaby landlord sent a letter to tenants that is just so condescending and vaguely threatening that it has added to the stress.

The letter was forwarded to me by a Burnaby resident who received it just days before April 1. I am not naming the person or the landlord because the person who sent the letter lives in fear of being identified somehow. I don’t want to make life worse for them, but wanted to share the messaging coming from some landlords right now.

Not all landlords are bad. I’ve seen isolated cases of some who have told tenants to not worry about rent for April at least.

Other landlords, especially corporate ones that manage large buildings, have carefully crafted messaging that sounds supportive, but really isn’t.

There’s a screenshot above, with the tenant who sent it highlighting some of the messaging.

Then it tells tenants they should be milking their savings, if they have savings. Again, a condescending thing to put into a letter. (Many renters don’t have savings because rents in Burnaby are some of the highest in all of Canada.) Oh, it also tries to guilt people with some savings by saying there are other families in worse shape.

Then the letter says it is cancelling rent increases in the next few months, as though it was their idea and not literally mandated by the provincial government. Pro tip: Don’t take credit for something the government is forcing you to do because we know if Premier John Horgan hadn’t done it, you would have still tried to hike the rent during the pandemic.

Then there is a veiled threat when it comes to the topic of evictions, saying it will it will be “assessing” tenants on a “case-by-case” basis.

“I found their ‘case-by-case’ comment as them basically saying they are going to do what they want in regards to them evicted people,” said the tenant who contacted me.

Sadly, some landlords don’t have your backs during this crisis, despite millions potentially being thrown out of work for who knows how long.