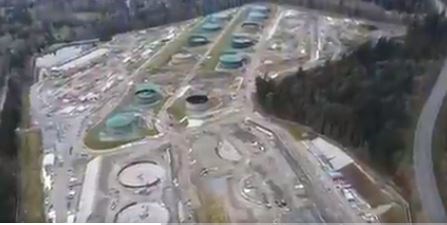 For those who don’t know it, I live on Burnaby Mountain.

So perhaps it’s hypocritical to criticize the Trans Mountain pipeline expansion project for the damage it has done to the mountain while also living in a housing development that isn’t exactly a high watermark for the environment.

But I didn’t approve this housing development – I just live here and housing is vital.

What isn’t so vital is this project, which has raped the mountain beyond recognition with the addition of new tanks at the tank farm.

Just look at the video below posted on Twitter by Dogwood BC and see how the mountain has been torn apart in so many different areas as the tank farm has expanded.

In previous days, when you drove around the city you could see the tanks in the distance but they didn’t really register that much.

Today, the site is a disgusting canker sore on our beautiful Burnaby landscape. Along with this blight comes an assortment of risks to the forest and the surrounding residents from the material inside the tanks.

And now, Trans Mountain is doing more damage by cutting down more than 1,300 trees along the Brunette River in Burnaby west of North Road.

The City of Burnaby opposed it, but forces above all of our pay grades said “screw it, cut ‘em down” as though trees were some nuisance.

Work on cutting those trees has temporarily stopped. Environment and Climate Change Canada (ECCC) has confirmed that following federal inspections the tree cutting has been ordered halted.

#TransMountain is using taxpayer money to build 14 new oil storage tanks above the city of Burnaby, for a total capacity of 5.6 million barrels. Nowhere else on earth would this be allowed so close to houses, schools or a university campus (see tennis courts for scale). #StopTMX pic.twitter.com/IdAGB36lCr

ECCC enforcement officers visited the TMX work site at the Brunette River Conservation Area following a tip from a local activist group called the Community Nest Finding Network (CNFN). According to an email from ECCC, the officers identified nests of Anna's hummingbirds and sighted other migratory bird species in the area, including Song Sparrows, Pine Siskins, American Robins and Black-capped Chickadees.

“Given that it is nesting season, migratory birds are particularly vulnerable at this time,” the email reads. “Cutting vegetation and trees or carrying out other disruptive activities such as bulldozing or using chainsaws and heavy machinery in the vicinity of active nests will likely result in disturbance or destruction of those nests. The disturbance or destruction of a nest of a migratory bird is a contravention of the Migratory Birds Regulations.”

Members of the Community Nest Finding Network reported the chainsaws had fallen silent ever since the inspection on Monday, April 12. The ECCC confirms those claims as enforcement officers had told the crown corporation that day to “immediately cease any activity, work, or undertaking” on the work site referred to as Construction Work Package 98 or CWP-98 located along an approximately 1,100 meter stretch of land.