Only a few weeks have passed since Burnaby resident Charles Masala, a father of two, was killed by a driver while he was out riding his bike.
Jul 17, 2019 9:55 AM By: Chris Campbell 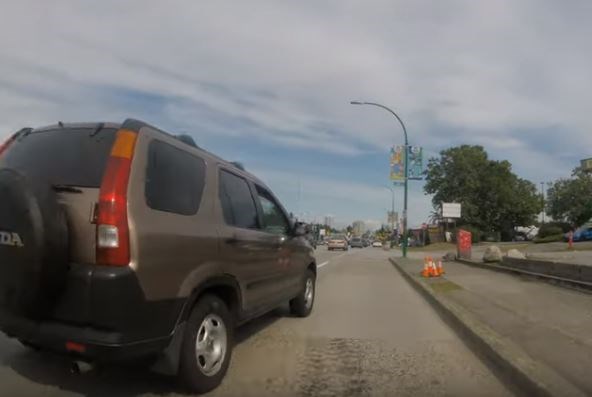 Look how close this driver got to a cyclist on Kingsway in Burnaby. The cyclist has a right to be in the right lane. Screenshot/Tristan Calvo

Only a few weeks have passed since Burnaby resident Charles Masala, a father of two, was killed by a driver while he was out riding his bike.

You would think this news would have spread enough and still reverberate in the minds of drivers to take care around cyclists and pedestrians.

You would think wrong.

Burnaby NOW reader Tristan Calvo sent in this terrifying video of an incident on Kingsway in South Burnaby on Tuesday.

In the video, seen below, his wife is nearly hit by a psycho driver while she is riding her bike in a bike lane. Like, it's really close and the driver was really booking it..

“Today, someone maliciously cut my wife off and honked their horn at her riding her bike in the bus lane,” Calvo said. “What is scary is that someone went out and intentionally put someone in danger because they were annoyed that they would have to drive a little slower.”

That basically sums it up.

Not only does the driver come close to hitting Calvo’s wife, but honking the horn can easily jar a cyclist, making them swerve.

My guess is the driver is too stupid to realize cyclists are allowed in this lane.