We get a lot of letters to the editor sent to us here at the Burnaby NOW . They come mostly by email, although a few arrive by mail or are dropped off here at the office. Most are thoughtful missives on the news of the day.
Dec 23, 2018 5:54 AM By: Chris Campbell 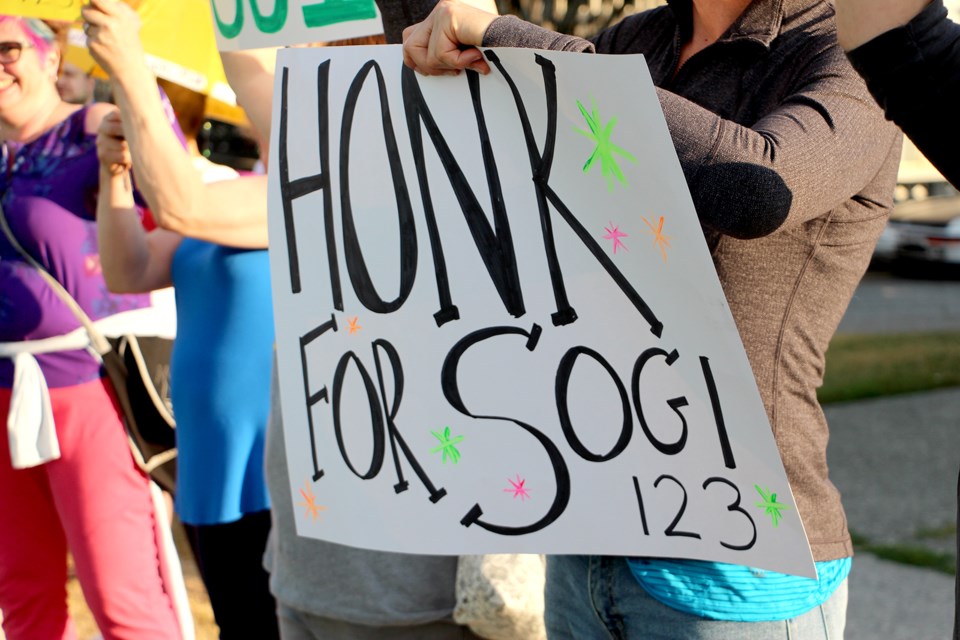 Demonstrators show support for SOGI 123 and the LGBTQ community during a rally in New Westminster.

We get a lot of letters to the editor sent to us here at the Burnaby NOW.

They come mostly by email, although a few arrive by mail or are dropped off here at the office.

Most are thoughtful missives on the news of the day. Some are half-baked theories. A tiny few are racist diatribes and conspiracy theories.

All are appreciated - except the racist diatribes, of course.

Feedback is an important part of a newspaper. It’s what connects readers to our stories.

I’ve spent the past few weeks sifting through our letters from 2018 to find the best one. It was a tough choice because there are some high-quality writers out there in Burnaby.

In the end, I chose a letter by Anna Schillaci-Ventura - a Grade 12 student at Burnaby Central Secondary School. As the Burnaby civic election raged on, one of the hottest topics in the school board election was the SOGI 123 program. Schillaci-Ventura’s letter was an expertly executed takedown of the arguments of those against this program. It was concise, passionate and eloquent.

“Editor: High school is always an awkward place. It’s a time when teenagers learn more about themselves and discover who they are. For those of us in Grade 12, it is a time of new challenges. We are on the cusp of a new place in our world – not children, but not adults. We will, however, be voting in the next election.

Discovering your gender and sexual identity in high school is always a difficult and awkward experience. I often hear that the world I live in is a more accepting world than the one experienced by previous generations. Yet I still hear kids in the hallway calling something they see as bad “gay” or calling other students “faggots.”

The SOGI 123 (provincial education resources are) for teenagers who are starting to realize they may not fit the societal norm of being cisgender and/or heterosexual. In my experience, teens are often at odds with their parents. It should come as no surprise that teens are reluctant to share their sexual identity with their parents. Many students live in a dual world where they outwardly conform to social “norms” that are based upon adult ideas of heterosexual gender identities.

They fear the many forms a negative response can take. SOGI is an environment where they can feel safe and accepted. It is a place where teens engage with other students and can be free of judgment.

I believe the new curriculum, SOGI 123, will help break down barriers and encourage discussion and understanding.

For Laura-Lynn Tyler Thompson – who has never known and will never know what it is like to be marginalized because of her sexuality – to say (in an interview with the NOW) that SOGI should not have a place in our school system shows a lack of empathy to LGBTQ+ teens everywhere. She openly defines any identity that is not heterosexual as a problem that requires the help of medical professionals, such as pediatricians and psychiatrists.

Tyler Thompson is entitled to her opinion. But opinions that seek to marginalize students based on their gender identity and sexual orientation have no place in school policy. And the people that support them have no place on a board of school trustees.