Heather Leung, the Conservative candidate for Burnaby North-Seymour, still hasn’t returned any of the messages from the Burnaby NOW to comment on her stands regarding social issues. But that doesn’t mean her stances aren’t available.
Jun 1, 2019 7:02 AM By: Chris Campbell 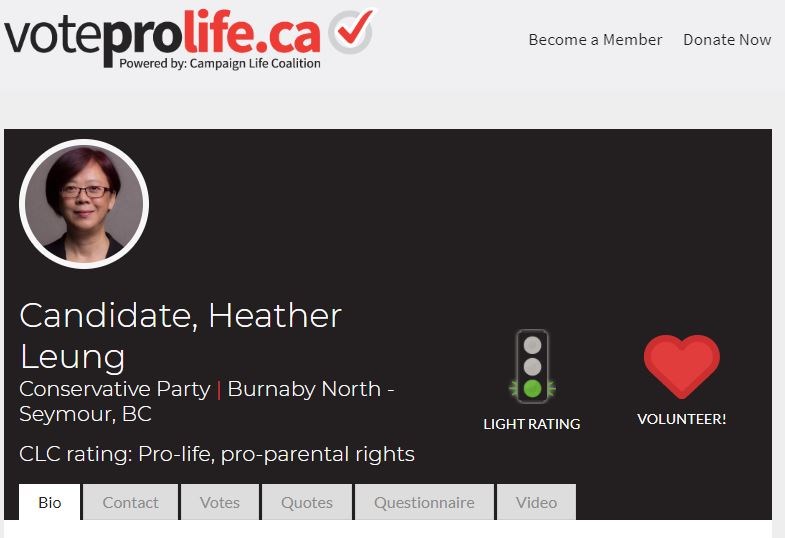 Heather Leung, the Conservative candidate for Burnaby North-Seymour, still hasn’t returned any of the messages from the Burnaby NOW to comment on her stands regarding social issues.

But that doesn’t mean her stances aren’t available.

For instance, her stand on abortion is quite clear based on the answers she has submitted to a website called “voteprolife.ca” by the group Campaign Life Coalition.

This is a national organization that grades candidates on their views about abortion and assisted suicide.

Leung answered this group’s questions and received a “green light” rating as “supportable.”

Leung said yes to this question: “If elected, would you vote in favour of a law to protect all unborn children from the time of conception (fertilization” onward?”

Of course, the Conservatives swear they are not re-opening the abortion debate, but Leung will be ready to vote just in case they do.

Apart from not respecting a woman’s right to choose what to do with her own body, it’s the last question that I find particularly disturbing. It asks if there are “any circumstances under which you believe a woman should have access to an abortion.”

So if a woman gets pregnant after being raped, Leung is all for forcing that woman to carry the baby to term.

In researching this column, I found a story from Friday about a group young women – children who had been raped - petitioning the United Nations’ Human Rights Committee to put pressure on countries to change their laws on this issue. They are saying that a child or a woman shouldn’t be forced into motherhood after being raped.

Canada, fortunately, protects a woman’s right to choose. Leung would be happy to take that away, even for rape survivors.

Maybe one day she’ll explain her stance on this issue with the media. For now, we’ll have to go with what she’s already said.