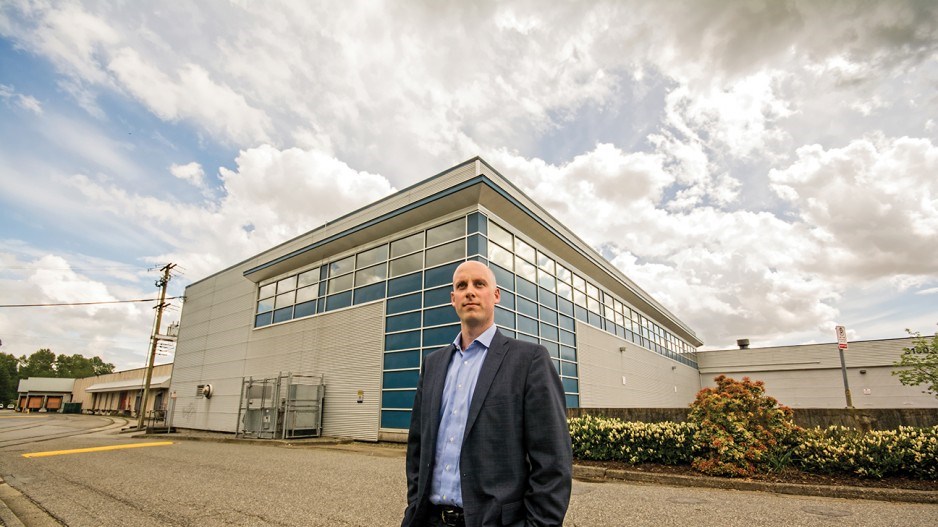 Stefan Morissette, a vice-president specializing in industrial real estate at Colliers International, at the new Daiya Foods location in Burnaby. The company’s deal for the 396,770 square feet at the former Brick warehouse cut industrial vacancies in the Lower Mainland by 10 percent. Photo: Chung Chow

While industrial developers eagerly eye farmland for new opportunities, food processors and distributors have spent the past year cutting some of the biggest deals for industrial space.

CBRE Ltd. reports that 31.3 per cent of Metro Vancouver’s top 10 lease transactions last year were to food and beverage companies, including the BC Liquor Distribution Branch, Loblaw Cos. Ltd. (TSX:L) and Golden Boy Foods Ltd.

“We continue to see strong demand with over one million square feet of current tenants in the market that are food and beverage-related,” said Chris MacCauley, a senior vice-president and veteran industrial broker with CBRE.

But with Daiya Foods Inc.’s recent deal for 396,770 square feet at the former Brick warehouse at 3100 Production Way in Burnaby, there’s even less space available than there was before.

The deal underscores the Lower Mainland’s industrial space crunch, because, according to Colliers International, it cut industrial vacancies by 10 per cent, reducing it to 1.5 per cent – the lowest in the country.

Tenants are now competing for about 3.6 million square feet of available space, and a diminishing acreage for new premises.

“It’s so, so tight out there,” said Stefan Morissette, a vice-president specializing in industrial real estate at Colliers who handled the Daiya deal with Andrew Lord.

“I have a client looking for 40,000 to 60,000 [square feet] of general warehousing space, and I’ve had to take him from Vancouver all the way to Campbell Heights because there’s only probably two or three options that are suitable in the next three to six months to occupy.”

The recent lease deal underscores that, putting Daiya in a space many times the size of the 30,000 square feet it previously occupied. Production of its plant-based food products will take place in half the building, while the remainder will handle distribution.

“They’re going to invest a substantial amount of capital in recreating the interior because it’s going to be [primarily] a cooler-freezer-production facility,” Morissette explained.

Its success follows that of other local agri-food startups that have grown to international stature, including Nature’s Path Foods Inc., Golden Boy Foods and many smaller companies that have taken advantage of Vancouver’s transportation links to import ingredients and export finished products. Other companies, like Soya World Inc. of Mississauga, have expanded into the region to serve local markets.

“We’re just a health-conscious society that creates these businesses that tend to grow globally, because we’re almost like a hub,” Morissette said.

While the unique demographic mix in the Lower Mainland attracts many ethnic-food businesses, the broader growth of the population means a greater volume of the products that are in demand is also required.

“[We’ve] been on a growth pattern for a long time, and food is always a requirement as population and income grows,” Morissette said.

But with older industrial space near the port being upzoned to office and other uses, even food companies are being pushed out. This space squeeze was highlighted two years ago when the city’s plans for a new arterial route along Malkin Avenue cast the future of the area’s produce distributors in doubt. The city is undertaking a consultation this summer on the issue, which remains a concern for local businesses.

Relocating local produce distributors would disrupt not only supply chains but the businesses’ historical and cultural links to the area and with each other, says Philip Wong, president of the Produce Terminal. It would also push them into a property market unable to offer a similar cluster of space.

Relocation of the BC Liquor Distribution Branch warehouse to Delta and Molson Coors’ (NYSE:TAP) plans for a new plant in Chilliwack highlight just how far the businesses would have to go to find a similar arrangement of premises.

Redevelopment is transforming the vacated premises, often with small-bay space hosting niche operators, such as the several craft breweries in the historic industrial areas of Mount Pleasant and adjacent to the port along Powell Street. It’s a similar story on Murray Street in Port Moody and even in Abbotsford. Four Winds Brewing Co. Ltd., meanwhile, is set to bust out of the space it has maxed out in Tilbury.

Since opening in 2013, it’s filled up four bays in its original building and leased an additional five bays in adjacent premises for a total of 18,000 square feet.

With large blocks of contiguous space in short supply, co-founder and sales director Adam Mills says Four Winds will have to be creative about future space requirements.

“We’re considering alternatives such as acquiring close-by additional warehouses for warehousing in the short term and, ultimately, working with a developer to build a large enough stand-alone building to facilitate our plans for future growth,” he said.