Josef Mengele was known as the "angel of death" and performed horrific medical experiments at the Auschwitz death camps
Apr 26, 2021 2:18 PM By: Elana Shepert 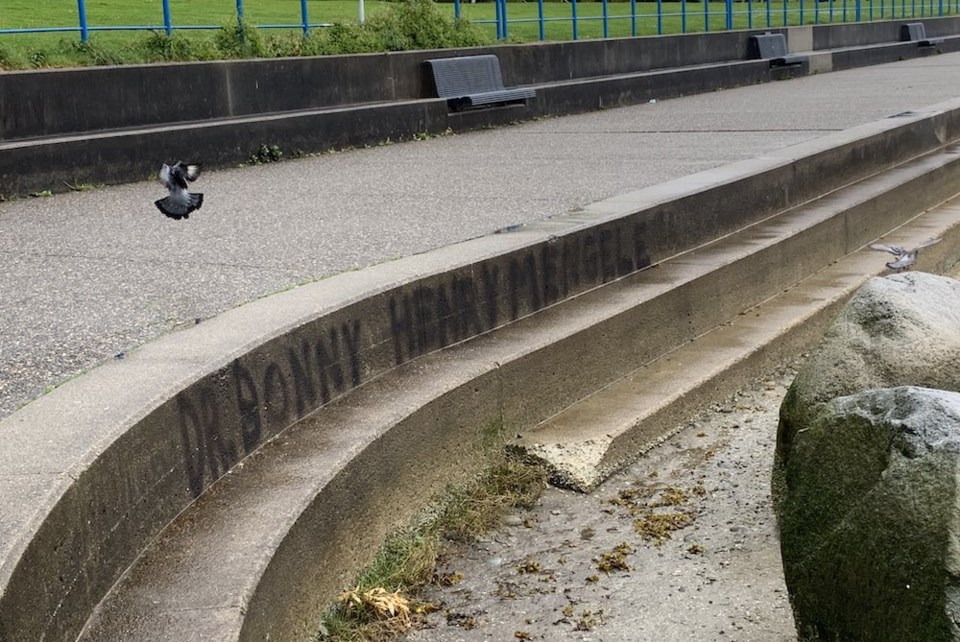 Vancouver Police are investigating graffiti on the seawall that compares Dr. Bonnie Henry to the chief physician at the Auschwitz concentration camp.Photo courtesy of Marsha Lederman

Vancouver Police are investigating a disturbing act of vandalism on the seawall that compares B.C.'s top doctor to the chief physician at the Auschwitz concentration camp.

The image reads: "Dr. Bonny [sic] Henry Mengele" in black spray paint. Josef Mengele was known as the "angel of death" and performed horrific medical experiments at the Auschwitz death camps; he also supervised the selection of prisoners who were murdered in Nazi gas chambers.

Marsha Lederman, Western Arts Correspondent at The Globe and Mail, shared an image of the graffiti on Twitter Sunday (April 15). She says she saw it near David Lam Park and added, "This was particularly awful for me to see - and it’s personal. My mother encountered Mengele on the ramp in Auschwitz in August 1944. The angel of death. She survived. Most didn’t."

What a terrible thing to encounter. ⁦@CityofVancouver⁩ please deal with this offensive idiocy on the seawall ASAP. pic.twitter.com/nEVNO9u6sS

In an emailed statement to Vancouver Is Awesome, the City of Vancouver says it was "made aware of the graffiti, and has covered it temporarily until it can be removed."

VPD spokesperson Cst. Steve Addison told V.I.A. in an interview that the incident is under investigation. No arrests have been made and the Diversity, Inclusion, and Indigenous Relations Section will be reviewing the file.

"We encourage people to call us as soon as they can--even if they don't see it happening--it allows us to assess the situation and observe what is perishable evidence," he said.

"We have ways to possibly identify graffiti artists based on the way they do the graffiti. Certain taggers can be identified based on their writing style or the kind of paint that they use or their location."

Antisemitic incidents on the rise across Canada

"As Canadians spent much of 2020 under pandemic restrictions and lockdown, antisemitism did not take the year off,” said Michael Mostyn, Chief Executive Officer of B’nai Brith Canada. “Though physical attacks decreased last year, online hate continues to skyrocket, particularly during a year that, more than ever, forced many of us to interact virtually rather than in-person.

Dozens of locals have also taken to Twitter to share their disgust and anger over the graffiti.

Vancouver City Councillor Pete Fry commented in response to Lederman's tweet: "Sorry you and anyone had to experience this. Obviously, a pretty clear indictment as to the repugnant frame of reference held by some of these anti-mask, conspiracy-espousing troglodytes.. in case [there] were any doubts."

Sarah Kirby-Yung, another Vancouver councillor, said the graffiti is "disgusting" and thanked Lederman for reporting it to the city.

Man arrested in Yaletown after allegedly threatening security guard with hammer
Apr 25, 2021 10:50 AM